Alethia and Ryan are periodically in the United States and available to speak to congregations as their schedule permits. Email them to extend an invitation to visit your congregation or organization.

About Ryan and Alethia White’s ministry

Since the Iranian Revolution of 1979, millions of Persian speaking peoples have migrated to other parts of the Middle East, to the United States, Europe, and other areas of the world. The migration continues and well over 100,000 Iranians have settled in Germany. The Iranian Presbyterian Church in Berlin, in addition to providing worship opportunities in Farsi, helps Iranian refugees and immigrants begin a new life in Germany. Ryan and Alethia White will work with the pastor and social worker of the congregation to offer pastoral care to those who are now making Germany their home. They will also collaborate with ecumenical partners to provide training and continuing education opportunities for leaders of the Presbyterian Church in Iran.

Many Iranians come to Germany seeking asylum because it can be reached overland and because the country has favorable laws for refugees. The IranianPresbyterian Church helps refugees navigate the legal system and gain asylum. The congregation and the PC (USA) collaborate with Berliner Missionswerk and other Christian organizations in  outreach ministries to the Iranian newcomers. They help them with the challenges of resettlement in Europe’s most populous and most industrialized country.

About Ryan and Alethia White

Ryan and Alethia go to Germany with a special sense of call to pursue Christ’s ministry of reconciliation.

“We are passionate about reconciling relationships across cultural, religious, and political divides, with the hope of promoting sustainable and peaceful partnerships,” Alethia says. “Through entering into relationships with others, by listening to their stories and extending hospitality, we hope to participate in this ministry as a family.” The Whites are accompanied in Germany by their daughter, Ariella, born just a year before they were appointed to mission service and their newest addition to their family, daughter Laila, born in June of 2015.

Alethia and Ryan both have a deep interest in the Middle East and its people. In 2007, while students at Fuller Theological Seminary, they participated in an eight-week practicum in Beirut, Lebanon. During her college studies, Alethia spent a semester in the Middle East with a cross-cultural education program. Alethia became interested in reconciliation and interfaith issues while in the Middle East and began sensing a call to mission.

Ryan traces his mission call to high school while on short-term mission trips to Mexico. His interest in the Middle East began at Fuller, where he met Alethia. “From the beginning of our marriage, we have considered mission service,” Ryan says. “We share a common calling to work for reconciliation, engage in interfaith conversations, develop peace building initiatives, expand worldviews and promote relationships between American churches and the people in the Middle East.”

The Whites say that their relationships with Middle Easterners have reinforced to them the importance of hospitality, and it’s a practice that they hold in high regard. “We have been touched by the overwhelming sense of hospitality expressed in the Middle Eastern context and hope to extend hospitality to those we encounter in Germany,” Ryan explains. “We hope to use our gifts of listening and extending hospitality to cultivate sustainable relationships with different people in the Iranian, German, and American communities.”

As they approach their ministry, Alethia and Ryan look to Paul’s letter to the Romans for direction: “Share with the Lord’s people who are in need. Practice hospitality.” (Romans 12: 13, NIV).

Immediately prior to entering mission service, Ryan served as a middle school math teacher for four years in Pasadena, California. He also has been a pastoral intern at Knox Presbyterian Church in Pasadena and a high school youth director at his home congregation, Bethany Presbyterian in Seattle. He was ordained through the Seattle Presbytery.

Alethia worked as an international coordinator for the California Institute of Technology’s Jet Propulsion Laboratory in Pasadena for four years prior to her mission appointment. Previously, she served as an executive assistant for the Center for Anabaptist Leadership/Pacific Southwest Mennonite Conference. She is a member of Pasadena Mennonite Church.

In addition to their master’s degrees from Fuller Seminary, Ryan earned a bachelor’s degree in Christian theology and educational ministry from Seattle Pacific University, and Alethia received an undergraduate degree in psychology from Eastern Mennonite University in Harrisonburg, Virginia.

Watch a video of Ryan and Alethia White 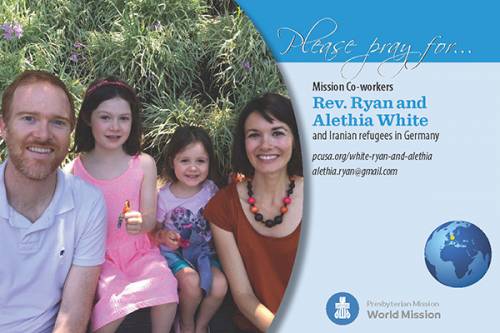 Use this card as you pray for mission co-workers Ryan and Alethia White. This card includes a photo and overview of their work. Ryan and…

Give in honor of the ministry of Ryan and Alethia White