Congregations: Give to D507565for Ryan and Alethia White’s sending and support

The Iranian new year, Nowruz, occurred on March 20, and we celebrated throughout the week with the church community and also with the larger Iranian community in Berlin. One evening a few days before Nowruz we joined a large, celebratory group of Iranians from all over the city for a pre–new year festival, Chaharshanbe Suri, or Wednesday Light. As darkness fell a row of small bonfires were lit and people took turns jumping over each one to symbolize leaving behind the less desirable aspects of the past year and welcoming the new year with hope. We especially enjoyed the traditional music, sweets, and mingling after the fires were extinguished. A few days later we gathered with the church community for a special dinner and service to welcome the new year together. 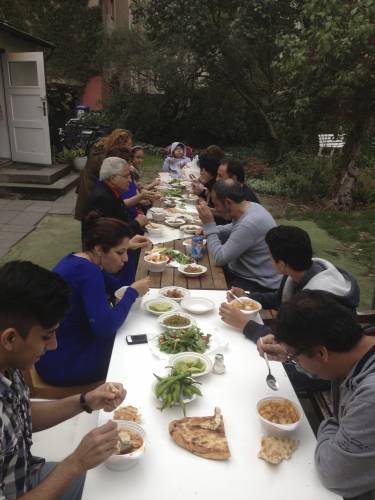 A community event of fellowship and traditional Iranian food Abgooshat.

A few weeks before Pentecost the German congregation and the Iranian congregation had a joint worship service. Ryan preached on the role of prayer and the service was conducted in English, German, and Farsi. Hymns and worship songs from both congregations were sung. It was good exposure for everyone despite the linguistic challenges. As we saw barriers break down, small conversations happen, greetings, and friendly interactions as people reached out to each other, we were inspired and thankful. We have much to learn from each other.

Immigration Challenges
This spring Alethia was able to go with Aziz, our Iranian colleague who serves as a social worker, to visit a couple of the immigration “camps,” or dormitories. There many asylum seekers and those otherwise waiting for their immigration status to be resolved by the German government spend their days and weeks and months waiting. Each family in the building has one small room with bunk beds and either a kitchenette or bathroom, but usually not both. A communal kitchen and bathroom are shared depending on the dorm setup. A dorm proctor is on duty at the front door to keep an eye on the building and those coming and going. These buildings seem generally safe and clean places to be, but the conditions are cramped and meager, which is especially difficult for larger families. It was a privilege to hear the stories shared by these families as they offered a glimpse into their lives and experiences of how they came to be here in Berlin. These families offered us their personal stories and the emotions and reflections that are embedded. We offered them our ears, minds and hearts and time to hear what they said and did not say. We couldn’t offer concrete hope that their situation will be successfully and quickly resolved, but we could offer tangible connection and care.
Immigration Assistance

Earlier in the year a man and his family had a stressful court hearing regarding his visa extension because he had been too fearful to use his true name on documents after leaving Iran. The German authorities were suspicious about his name changes, but after much support from Aziz and Sadegh, the social worker and pastor at the church, he was granted permission to stay, to the relief of his family. When he shared the news at church the following Sunday the atmosphere was celebratory.

We were also able to celebratewith a family whose son had been kicked out of school in Iran because the administration discovered he is a Christian. His family arrived in Berlin and it was difficult for him to find a school here as he is still learning German. Thankfully, he was accepted by a school, and the thrill he and his parents felt was apparent.

Conference for Refugees
In the fall we were able to help support Sadegh and Aziz as they led a conference in Greece for Iranian refugees living in Athens. In previous years this sort of conference has been held in Berlin, but this year the situation of the refugees in Athens came to our attention as it is quite desperate in comparison. Our church with the aid of outside supporters was able to reserve a lovely hotel to host the group from Athens, providing them with a break from their living conditions in the city. We spent three and a half days in worship sessions and teaching, sharing meals and stories together and offering immigration advice as many still have unresolved status in Greece or are separated from their families and hoping for reunification.

After the conference some refugees shared that they were so moved by the hospitality and generosity they received that they wanted to do the same for other refugees in Athens. When we left, the appreciation was evident in their faces and parting words. Please join us in praying that the message they heard will continue to take root and for the ongoing immigration process for many. 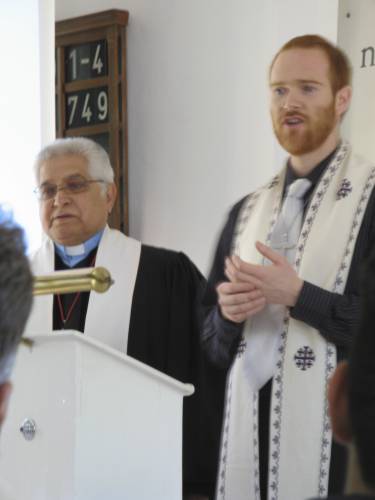 Relationship-Building Between Americans and Iranians
As tensions exist between the U.S. and Iran/Afghanistan we are thankful to be able to be part of a church where we as Americans can build relationships between our two communities. We have welcomed a few visitors from the U.S. over the past year and their experience of the Iranian church has brought new understanding on both sides. We hope that as we share the struggles of immigrants from Iran and Afghanistan as well as the overall challenges of immigration in Europe and the faith and trust of the refugees in the midst of complex challenges that we can help provide another picture of Iranian culture, one that is based on people and not simply government influence.

Vision for the Iranian Church
As we think of the future of the Iranian Presbyterian Church in Berlin, our hope is for this ministry to continue and thrive beyond personnel transitions. For this to occur we need a development of lay leadership who can be trained to lead the church. We pray for an understanding of the gifts each community member may contribute for the benefit of the church. We also desire connections with other organizations and churches working with refugees in Berlin so that we might offer one another mutual support and resources in our work together.

Thanks for Partnership
Sometimes it feels like our communication is sent out to the void of the worldwide web, but when we receive notes and prayers from you we are blessed to know of the worldwide support. Thank you for all that you do and contribute through your prayers, sharing our stories with others, and financial gifts, without which this ministry would not have meaning or be possible.