Congregations: Give toD507565for Ryan and Alethia White’s sending and support

Salaam, Grüße, Greetings from Berlin where spring is breathing small whispers of its promised coming. Having lived now through our first full set of seasons since before our eight years in Southern California, we can report that winter has been harder on us than we anticipated. Although we’ve now been in Berlin for over a year, the darkness and cold of the city in winter along with at least six straight weeks of illness in our family disrupting our daily routines have taken quite the physical, mental, and at times spiritual toll.

We are excited that we have made it through our first year of adjustment here and feel thankful to live in a neighborhood we enjoy and to have formed the very beginnings of a community here, both within the church and elsewhere. But we have also struggled more with our sense of place in regard to our work and how best we can take part. It has been hard to know what to say by way of description of our work in the past few months, but we have been able to participate more during the weekly social work sessions, which have been both good practice in listening to people’s stories in Farsi and also eye-opening as to their situation since leaving Iran and arriving in Berlin. The immigrant issue is a hot topic these days in Germany, with Berlin expecting an estimated 15,000 new refugees (not just from Iran) this coming year. This represents quite a rise in numbers from the previous years, so politicians and social and religious organizations are all trying to decide how to manage this trend. We have also had the opportunity to hear from many Afghan refugees in recent months, who have their own set of extremely challenging circumstances. 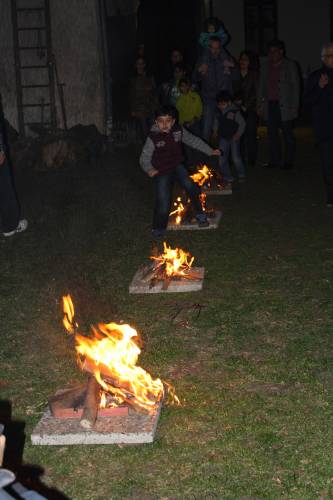 Spring also brings the Iranian new year celebration, Norooz, which signals the end of winter darkness and hope for light and new life in the new year. The Norooz celebration actually begins on the last Tuesday night before March 21, called Chaharshanbe Suri (Wednesday Light), when Iranians gather together to say goodbye to the previous year and look ahead to the upcoming year. One key element to this evening is the traditional jumping over small fires, taken from the Zoroastrian tradition. The red of the fire (suri) symbolizes the hope for good health in the new year. This year we enjoyed music, dancing, lots of chai (tea), dinner, and jumping over a set of bonfires together. A few days later, during the actual new year celebration, we again had dinner together as a church community. The evening was a time of worship, fellowship, and celebration of Iranian culture. Norooz mubarak (Happy New Year)!

Also, with spring we are happy to announce that our family is expecting another baby, who is due to arrive in mid-June! We are looking forward to welcoming our second daughter in a couple months, and Ariella is, for the moment, seemingly excited about the prospect of a little sister. So there are many promises of new life ahead as we leave the darkness of winter behind and enter the new year.

Later this year we are also anticipating returning to the U.S. during the fall months for itineration. We look forward to reconnecting with churches, partners, and friends during that time. At this time our schedule is still flexible, so please let us know if you would like us to visit your church or meet with you in another way. Because we have contacts on both sides of the country, we plan to spend this trip on the West Coast and the following trip (around 2017) on the East Coast. For now we plan to be based in Pasadena, Calif., starting mid-September until about the beginning of November. During the month of November we would like to come to Seattle, Wash., and then to Anchorage, Alaska. We plan to return to Berlin around the beginning of December. If you and/or your church is interested in hosting us in some way during our itineration we are excited for and welcome any opportunity we have to meet with you.

Thank you all for your continued prayers and support for our family and our work here with the Iranian Presbyterian Church in Berlin. Your support by way of prayer, notes, and financial giving make it possible for this work to continue. As the immigration issue continues to grow and gain attention here we are very aware of the important role the church in general has in supporting those seeking a new life here in Berlin and offering the hope of God’s Word in the midst of deep struggles. We thank you for your continued participation together with our partners here in offering a light to those who journey.

We hope that each of you is well and we join you in welcoming the brighter days of spring!