Congregations: Give toD507565for Ryan and Alethia White’s sending and support

As tens of thousands of people have sought refuge in Germany recently we want to share with you two stories of refugees we have met in our work with the Iranian Presbyterian Church in Berlin. Please join in prayer for all the people migrating across the world who each possess their own story.

Frieda sits in her small dormitory room, fearful of the future and filled with memories of the past. She has trouble sleeping and seems to be falling into a deeper state of depression and anxiety. Recently Frieda received notice that her asylum case in Germany was denied. Every knock at the door sends a jolt of fear through her because she wonders if it is the authorities coming to deport her. 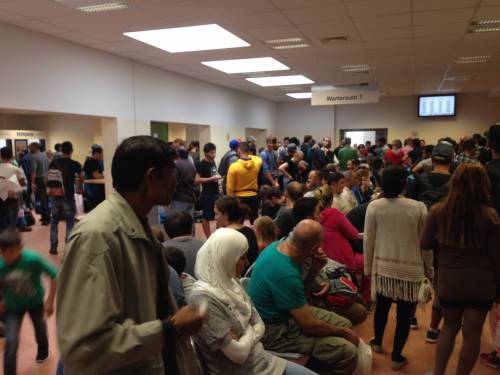 Waiting room within the refugee registration center in Berlin

Frieda fled from Iran to Germany, but went through Italy to get here. According to the Dublin accords, under normal circumstances one must apply for asylum in the first country where one lands within the European Union. Many refugees in Germany have come through Greece or Italy along the southern Mediterranean route. Because of this their asylum case within Germany is complicated and often they are told they need to return to the first country of entry or their home country.
Returning to Iran is not possible for Frieda. She and one of her daughters were arrested for attending a house church in Iran. Her daughter was engaged to a Christian man and despite destroying much of the evidence, one photo remained on her phone that was sufficient to sentence her daughter to 11 years imprisonment and 120 lashes. Her daughter has served 1 year of this sentence and received 40 lashes on two separate occasions.

Baraz has two young daughters. He convinced his wife that there was no hope for their daughters in Iran and that the only option was to try to begin a life somewhere else. He hired a man to secure visas for them to any European country and after paying thousands of dollars for each one, have received visas to Germany. 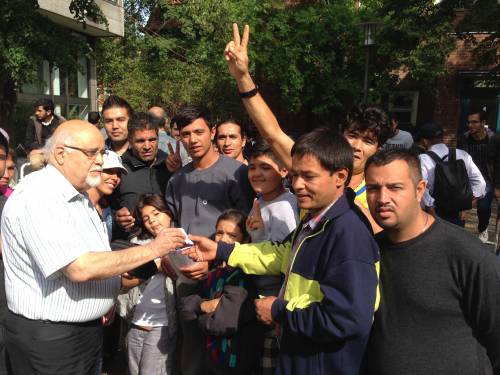 Aziz assisting Farsi speakers outside the registration center in Berlin.

Once they arrived they immediately went to the authorities to begin their asylum process. After hearing that he needed to make a case for asylum and that becoming a Christian made his case stronger for why he could not return to Iran, he sought out an Iranian church and found the Iranian Presbyterian Church in Berlin. He enrolled in the new members class to prepare for baptism. As he was reading the Bible the words of Jesus spoke to him, particularly Jesus’ words from the Sermon on the Mount, “Blessed are the poor in spirit, for theirs is the kingdom of heaven.” Baraz had an encounter with Jesus that continued to grow. Now Baraz helps lead worship services at the Iranian Presbyterian Church in Berlin.

Both Frieda and Baraz have benefited from the ministries of the Iranian Presbyterian Church in Berlin. Though Frieda attends another church, our social worker has provided services for her by helping with medical visits and finding legal help. Baraz has become one of the consistent members of the church and has been a help to us because he is conversant in English and has offered some basic translation. Over the past two years we have worked with him, organizing worship services, and recently he also translated two sermons for Ryan. It is our hope for the future that, like Baraz, more people can be trained and developed into leaders within the church.

Please continue to join us in prayer for people like Frieda and Baraz who have felt their only choice is to leave their home country and begin life again in a new, often very different, culture. Your financial support is appreciated and needed to continue work with Frieda, Baraz, and others in a similar situation and who are brought into contact with the church in Berlin. Please consider how you might support this ministry so that others may benefit.

Blessed are the poor in spirit…

We wish you our blessing from Berlin,
Ryan, Alethia, Ariella and Laila
The 2015 Presbyterian Mission Yearbook for Prayer & Study, p. 328