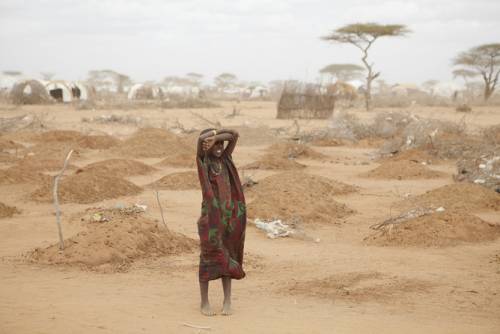 No doubt you’ve seen ads about the need to feed the world. The claim is made that by 2050 we’ll need to increase food production by 50%. These ads come from agribusiness corporations such as ADM, Cargill and Bayer-Monsanto, and then they are parroted by the media and academics, despite the fact that there is no scientific basis for the claim.

What if the urgent ‘feed a growing, hungry world’ is a  red herring?

These alarming claims are not only flawed, but dangerous, says Jonathan Latham, co-founder and Executive Director of the Bioscience Resource Project and the Editor of Independent Science News, along with many other researchers, including Serban Scrieciu, Michael Reilly and Dirk Willenbockel, Timothy Wise, Frances Moore Lappé and Joseph Collins.

In Latham’s article, “Agriculture’s Greatest Myth: There Isn’t an Impending Food Crisis” (April 2021), he provides four reasons why the claims are wrong. And if Latham is right, Bill Gates’s approach to agriculture is not only wrong, but damaging to farmers, the environment, and efforts to combat climate chaos. 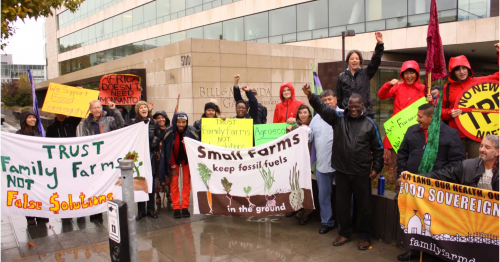 Protest in front of the Gates Foundation in Seattle by AGRA Watch, the Alliance for Food Sovereignty in Africa, family farmers, and allies from around the U.S.

For decades, and despite the opposition from many sides, Gates and his foundation have been pushing a chemical-intensive, industrial-style agriculture on Africa through the Alliance for a Green Revolution in Africa (AGRA).

“We urge the Gates Foundation to stop pushing a green ‘revolution’ that imposes technologies and seeds that are controlled by companies with vested interests. Rather, it should be looking at and learning from small-scale farmers from around the world who are working to build alternative food systems that are socially just and ecologically sustainable.” 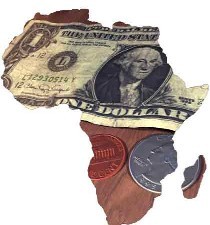 Yet, Gates and the agribusiness corporations participating in AGRA push forward with their genetically engineered seeds and chemical farming model, driven by profits and justified by the rationale of feeding a growing population.

Latham states that the rationale is wrong. He says that global food models both underestimate global food supply and overestimate demand, and so they predict a crisis when there isn’t one. In his new, peer-reviewed paper, The Myth of a Food Crisis, Latham critiques the United Nations’s GAPS model of estimating food supply and demand – and by extension, he refutes the validity of all similar food system models

1) That biofuels are driven by “demand”.

As the paper shows, biofuels are incorporated into GAPS on the demand side of equations. However, biofuels derive from lobbying efforts. They exist to solve the problem of agricultural oversupply. Since biofuels contribute little or nothing to sustainability, land used for them is available to feed populations if needed. This potential availability (e.g. 40 percent of US corn is used for corn ethanol) makes it plainly wrong for GAPS to treat biofuels as an unavoidable demand on production.

2) That current agricultural production systems are optimized for productivity.

As the paper also shows, agricultural systems are typically not optimized to maximize calories or nutrients. Usually, they optimize profits (or sometimes subsidies), with very different results. For this reason, practically all agricultural systems could produce many more nutrients per acre at no ecological cost if desired.

3) That crop “yield potentials” have been correctly estimated.

Using the example of rice, the paper shows that some farmers, even under sub-optimal conditions, achieve yields far in excess of those considered possible by GAPS. Thus the yield ceilings assumed by GAPS are far too low for rice and probably other crops too. Therefore GAPS grossly underestimates agricultural potential.

As the paper also shows, a significant proportion of annual global production ends up in storage where it degrades and is disposed of without ever being counted by GAPS. There is thus a very large accounting hole in GAPS.

Some of the above gets technical, but one important bottom-line conclusion is —

1)  The dominant, corporate-driven model of agriculture is based on overproduction, which produces low agricultural commodity prices to benefit agribusiness corporations, rather than an agroecological model designed to benefit farmers and eaters with affordable, healthy food. And the myth of ‘feeding a hungry world’ is fabricated to justify the dominant approach.

2)  There is no global shortage of food – not now nor in the foreseeable future.

Even with population growth and shifting diets, worldwide production can easily surpass increased demand. In fact, the current and future glut will continue and will likely cause commodity prices to decline.

One wild card is the way climate disruption may change the field of play. But promoting industrial agriculture as a way to mitigate or adapt to climate change, when industrialized food systems are the leading emitter of carbon dioxide, defies logic.

Instead, agroecology, which sequesters atmospheric carbon into the soil, needs to be promoted and scaled out to

Alarmism about future shortages, especially given enormous faults in the calculus, should never be used to rationalize agricultural expansion, especially when our overproductionist model of agriculture is spurring land grabs, driving ecosystem destruction and climate change, and destroying the livelihoods of smallholder farmers and the economies of poorer nations dependent on agriculture. False concern about feeding a hungry world is being used to justify AGRA-style agriculture, featuring heavy pesticide and fertilizer use and genetic engineering.

Bill Gates is dead wrong and the Alliance for a Green Revolution in Africa (AGRA) is a dangerous sham.

Learn more about AGRA from our partners at AGRA Watch.


One Response to “Bursting the Bubble on Food Alarmism: Why Bill Gates is Dead Wrong”