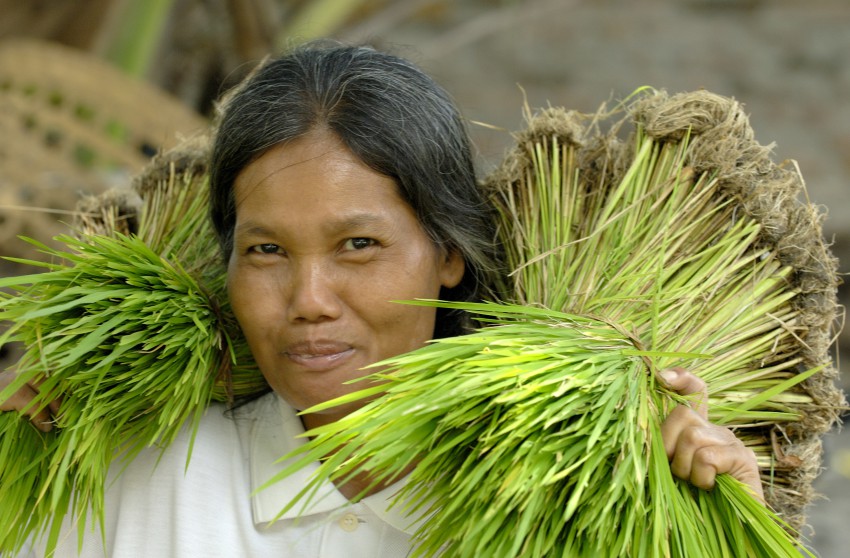 Since agriculture emerged 10,000 years ago, it has been smaller-scale producers who have fed the world. Industrial, high-tech and chemical-intensive farming has only been around for about 80 years, and still today it is small-scale farmers, ranchers, pastoralists and fishers who provide approximately 70% of all the food eaten on Earth[1].

Marketing professionals and lobbyists from Monsanto, ADM and companies promoting industrial agriculture and GMOs [we’ll call that Big Ag for shorthand] have spread a myth, which people of all stripes have swallowed. This myth claims that only large-scale industrial agriculture can feed a hungry world. The myth consists of two parts: (1) More food is the answer to feeding people; (2) Corporate, industrial agriculture is the approach that can fill this need.

First, the myth that more food will feed a hungry world.

The fact is we produce more than enough calories for every resident on the planet, and then some. Despite this, hunger is an everyday reality for 805 million people, more than 1 in 10 people. Clearly, hunger is caused by factors other than insufficient food. Hunger is caused, primarily, by poverty. In many cases, Big Ag-supported policies (for example, Free Trade Agreements) have caused greater impoverishment. The focus on industrial agriculture – bolstered by policies that encourage overproduction with corresponding low prices for producers and the elimination of a price floor –has resulted in bankruptcy for tens of millions of family farmers and poverty for farmworkers in the U.S. and small-scale producers around the world.

Second, the myth that Big Ag is the answer.

Since more food is not the answer to hunger, you can see that Big Ag bases their solution on a false assumption. So not only is increased food production not the answer to feeding a hungry world, Big Ag would not be the solution to increased production in any case! Why? Because diversified farms produce more food per acre than conventional single crop agriculture. Agroecological farming is also more productive in areas with marginal land and unpredictable weather, exactly where most impoverished people live. Plus it is less toxic, less polluting and more likely to sustain our species into the future.

Here are three reasons why Big Ag did not, is not and will not ‘feed the world’:

Failed Track Record of Industrial Agriculture: At first glance, the Green Revolution (irrigated, chemical-intensive, hybrid seed-based industrial farming) looked like a success. From 1970 to 1990, the total food available per person in the world rose by 11 percent, while the estimated number of hungry people fell from 942 million to 786 million – a 16 percent drop. Green revolution promoters took the credit. But if you look closer and eliminate China from the analysis, the number of hungry people in the rest of the world actually increased by more than 11 percent, from 536 to 597 million. In South America, for example, while per capita food supplies rose almost 8 percent, the number of hungry people also went up, by 19 percent. In South Asia there was 9 percent more food per person by 1990, but there were also 9 percent more hungry people. [2] Total food available per person actually increased, but it has been the failure to address unequal access to food and food-producing resources that causes hunger. The Green Revolution failed hungry people and new efforts to spread industrial agriculture are doomed to fail impoverished people, who are ironically often the farmers themselves.

Profit Versus Food – Big Ag (meaning conventional industrial agriculture and the global infrastructure, financial systems and supply chains of chemicals, commodity crops and food controlled primarily by global multinational companies) is not in the business of feeding people. Big Ag is first and foremost compelled by corporate rules to produce profit. Profits come first, which means that the needs of people, especially those not able to afford the cost, are neglected.

Jello or Spinach – Food security has focused primarily on providing sufficient calories. As an Indian woman PHP staff met in Andhra Pradesh put it, the result has been the creation of ‘starch security’ as opposed to nutritional security. One result, in the U.S., is that we have millions of food insecure and hungry people who are malnourished and overweight. In addition to the focus on carbohydrates, the soil of industrial agriculture is nutritionally deficient and therefore the food grown is also nutritionally lacking; not to mention the insecticides, fungicides and herbicides that we also ingest. Our diet-related health care costs – in the U.S. conservatively estimated at $100 billion a year [3] – demonstrate the depleted and harmful nature of conventional food.

In conclusion, as has been noted in the IAASTD Report and meta-studies over many years, small- and mid-sized diversified organic farming operations can produce more high quality food per acre than industrial methods. And they do so without destructive social and environmental effects. The methods used, grounded in the principles of agroecology, build a healthy ecosystem in partnership with nature and with greater community benefits.

People (especially lobbyists of the corporate food industry) often say it is too difficult to scale up such an approach, but that totally misses the point. These farming systems do not need to be super-sized, they simply need to be widely replicated. Agricultural promoters, using peer education and training models, such as ‘campesino a campesino’, and armed with appropriate research and sufficient support, can make this a reality with the support from all of us. Let’s stop debating the point and get to work to change our food system!

Tell your House Representative to say no to Fast Track!

[1] UNEP, 2011, Towards a Green Economy: Pathways to Sustainable Development and Poverty Eradication, www.unep.org/greeneconomy.
ETC Group. 2009. Who Will Feed Us? Questions for the Food and Climate Crises. www.etcgroup.org/upload/publication/pdf_file/ETC_Who_Will_Feed_Us.pdf.
Sarah K. Lowder, Jakob Skoet and Saumya Singh, “What do we really know about the number and distribution of farms and family farms in the world?” Background paper for The State of Food and Agriculture 2014. FAO April 2014. Figure quoted on page 8. http://tinyurl.com/qh6ql7l. See also: FAO, “Family farmers – feeding the world, caring for the earth”, 2014, http://tinyurl.com/osuelv8

[2] Eric Holt-Giménez, Eric. Ph.D., Altieri, Miguel A., Ph.D., and Rosset, Peter, Ph.D. (October 2006) Ten Reasons Why the Rockefeller and the Bill and Melinda Gates Foundations’ Alliance for Another Green Revolution Will Not Solve the Problems of Poverty and Hunger in Sub-Saharan Africa.

[3] The Center for Disease Control calculates obesity-related healthcare costs in the U.S. at $123 billion per year (CDC, 2010). The National Institute of Health pegs the figure at about $150 billion. (NIH, 2011)