Pride in her work 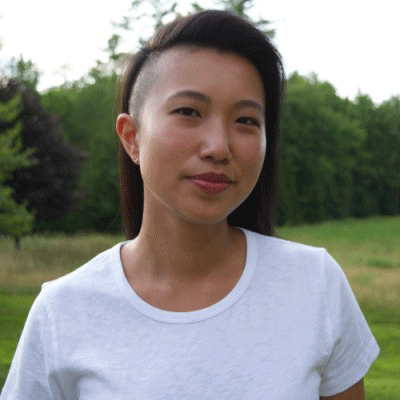 “Pride is in its essence this uncontrolled joy, a light and a reflection of how the Holy Spirit works,” Ophelia Hu Kinney recently told “A Matter of Faith” podcast hosts the Rev. Lee Catoe and Simon Doong. “I think of Pride as a way that light shines on things that didn’t have a light shone on them before and blows on things where the wind hasn’t gone before.”

Hu Kinney is communications director for the Reconciling Ministries Network, which walks alongside the United Methodist Church and other groups to work for the full and equitable inclusion of LGBTQ+ people in the church. She’s also the worship coordinator at HopeGateWay, a worshiping community in Portland, Maine. Listen to her conversation with Catoe, editor of Unbound: An Interactive Journal of Christian Social Justice, and Doong, mission specialist with the Presbyterian Peacemaking Program, by going here.

“I know there are some circles in church that think of Pride as one of the seven deadly sins, or perhaps the antithesis to being in right relationship with self, with God and with the church,” Hu Kinney said. “But I think of it as an antidote we’ve ingested as queer and trans people. Really, it’s an antidote that is freely offered to all people, not just LGBTQ folks, to the immense power of shame that church and other institutions can sometimes hoist upon us.”

If your church is the only queer- and trans-affirming church in your community, “it can be a huge risk to do something like put up a rainbow flag outside your church,” Hu Kinney said, telling Catoe, “I think the question you’re asking is in part, what is the most authentic way for us to be the faithful community that God is calling us to be?”

“If the answer to that is for right now, for the safety of our congregation and so that we can best do ministry, that means what we can do is be a quiet, safe space for queer and trans people, then that is beautiful and shouldn’t be overlooked,” Hu Kinney said. “At the same time, if it would be most authentic for you and your church community to be really loud and really proud and to make a yearlong commitment to things like being in partnership with queer- and trans-serving organizations in your community or hosting a queer prom or making sure you’re advocating for housing equality for LGBTQ folks, those are things that can be ongoing and long-term commitments that far surpass a performative allyship.”

“I think it really depends, from circumstance to circumstance,” Hu Kinney said. “But in the end, it comes back to, how can you be the most authentic to your stated values and to the way you see Jesus living out his ministry in his time?”

“I think that’s a perfectly nuanced way to describe the call that churches have,” Doong said, “while also acknowledging it can be hard but also we are called to do more.”

Hu Kinney also discussed the work of Reconciling Ministries Network, the largest and oldest organization working for LGBTQ+ justice in the United Methodist Church. “We’re not officially affiliated with the Church,” Hu Kinney said. “We are an organization that works alongside.”

The work includes “changing the hearts and minds of people,” she said, using a reconciling process that can take a few months or years. “It’s a lay-led process to try to change churches into places where queer and trans people can be their whole selves,” Hu Kinney explained.

Both denominations, she said, “have been subject to caucuses that have worked really hard for a long time to fight against inclusion.”

“There’s some grit that’s needed in this fight, because it is a fight,” she said. “I know there are folks in the church who don’t like to use that language … but there are uphill battles to be fought. There is a lot of work that can be done within our denominations for good and for change together.”

For bread that nourishes our bodies, we give you thanks, O God. For your Bread of Life to feed our souls, we pray. Strengthen us all for the tasks you have given us. Remind us that even what we believe to be a meager offering can satisfy the deepest hunger in others — and in our lives, too. Amen.