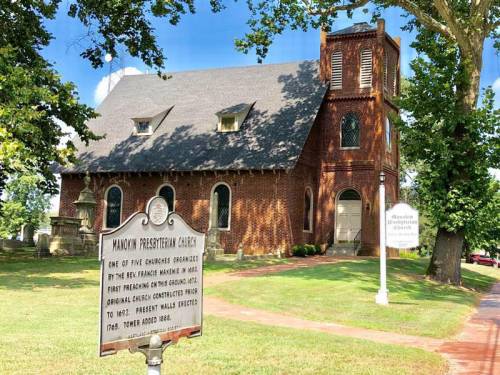 Manokin Presbyterian Church, first organized in 1672 in Princess Anne, Maryland, currently has about 30 members. But the church has a big heart for doing mission along Maryland’s Eastern Shore and beyond. (Contributed photo)

It was a week of mission at Manokin Presbyterian Church in Princess Anne, Maryland, along the state’s Eastern Shore. That’s because the 30-some members of this congregation, first organized in 1672, continue to stay in touch with each other, even though they have not gathered for worship since March 8 due to the COVID-19 pandemic.

In the church newsletter emailed to the congregation every Saturday, elder Charlotte Sharf announced on March 28 that she was sewing face masks and welcomed others to join her. Sharf was responding to a call from a small medical group who typically serve hundreds of patients in the Delmarva Region, many of whom are some 50 miles from the nearest hospital.

When elder Sam Slabaugh received news of Charlotte’s sewing project, he wrote her these words: “It caused me to ponder, ‘What can I do to contribute?’”

Then he read in the New York Daily News that New York Governor Andrew Cuomo had announced there was an acute shortage of ventilators in New York City hospitals, and that the need for them was likely to outpace the supply on hand within six days.

Slabaugh “made a few calls,” including one to his friend Marty Miller, who has a machine shop in Bridgeville, in Sussex Country, Delaware. It turns out that Miller was already at work making stainless steel ventilator frames to help with the shortage. But he needed someone like Slabaugh who could drive a big semi-trailer rig to New York City so all the frames could be efficiently delivered in one shipment. Those frames would then be assembled in Brooklyn and fitted with the necessary electronics.

Slabaugh said, “Apparently they cannot get truck drivers if they are taking this old man. It’s been probably 25 years since I have driven a semi — but I still have a CDL (commercial driver’s license).”

Thinking about the journey, Slabaugh said, “Big rigs are all fancy now — shift gears with the gas pedal, no clutch to push, like an automatic transmission. My biggest concern: getting to the proper place, no wrong turns, no accidents; and getting home safely.” And, writing to Sharf, he added, “I want you to know that I was inspired by your call to sew masks.”

The trip from Bridgeville to Brooklyn had to follow a strict bio-security protocol, Slabaugh explained. “When I arrive at the designated spot, I cannot roll the window down. They cut the ratchet straps and throw them away, unload with a forklift, and I head back south to disinfect.”

As for the driving, he knew from experience it would take complete concentration.

“Driving a big rig requires 100% focus,” Slabaugh said. “I cannot afford to have my attention diverted from driving for one millisecond; there is absolutely no room for error.”

Afterward Slabaugh said, “The hairy part was I had to pull across the 27th Street intersection in order to back into Davis Court to get to Boyce Technologies. I was told, ‘You either have to back in or back out,’ because Davis Court is too tight to make the turn with a 50-foot trailer.”

“The New Yorkers were patient,” Slabaugh said. “Nobody blew their horn as I slowly and carefully backed through the intersection under the stop light with traffic blocked all four ways. I felt like I was threading the eye of a needle.”

He felt something else, too. He explained: “When my mom was living, I would tell her about my projects and problems and she always prayed for me. Maybe it’s my imagination, but I felt like there were angels watching over me. There were so many things that could have gone wrong but didn’t. It went perfectly, miraculously — magically? I was just a cog on a wheel, in a gear, in a process that transmitted 15 tons of perfectly polished stainless-steel pieces to assemble approximately 300 ventilators.”

While Manokin Presbyterian Church is a small congregation in a rural county with many challenges, its missional outlook finds it consistently playing a larger role in its community than its numbers might suggest. Now that role has extended further into the Delmarva Region of Maryland, Delaware and Virginia and even beyond — to Brooklyn.

Sherri Hunter, Office of the General Assembly
Demetria Hurnton, Board of Pensions