Young Adult Volunteers rising to lead in a time of crisis

YAVs prove able to shift, adapt and learn on the fly 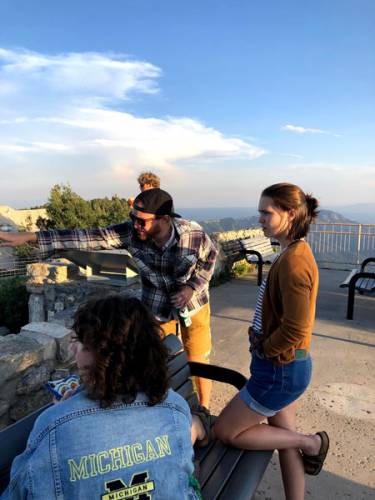 While Luke Rembold isn’t grateful for the circumstances of the current COVID-19 crisis and the pain and fear it is causing, he is grateful for the way he sees his Young Adult Volunteers (YAVs) responding.

Rembold is site coordinator for the Albuquerque YAV site and youth and young adult ministry coordinator for the Presbytery of Santa Fe. A former YAV himself, he is currently walking alongside four YAVs and is finding strength, resilience and opportunities for them to take leadership roles they might not otherwise have.

“I think this crisis is a rich learning opportunity for YAVs,” he said. “As someone who has worked with young adults for most of a decade, I’m constantly advocating that we carve out more space for our young people to lead us and I think this is a time for that to happen.”

Rembold says that in some congregations, young adults have been able to use their knowledge of technology to help their congregations think digitally and help with new ways of worshiping, including livestreaming.

“It’s a fairly seamless transition for young folks to go to a virtual and digital world, something we’ve given them a bad rap for a long time because they are always on their phones,” he said. “Now it’s reality for everyone and we’re realizing: Hey, they really know what they’re doing. Suddenly, we see that knowledge as valuable. It always has been but it’s such a shift in the way that we have traditionally done things that we couldn’t quite see before.”

Two of the Albuquerque YAVs are currently working remotely from the home the YAVs share together. Another was working largely in an office providing important data about the homeless population. Their entire administration building has been shut down, so he has shifted to working in the field.

“It’s been fascinating to watch him and see how excited he is about what he is doing. Rather than responding with fear or wishing he was able to do his old job, he’s been thrilled to learn something new and engage with people in a new way. He has shifted from a more digital platform to a more people-based platform. He’s learned a lot about safety and hygiene protocols as well. He has been able to let go of what he was doing and move into a new reality. It’s inspiring to watch,” he said.

Rembold says he believes that many of the core tenets of the YAV program have helped the YAVs make a smooth transition because they have been enacting practices like intentional community all along. They must learn to work out problems together, such as who gets to set up their home workspace in the dining room and who must work in their bedroom.

“It takes a lot of hard conversations and very direct communications and that is only amplified when those are the people you are spending that much more time with now,” he said. “Watching them work through that as a community, how to meet their own needs and work to accommodate one another in stressful times, requires them to offer a lot of grace and understanding at a time when they may not feel they are at their best.”

Rembold, a former Tucson YAV, is a cradle Presbyterian raised in the Pacific Northwest. Family members for generations have been Presbyterian pastors.

“Ministry is something that is in the family, but my parents are educators, and I continue to learn from them,” he said. “In terms of my own vocational discernment, I’ve found an intersection of ministry and education. My folks remind me, you can have the same curriculum every year, but it’s always going to look different. The question is how we shift and adapt and learn on the fly.”

Loving God, thank you for leading your children in new directions. Unstop our ears so that we hear your call to ministry wherever it is. In the name of the Good Shepherd. Amen.