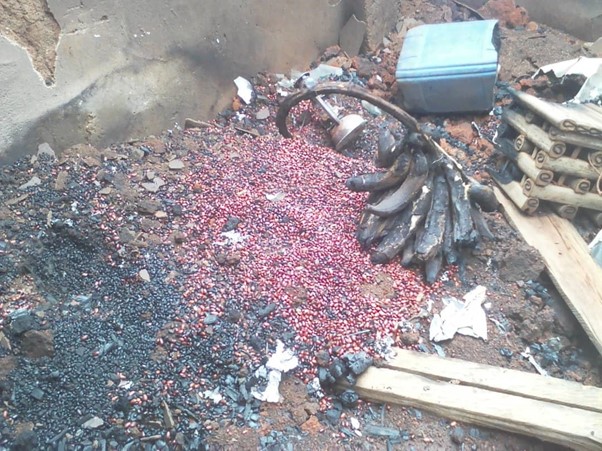 House and family food burnt down in Kumbo during a military invasion. Photo courtesy of RELUFA.

Cameroon was long considered a haven of peace in the conflict-ridden region of Central Africa. But today, 6 out of the 10 regions in the country are affected by insecurity or conflict.

In the Far North Sahel Region, Boko Haram, an Islamic Sect claiming to be people committed to the propagation of the prophet’s teachings and jihad, has been attacking villages since 2012.  Inter-community conflicts have been occurring regularly between Kotoko, Mousgoum, and Arab Choas communities in this region leading to the loss of lives and destruction of property.

In the English speaking North West and South West Regions, an armed conflict between separatists and government forces has been ongoing since 2017. And in the East Region, there have been attacks from rebels operating in neighboring Central African Republic.

All these conflicts have resulted in thousands of deaths, destruction of property, general insecurity and displacement of the population. This situation has rendered the field work of civil society organizations including RELUFA, the Joining Hands network in Cameroon, particularly risky and difficult.

Insecurity and Community Cereal Banks in the Far North Region

RELUFA has been working in many villages in the Far North Region of Cameroon since 2006, where together with local communities, community cereal banks were created to handle local food needs during the lean period. The current security crisis has limited the deployment of staff in the field, especially iin villages that border Nigeria. Regular Boko Haram attacks from Northern Nigeria on neighboring villages in Cameroon have pushed the population to abandon their villages. Currently, the local population and our field staff are risking kidnapping or even assassination. People are kidnapped for ransom and the youths are abducted and radicalized to join the fighters in the propagation of their ideology. The military is empowered to arrest, detain, or execute anyone suspected of being a member of Boko Haram. No one is guaranteed safety and security. 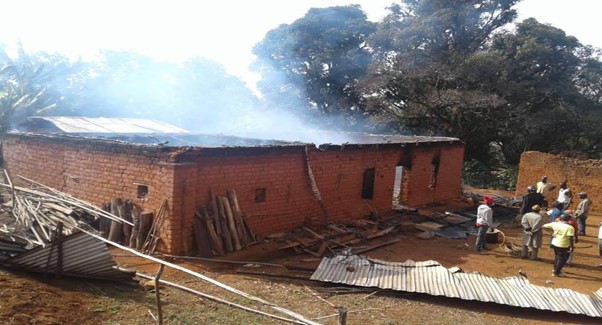 House burnt down in Kumbo, Bui Division of the North West Region. Photo courtesy of RELUFA.

In 2017, an armed conflict emerged between the Cameroon military and Separatists from the English speaking North West and South West Regions. The civilian population is bearing the consequences with 700,000 internally displaced persons, 59,000 refugees living in Nigeria, thousands killed, and 250 villages razed. Separatist groups have imposed lockdowns in the two Anglophone regions every Monday, where no one is able to leave home or conduct business of any sort. The separatists also reserve the right to declare a lockdown any other day or period as they deem necessary. The psychological trauma experienced by the population and our staff travelling to these zones, with such a high level of insecurity, is contributing to fear, stress, depression, and anxiety.

RELUFA has been prioritizing the safety of field staff while continuing to work to respond to the hunger and poverty challenges faced by the affected population. To keep our staff safe, we do not permit them to travel to high-risk localities, nor do we allow them to stay overnight in impacted villages. And advocacy work to influence power structures has weakened as power structures are suspicious of all dissenting voices and using arbitrary arrests as a tool for dissuasion.  The country’s attention has shifted away from development policies to managing the war.

The conflict in Cameroon is generating more hunger and poverty as most of the farmers have abandoned their farms and moved to more secure zones. It is challenging for civil society organizations to work in this difficult security environment due to the risks associated. RELUFA has however been contributing to improve the conditions of internally displaced persons by training young people in income-generating activities while also advocating for an end to the conflicts.