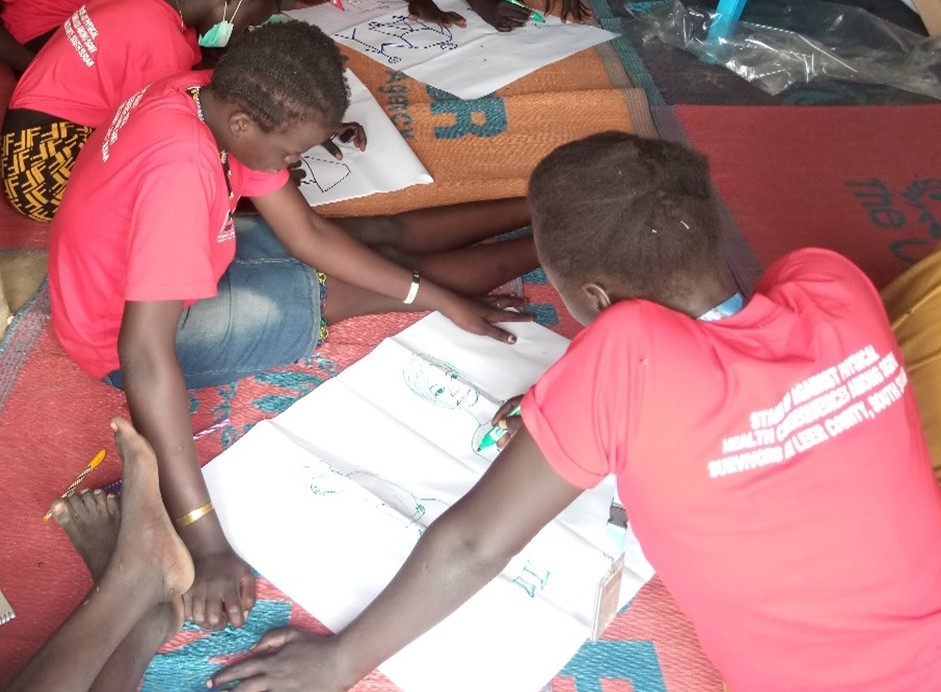 On June 19, we observe the International Day for the Elimination of Sexual Violence in Conflict.

According to a report by the United Nations Secretary General issued on  March 30, 2021, 193 cases of conflict-related sexual violence affecting 142 women, 46 girls and 5 men were documented in 2020 in South Sudan. Survivors of rape were as young as 3 and as old as 70. The majority of cases were perpetrated by armed groups including military, police, militias, civil defense groups, and other armed groups in the Greater Equatoria Region, Greater Upper Nile, Greater Bahr el-Ghazal and Unity State.

The Presbyterian Hunger Program has been supporting efforts of Hope Restoration South Sudan (HRSS) since 2018 to improve the food security and livelihoods of women and girls and prevent gender-based violence in Mayendit County in Unity State.

HRSS, with funding from the United Nations Population Fund (UNFPA), is currently implementing a Sexual and Gender-Based Violence (SGBV) project in Bentiu, Unity State, where the majority of SGBV cases are related to conflicts.

Most of these crimes go unpunished, but in 2020, 26 members of defense forces and police were convicted of conflict-related sexual violence, including the rape and gang rape of minors, primarily women and girls.

Conflicts in South Sudan rely on violence against women and girls where victims are targeted based on their ethnic background or their political affiliation. Though the Government has been at the forefront of trying to prevent such incidences from occurring, there have been gaps in coordination among the different authorities. The Ministries of Gender, Child and Social Welfare, Justice and Interior and other actors need to collaborate to ensure that those who perpetuate these crimes are brought to justice to discourage future attacks.

Cases of sexually transmitted infections, unwanted pregnancies, physical body injuries, family breakdown, and childhood marriages have been reported as a result of conflict related violence. Unfortunately, medical facilities where survivors can get help are either too far away or poorly equipped to handle SGBV cases. And the Covid-19 pandemic has complicated things, many survivors are too scared to seek medical care for fear of contracting the virus. Further, survivors fear the stigma associated with SGBV.

Hope Restoration South Sudan (HRSS), with support from partners, is working to bridge the gaps in social support systems through community-based trainings. HRSS, with funding from the UN Refugee Agency (UNHCR), is constructing a one-stop-Centre in Bentiu to enhance management of conflict related sexual violence as well as gender-based violence which will go a long way in bridging the gap that exists in management of such cases. The one-stop- Centre has social workers, medical personnel and a legal officer who will ensure survivors’ emotional, medical, and legal needs are addressed.

In conclusion, HRSS welcomes the recent announcement by the South Sudan government that it will expedite the establishment of transitional justice mechanisms so that all perpetrators of sexual violence are prosecuted.