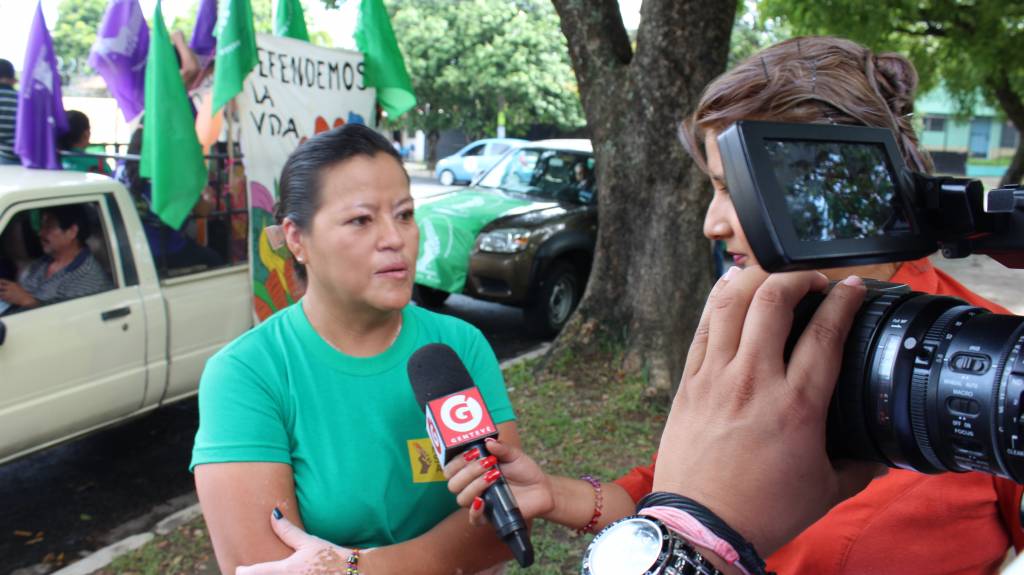 Doris speaks to the media. Photo courtesy of ARUMES.In September of 2011, I decided to quit my job and gave myself some time to look for a new one. I had one very good offer and I was in the midst of that process when I heard that the El Salvador Joining Hands Network was looking for someone to coordinate the work.

I arrived to the interview with Joining Hands and as I learned more about their program, I was faced with a difficult internal struggle between my head and my heart, because I knew from the first moment that I was looking for something like this position but I would not earn as much as the other job I was being offered. I prayed, took a leap of faith, and accepted the Joining Hands position.

I started working part time for Joining Hands without an office or a vehicle and with a low salary and long work hours. I thought it would only be for a few months, but I have now been here 8 years.

Before starting the job, I had 31 years of experience working in communities and education in teaching and local development, but not much experience in advocacy. With the desire to learn, I decided to take on the challenge and the work of Joining Hands for justice and peace in El Salvador. 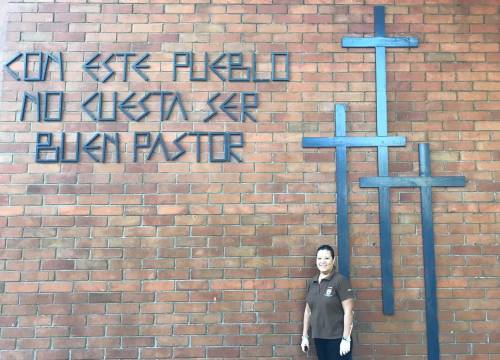 Doris stands outside a church wall where the words are written “With these people its not difficult to be a good pastor.” Photo credit Valery Nodem.

I decided to do this because Jesus calls us to advocate for the poor, to not forget the widow and the orphan, to visit the sick, to give bread to the hungry and to clothe the naked. These are Biblical verses that we know, but we don’t act on. They are verses that have crossed my mind since I was a girl because when I was 4 years old, my father died from pneumonia. If only we had had the money to pay for his medicine, he wouldn’t have died. I am the seventh of eight siblings and my older sister and brother had to start working at 16 and 14 years old and my mother worked as domestic help in private homes.

We have gone to church since I can remember. I saw my widowed mother and siblings work so that we wouldn’t lack food on the table. We were poor and orphaned, and I never saw the church visit to help us. In the midst of all this, God never abandoned us. My grandmother and mother, two women of prayer, taught us the active power of faith that kept us alive. We never lacked for shelter, food or clothing. We were a happy family with all the limitations of being a poor family, but we managed to get by.

Joining Hands does not do projects for housing or bridges or roads; we don’t have a picture to show where you can see what we do, as we build ideas with people from the communities. We train people nationwide so they can raise their voices and demand their rights. We work to raise awareness on the use of pesticides and how they affect us in all aspects of life.

ARUMES, the El Salvador Joining Hands network, is an organization that is different from others. Focusing on an agriculture free from pesticides as our campaign is a great challenge; advocating on behalf of the disadvantaged, being their voice and guide. This focus on influencing public policies and developing legislative proposals that favor the most vulnerable populations across the country has not been easy, but we have done it.

The struggle against pesticides is an issue of economic power on a global scale. Corporations make excessive profits from the sales of pesticides while patients suffering with kidney problems due to exposure to toxic pesticides don’t have access to the medicines they need. 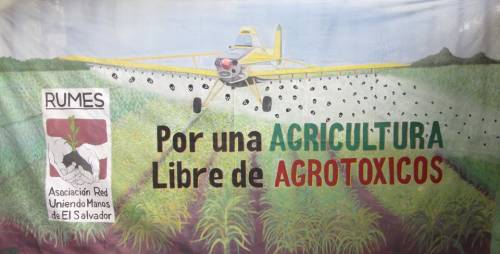 An ARUMES banner which reads “For an Agriculture free from Agrotoxins.”

We come alongside communities whose rights to a healthy life have been violated, who suffer from illnesses caused by the pesticides that crop dusters spray on sugar cane plantations. They are poor forgotten communities where many die slowly because they do not have access to adequate treatments. As Joining Hands, we visit the widows and orphans and pray for them. We don’t give food, but we support them with technical assistance to enable poor families to grow their own healthy food.

There is much more to do and I am conscious that the challenges are great. The campaigns of political parties are financed by the same businesses who own sugar cane plantations and other companies that exploit water resources. Environmentalists are persecuted in Guatemala, Honduras and other countries, and we are at risk of persecution here as we fight against giants, but we will continue walking with the disadvantaged and trusting that justice will prevail.

Despite all the challenges, many more communities are filing official complaints and demanding solutions to the problems they face. They have joined us and support the work of Joining Hands; there is more awareness and sensitivity to the issue among the people directly affected so they participate actively in advocacy activities and other organizations have joined forces to unite with us in the joint struggle. We see now many fruits of our efforts and we see the affected communities being the protagonists of these changes that they had previously considered not possible, but now with Joining Hands they have been trained up for action and they are active and keeping their problems on the radar of the media.

Living through El Salvador’s 12-year war gave me an understanding of injustice and insecurity. Working with Joining Hands, PCUSA, has changed my perspective on justice and peace. I have had moments where I have cried and felt devoid of strength, but I have never stopped having faith or believing that what we have accomplished in these 8 years has made a marked difference in this country.

I recognize now that peace and justice are not brought about with the sound of a machine gun but are attained through conscious and constant struggling, walking with, accompanying and raising your voice for the poorest and most disadvantaged.