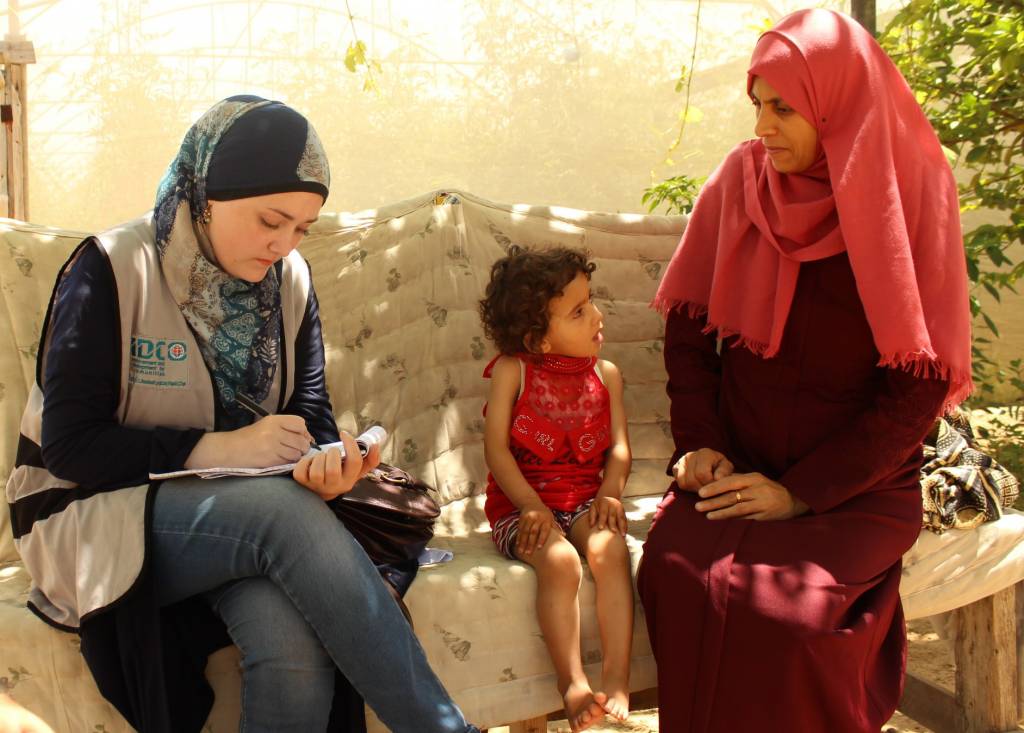 Merfat and her daughter consult with a member of IDCO’s staff. Photo courtesy of IDCO.

The Gaza Strip is a  self-governing Palestinian territory bordered by Egypt and Israel along the Mediterranean sea. There are more than 1.8 million people living there on land that measures just under than 150 sq. mi.

Since 2007, Israel and Egypt have maintained some form of a land, air and sea blockade on Gaza, controlling the flow of resources and people to and from the zone. There has been continued violent conflict between Israel and Hamas, the Islamic Resistance Movement which came to power in the Gaza Strip in 2006.

More than half of the households in Gaza are food insecure (44%) or vulnerable to food insecurity (16%). Gaza lacks basic infrastructure like proper clean drinking water and sanitation systems. Thirty-five percent of Gaza’s agricultural land is located in high risk restricted zones and therefore is off limits for cultivation.

The Presbyterian Hunger Program (PHP) has been partnering with the Gaza grassroots organization Improvement and Development for Communities Center (IDCO) since 2014. IDCO is doing really important work in the Gaza Strip to improve food security. 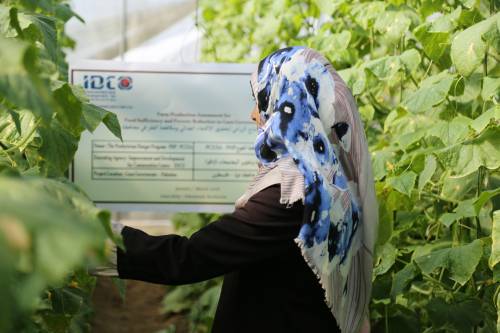 A woman farmer tends to her crops in Gaza. Photo courtesy of IDCO.

Merfat, a mother in one of the participating families, shared that the family’s sole source of income was their land, and that they relied on selling  crops in the market each harvest season.  Though struggling, they made ends meet until a tragedy struck their household.  Their youngest daughter had a congenital heart flaw and required surgery to survive.  The family used everything they had to rescue their daughter, and they were joyful following a successful operation.

Then they faced the reality of bankruptcy.  Previously they had grown cucumbers, but the land was dry and uncultivated, they didn’t have enough fertilizers to refresh the land, and the family had no money to purchase materials.

IDCO, through a grant from PHP, installed an irrigation network on a section of their land.  Merfat shared, “We always had to make a choice of what to grow, not being able to benefit from the remaining part of our farmland.  Now we can grow whatever we want, most importantly, wherever we want.”

Merfat is thankful.  With the vegetable seedlings that were also provided, production on the family’s land has increased.  Now instead of 2 tons, they can sell 3 tons of vegetables from each quarter acre.  This means the family has greater financial security, allowing them to raise their children and provide medication for their daughter.

PHP continues to support the work of IDCO in Palestine.  Provision of seedlings, distribution of organic manures, creation of working days for agricultural workers, and sensitization on environmentally sound agriculture and water saving techniques were among their goals for 2019.  In 2020, plans include the renovation of damaged greenhouses and provision of inputs such as manure, irrigation networks, farming tools, and plants.

Give to the One Great Hour of Sharing to support PHP’s extreme hunger work in conflict zones like the Gaza Strip.

Demand an End to the Humanitarian Crisis in Gaza. Just six weeks into 2020, the humanitarian crisis has reached a tipping point as military interventions, limited movement, financial instability, and deteriorating infrastructure have left Gazans with little hope for a peaceful and secure future. The depletion of Gaza’s only local source of potable water has made drinking water a serious health threat, with the World Health Organization declaring 97% of Gaza’s aquifer unfit for human consumption. Unemployment has skyrocketed in recent years to 47% of the population, and over 69% among Gazan youth..

Israel has built and expanded settlements in the West Bank and East Jerusalem since its occupation of those territories began in June 1967.  Today, it is estimated that there are more than 800,000 settlers living in over 230 settlements in those places.  International law has consistently held that they are illegal, and this was reaffirmed in the 2016 UN Security Council Resolution 2334, which the US did not oppose.

On November 18, 2020, Secretary of State Mike Pompeo announced that the current Administration would reverse decades-long US policy holding that Israeli settlements are inconsistent with international law.