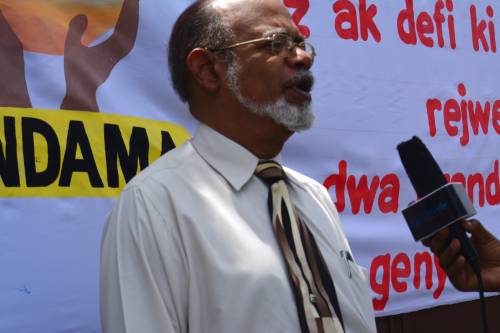 Ernst Abraham, the President of FONDAMA, speaks with reporters. Photo by Cindy Corell.

The 10-year anniversary of FONDAMA, the Joining Hands network in Haiti, has come at a difficult time for the country.  All citizens are protesting.

As the population took to the streets, the politicians went into hiding. The politicians continue to spend public money without paying attention to the needs of citizens. The history of Haiti is full of stories of political corruption.

As the population calls for an end to the misery through public demonstrations, more misery arises. Now in our 10th year, we members of FONDAMA are reliving the pain of the past 33 years as people loot, burn public buildings, burn schools, attack ambulances, and create other forms of destruction.  We are constantly having to restart something, systematically believing that a helping hand is beyond our reach.

FONDAMA’s General Assembly cannot be held, nor can it be rescheduled, due to the dangerous conditions. This is very unfortunate because FONDAMA’s work in Haiti is so important right now.

FONDAMA was created to combat the unjust economic and political system in Haiti. It’s a system that steals resources from citizens and places them under the control of multinational companies.

FONDAMA trains, informs and raises awareness among members and farmers in all 10 Departments of Haiti about the global political, social and economic environment of these large multinational companies. Nationally, we focus on raising awareness of the dangers of food imports on health, the economy and safety.

Reliance on food imports breaks down our domestic production and creates a cycle that make us dependent on imported food. These foods we buy from abroad are often made from chemicals that make us sick, and we have no cure for the diseases they cause.  We are therefore obliged to buy medicines from other countries.  So, foreign companies make money off us twice, selling us the cause of the illness and the cure.

In addition to a reliance on food imports, Haiti is also dedicating more and more land to industrial agriculture – plantations – for the export of food. FONDAMA is working to slow down the momentum of the private sector land investors looking to buy peasant land for little money to make a large profit.

We are fighting policies which encourage reliance on food imports and push peasants off the land to export food, because these policies will keep everyone in Haiti hungry.

The fight in which FONDAMA has engaged is not small.  The members did not initially understand the length and breadth of the issues we were going to tackle. And it is only by fighting tooth and nail, battling with goodwill and with few resources that we achieved everything we have.

As we reach our 10-year milestone, we might say that we have done half of what we thought we would, because of all the problems we have faced from earthquakes to floods to political instability.

But FONDAMA has no mission to defend only itself. Rather, we assist and accompany members and peasants in embattled areas to defend themselves.

The battle for life is a never-ending battle.  Thus, the work of FONDAMA has just begun.

We will never reach the middle of the road, because as we move, the road will always get longer in front of us.

May the length and breadth of the work not discourage us.

Let’s rise to the challenge with courage.