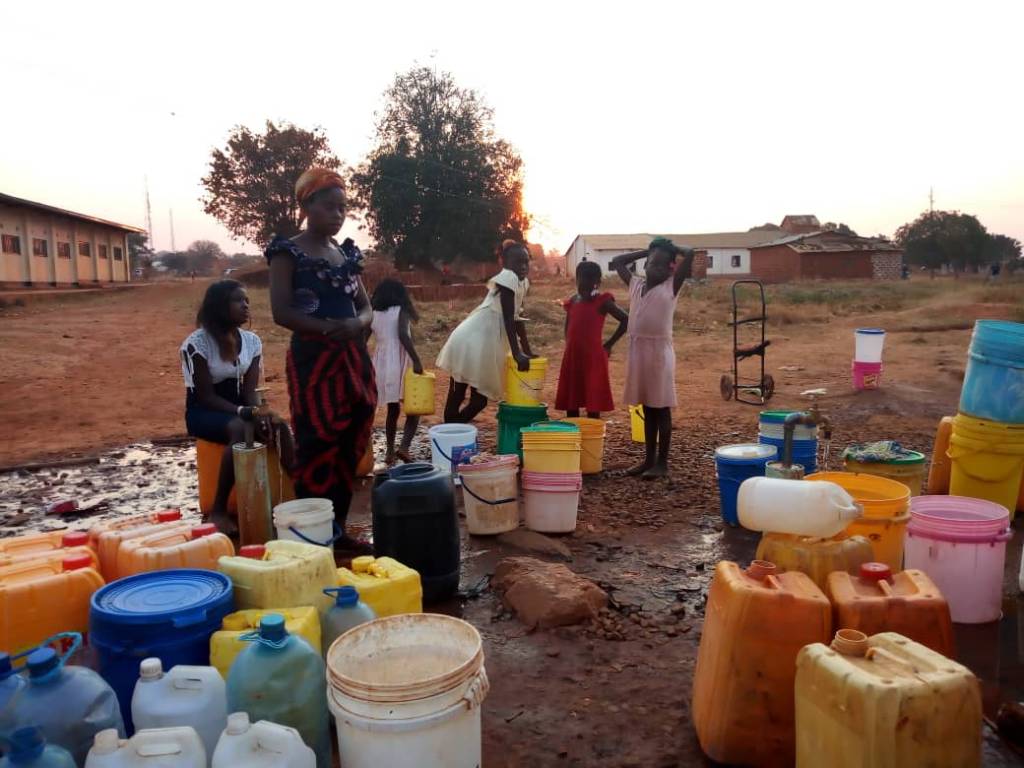 Women fill their jugs with water at the Methodist Church in Sakania. Photo by Beatrice Lusamba.

In the Democratic Republic of Congo (DRC), it has been common for local communities to bear the brunt of the negative impacts of the mining industry while enjoying very few benefits in terms of investment in improved infrastructure and development. In other words, mining companies have generated much wealth for themselves while mining communities have remained poor or even grown poorer.

This has very much been the case for the local communities in Sakania Territory, located in southeastern DRC on the border with Zambia. The capital of this Territory is the mining city of Sakania, in the Haut-Katanga province, which has a population of around 50,000 inhabitants.

The subsoil of the city of Sakania is rich in mineral deposits containing copper, zinc and cobalt. Since 2013, Frontier SA, a multinational mining company, has been mining these minerals in Sakania.

Despite the presence of wealth within the soil, the populations of Sakania are very poor, and have not benefited from the industrial exploitation of their natural resources – this is known as the resource curse. The poverty in Sakania can be seen in its lack of drinking water access, lack of quality schools, and lack of health infrastructure.

Lack of drinking water has really been a major problem in Sakania. The Lubembe River has dried up due to the overuse of water by the Frontier SA’s mining operations in the zone. Sakania communities depend on the Lubembe River for water for domestic needs like bathing, doing laundry and gardening. Additionally, the communities have struggled to access potable water with far too few wells in the city and many of the faucets experience insufficient water flow.

In July 2019, a brand-new water system that will supply the entire city of Sakania with clean drinking water was inaugurated by the Governor of the Haut-Katanga Province. The drinking water system was paid for with revenues received from the mining industry.

POM is currently working to strengthen the capacities of local community members impacted by mining projects, like those in Sakania, to elaborate, negotiate, sign and implement contractual obligations with mining corporations, as well as monitor social development funds and mining royalties.

POM worked with Sakania communities to advocate for the improvement of their living conditions. POM published study reports and filmed a documentary entitled “Sakania or drying up of the Lubembe River”. POM also organized workshops for the concerned communities, authorities and business leaders in Sakania and in Kinshasa the capital. The media picked up the advocacy messages from the reports and the documentary and helped put pressure on authorities of the province and country to take action to protect the rights of the communities of Sakania.

Now that a new mining code is in place that governs the mining sector in the favor of the development of the local communities, more communities like those of Sakania should, with the right training, be able to hold the mining industry accountable for respecting their rights and improve their living situations.