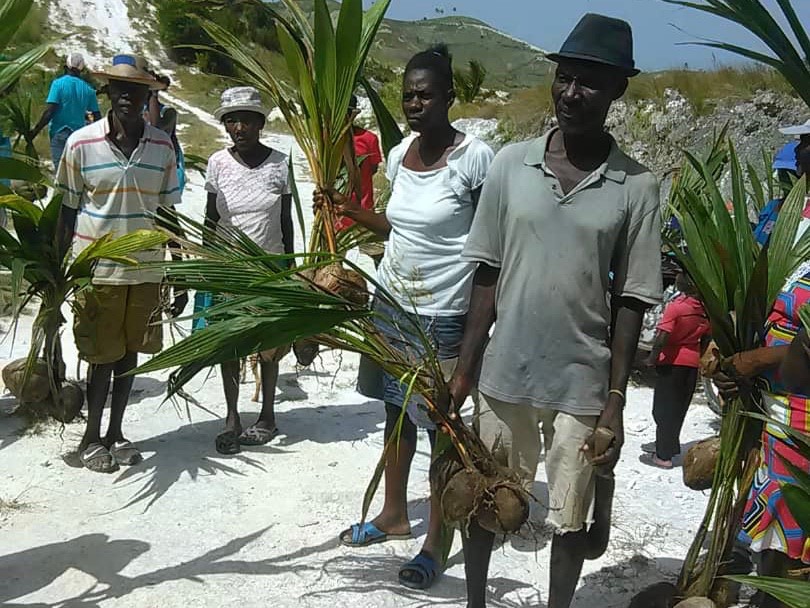 FONDAMA distributes coconut trees to peasants of “les cayes” with support from the Presbyterian Disaster Assistance..

For more than 20 years, the people of Haiti have faced dire hunger. Population growth, dependence on imports for essential foods, changes in eating habits, and the misallocation of wealth have, among other things, had a considerable impact on Haiti’s food needs and demands.

In fact, after the earthquake of January 12, 2010, the country’s widespread poverty increased, resulting in low resilience to external shocks which continue to intensify.

From Hurricane Thomas at the end of 2010 to Hurricane Matthew in October 2016, the country has faced numerous natural crises that have severely impacted people’s lives and jeopardized their socioeconomic recovery.

Today, Haiti is facing a situation that does not bode well for the Haitian people. Recent years have been marked by the deterioration of the economy, severely impacting the purchasing power of Haitian households, especially the poorest.

However, with the adoption of trade liberalization policies in the 1980s and 1990s, Haitian production had to compete with international products which lead to an increase in the importation of goods. As a result, imports have contributed to a decline in agricultural incomes.

When you have shrinking incomes, growing populations, pressure on resources, and now the latest political unrest, people who were already vulnerable are even more so now.

According to the latest UN report on Haiti, about 2.6 million people were affected by food insecurity between March and June 2019. The cost of food for a household increased by 11 percent. In the past year, food costs are 26 percent higher!

According to the Famine Early Warning System and the Haitian Institute of Statistics and Informatics, the prices of food products such as plantains, cassava, breadfruit, yam etc. have increased 41 percent. In addition, the devaluation of the Haitian gourd has led to inflationary pressure on the prices of staple foods such as rice, cooking oil, etc, most of which is imported.

With nearly 5.4 million people undernourished, Haiti ranks first among food-insecure countries in the Latin America and Caribbean region, ahead of Venezuela and Bolivia, according to the FAO’s latest report from July 2019. The FAO also states that more than one in four Haitians need urgent humanitarian aid.

Since the rise of President Jovenel Moise to power in February 2017, he has failed to propose any solutions to what are very serious problems in the country. And opposition parties, for their part, have been repeatedly ineffective by refusing to come together to remedy the crisis.

Economic and political insecurity has plagued this country for too long, and it’s the poorest of us who are paying the price.

Although the fierce political riots seem to have calmed, the economic situation is getting worse day by day for the Haitian people.

FONDAMA, the Joining Hands network in Haiti, is working to build a common force among the people. Our network continues to empower peasant farmers to be agents of the change and sustainable development to which they aspire.

FONDAMA, is working together with peasant organizations, to bring attention to the real problems faced daily by peasants, including land-grabbing, deforestation, crop failure, food insecurity and environmental crises.

The network has produced radio programs that have been aired in rural areas that educate peasants on these issues and emphasize the importance of working together to come up with solutions. FONDAMA is also working with farmers to adapt to climate change by shifting planting schedules, planting drought resistant crops, diversifying crops, and implementing techniques that minimize the effects of flooding. With the support of partners, FONDAMA distributes seeds to places touched by natural disaster and trains the peasants farmers on agroecological methods that aim to cool the planet.

Beyond supporting peasant farmers with practical skills and knowledge, FONDAMA is working to make policy changes at the local and national levels. The network is putting pressure on decisions-makers and authorities to legally recognize the land rights of the rural poor and place smallholder production at the heart of agricultural development strategies.

We invite friends of social justice, progress, and sustainable development to accompany FONDAMA in the struggle to ensure food sovereignty for Haitians. We will continue to fight to eradicate hunger and poverty at the root.