A call to stand in solidarity with the Anglophone community 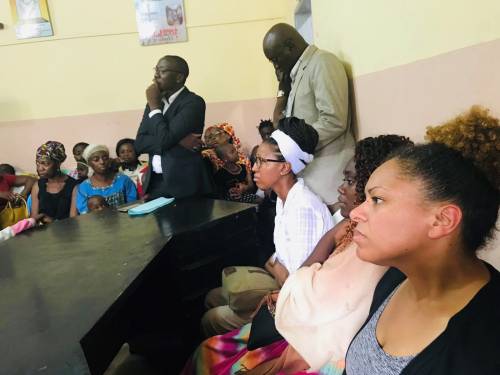 Listening to the stories of Anglophones who have been internally displaced.

Squeezing into the crowded room, there was standing-room only. Mothers, fathers, daughters, sons and grandparents filled the room. Four chairs had been saved for us, facing the full room of internally displaced people from the Anglophone crisis in Cameroon. It was hot and as we sat, I could feel the energy in the room; the curiosity of who we were, the heaviness of the trauma experienced and the hope for better days.

I was a little overwhelmed. Who was I to get to hear their stories? I’m such a small part of the puzzle, how can I offer support to people who’ve experienced tragedy far beyond my understanding? As our meeting began, I had to silence that internal dialogue and, for the next hour or so, I listened.

One by one, I listened to the stories of ordinary people whose lives were turned upside down. Over the past three years, Anglophones in the northwest and southwest regions of Cameroon, have experienced intimidation, violence and destruction by the Cameroonian military, armed separatists or both. While some Anglophones have stayed, others have fled. Those journeys of fleeing to the bush for days and weeks were riddled with difficulty. Many spoke of trudging long distances (some in excess of 40 miles on foot), lacking food and water, battling mosquitoes and enduring sickness, injuries, and the sheer trauma from the violence. One young man recounted how he was living with 18 people without enough food to go around.

Cameroon, for the most part, has been an example of peace and stability to surrounding regions experiencing multiple conflicts. After World War I, the former German colony was split between the French and British. While English and French are both official languages of Cameroon, the English-speaking Anglophones are the minority and they have long felt oppressed. When the federal structure of the state was dismantled in 1972, Anglophones were further marginalized by the Francophone majority.

It wasn’t until 2016 that the Anglophones began to protest the Francophones imposing their French-speaking judicial and educational systems. When Anglophones peacefully took to the streets in 2016, military forces responded with violence and arrests, which ignited the conflict. In fact, the violent response fueled the formation of armed separatist groups and the demonstrations continued. Businesses and schools were shut down in protest of the Francophones, but after three years these decisions had devastating impacts. The brutality between separatists and the military has limited the Anglophones ability to move freely and has incapacitated daily life.

A mother shared how her farm was destroyed which, like many others, was her livelihood. Once she and her children made it to safety in the largest city in Cameroon, Douala, she attempted to reestablish her children in school. Unfortunately, the school fees were much more than she could afford.

One teenage girl was eager to share her story, and I could sense her urgency. When she stood, she was small in stature but assertive with her body language. Like many others, she explained escaping violence in her village and thought life would be different in Douala. Regrettably, the school fees were again an obstacle even here in this place of so called “refuge.” For a moment she went silent while tears streamed down her face. It was painful. She was devastated, and I could feel it. But she lifted her head, wiped her face and went on to say that she suffered back in her village and she is still suffering here by not being able to go to school. 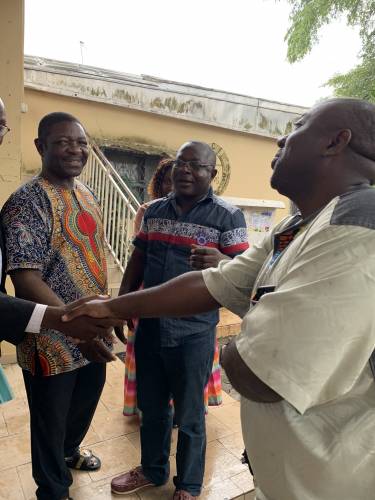 The impact of the violent conflict on the children of Cameroon is unconscionable. Not only are children being denied basic rights to food, water and safety, they are also experiencing disruptions of education for years at a time. The UN reports, more than 80 percent of the schools in the Northwest and Southwest regions of Cameroon are still closed. Even when displaced children are able to return to school, educators are finding it difficult to place children who have such large gaps in their education.

According to UN News, the conflict has left 1.3 million people in need of assistance. It is estimated that 650,000 of those are children. The UN and others in the international community, say the conflict has been a largely neglected one by the media and Cameroon’s government. The Cameroonian government’s role and denial of the severity of the conflict only further restricts peaceful dialogue and aid to the affected areas. Lewis Mudge, Central Africa’s director at Human Rights Watch, said, “Instead of seeing that justice is done, Cameroon’s authorities deny that their forces are killing and raping people, so it is essential to remind them that the world is watching.”

Presbyterian Hunger Program’s Joining Hands — grant partner, RELUFA (Reseau de Lutte contre la Faim or the Network for the Fight Against Hunger), has been addressing the crisis through documenting abuses and advocacy to both the government and the UN to respond. Many of RELUFA’s staff have family that are experiencing the violence firsthand. A phone call from one of these loved ones can be a blessing or source of anxiety, depending on the news. This conflict is traumatizing for people experiencing it and for the loved ones who want to secure their family’s safety. Furthermore, once a loved one has escaped the violence, there’s another layer of financial and emotional strain for families that house, feed and care for those who are displaced.

After hearing as many testimonials as possible, Presbyterian Hunger Program staff were asked to speak. In that moment, my mind raced trying to find the perfect response, but who was I kidding. Nothing I could say or do would “make it better” or “fix it.” My heart was so heavy and full, the first thing I thought to do was to pause and look around the room. Then I said, “Thank you for sharing your stories with us. It is my honor to hold them and know that I see you and I hear you.”

While it became clear that nothing would lessen the trauma they’ve experienced, what I could do was hold space for the grief and bear witness to the pain and suffering. I promised to honor their stories and to use my voice to help amplify them.

So, now that you are aware of the human rights abuses Anglophones are facing, I ask that you don’t look away. Here are a few ways you can use your voice to shed light:

Pray: Pray for an end to the violence in Cameroon and that all parties will engage peace talks with a goal to seek justice.

Act: Click here to contact your congressional leaders and the secretary of state and ask them to support an end to the violence in Cameroon.

Give: Support the work of RELUFA (the Network for the Fight Against Hunger), a Presbyterian Hunger Program partner of Joining Hands —Cameroon.