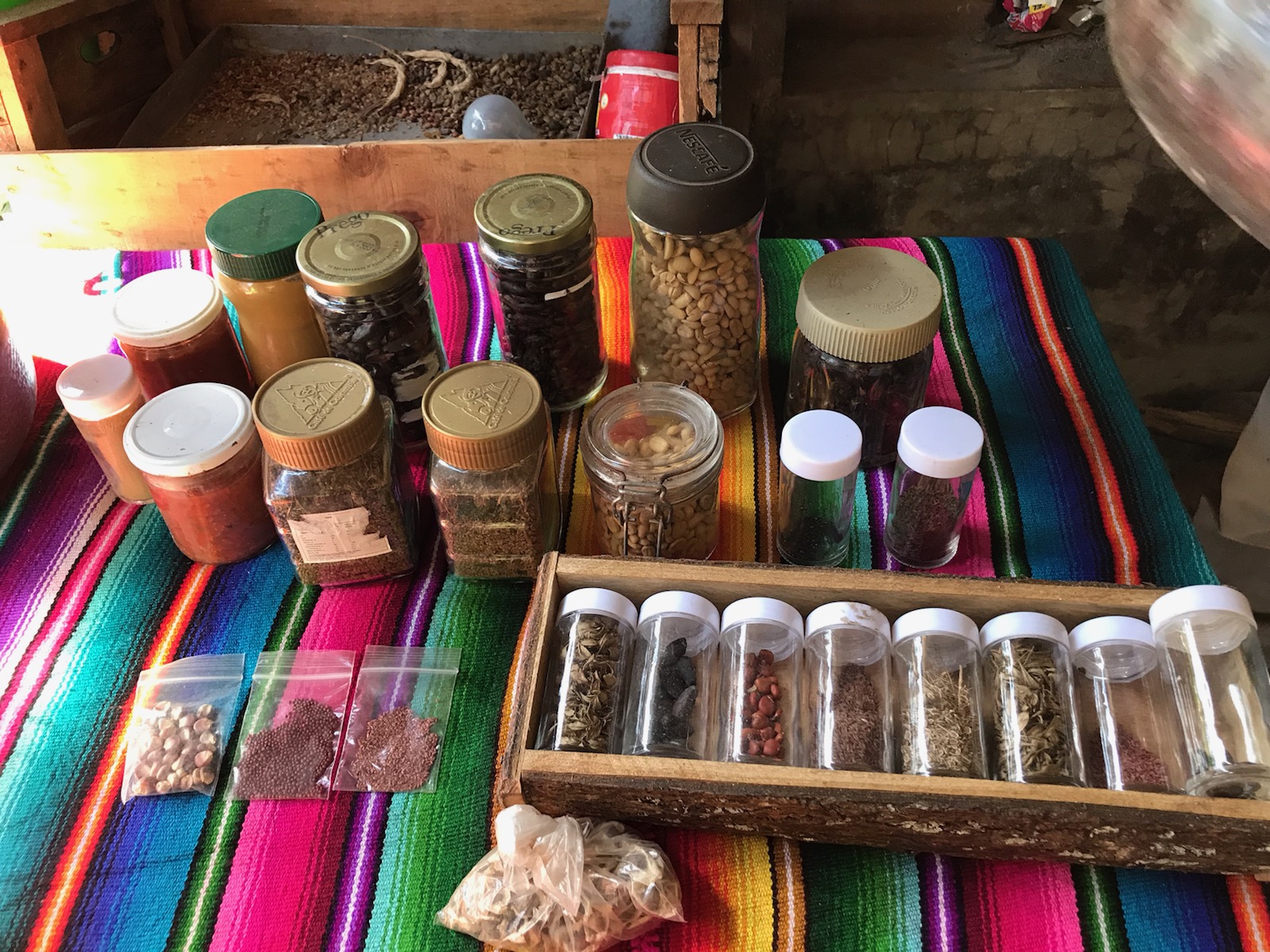 Selected seeds from a farm in San Luis Tappa, El Salvador kept for the next planting season. Photo by Valery Nodem.

Names have been changed in this article to protect the identities of individuals for safety reasons.

Last December, I traveled to El Salvador to visit our partners working with the Joining Hands network Asociación Red Uniendos Manos El Salvador (ARUMES). ARUMES is a network of churches, nonprofit organizations and community groups that united forces in 2010 to raise awareness on the growing use of pesticides and the risks they pose to health in El Salvador.

In the last decade, there has been a surge of chronic kidney disease among farmers in El Salvador, and ARUMES is educating and training people on organic agriculture to reduce their dependency on agrotoxins, which are suspected of contributing to the disease. They are also connecting local communities and farmworkers to people in power to develop legislation that bans the use of agrotoxins in El Salvador.

My trip to El Salvador coincided with the “migrant caravan” of 7,000 people that was headed to the U.S. from countries in Central America that gained so much political attention in the U.S.

Leading up to my trip, there was a lot of negative news coverage and Presidential tweets describing migrants as criminals and rapists. And of course, the political solution proposed was to secure funding to build a wall to prevent migrants from entering the United States.

As I talked with friends and colleagues in El Salvador, the stories I heard that often force people to leave their natal countries are very different from what we hear in some media in the U.S.

Many farmers described climate change as a big problem they are experiencing. Because of excessive drought or rain, harvests are significantly smaller from year to year, leading to less food availability. People are becoming more dependent on the market for food purchases and food prices are high. Farmers have reduced incomes and therefore have less money for education, healthcare and other family needs. As life becomes harder and jobs are limited, many young people feel like their only option is to leave and find ways to support their parents and family who have remained at home.

Roberto is a farmer and indigenous person working to reclaim indigenous culture and food in his community. He shared that due to climate change, many farmers are abandoning agriculture. Due to El Niño, in 2015-2016, countries like El Salvador, Guatemala, Honduras and Nicaragua, that are in the “drought corridor”, lost 80% of their crops.

I heard a lot of stories of violence and poverty as important drivers of migration. Many analysts consider El Salvador as the most violent country in the world. People threatened with violence are forced to flee for safety, refuge and asylum.

Gang members started following Roberto. They wanted to prevent him from accessing the land where he used to work so that he wouldn’t witness the burying of bodies they were doing there. Ever since, he has been working very intentionally to write down the work he has devoted his life to so that in case they “cut his head” at least the work can live on and be shared with others.

I spoke with another farmer named Luis. About a year ago, Luis started receiving text messages on his phone from people he did not know asking him for money, data for their phone, or access to his land for food or even to bury people. He was hesitant to give them what they asked for, so they told him they were going to hurt his family and they knew where he lived and where his children were going to school. In 2018, Luis sent them about $1,500 out of fear for the lives of his family members. The same people have also asked him to surveil police movements and alert them when he sees them in the neighborhood.

Many others shared stories about how difficult and dangerous it is to move from one neighborhood to the other. I spoke with Elena, who works for a non-profit, about the difficulty of entering certain neighborhoods. Elena’s mother lives a few blocks from her house and can come visit her and her family, but gangs prohibit Elena and her family from entering her mother’s neighborhood.

What is common in all these cases is that people are concerned for the safety and wellbeing of their families. Most people I talked with feel disempowered and have no other alternatives but to leave.

We need to shift our lens on migration and try to put ourselves in another’s shoes and understand the factors that are pushing them to flee. So many different factors affect the decision of people to leave their countries: inadequate human and economic development, war, civil conflict and violence, climate change, land grabbing, or in certain cases personal willingness to migrate. Behind migrants there are dreams, aspirations, hopes and desires for a better life.