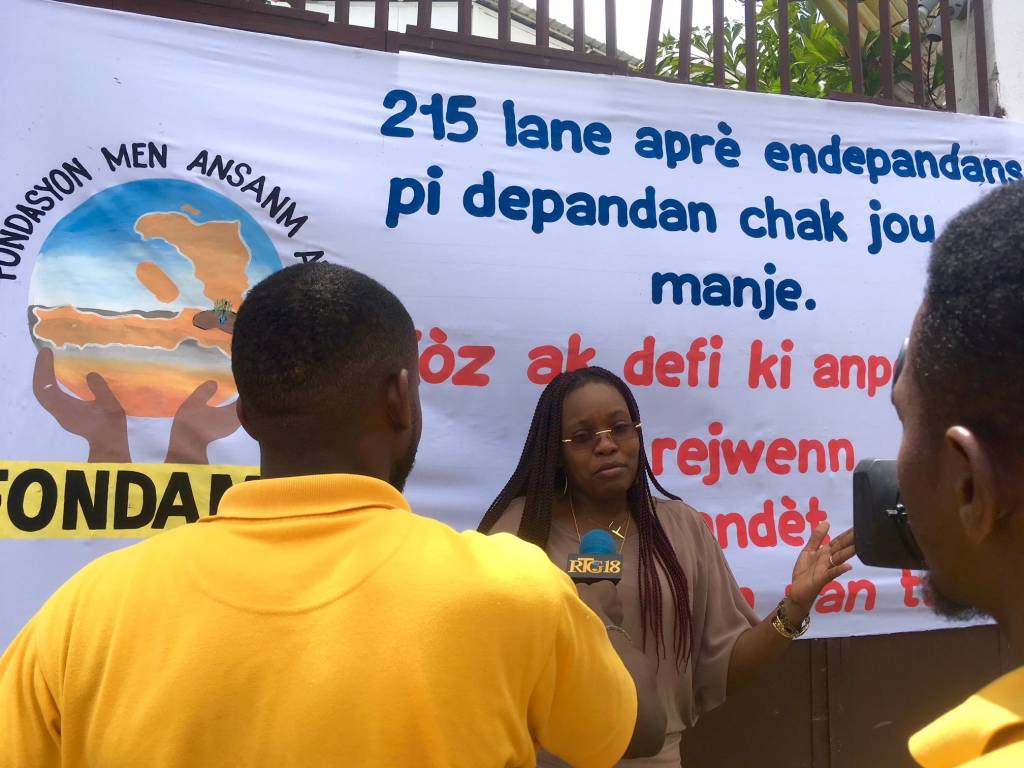 Fabienne Jean, coordinator of FONDAMA, Hands Together Foundation of Haiti, speaks to the media about the need for solutions to Haiti’s poverty in June 2018. Photo by Cindy Corell.

Haiti operates daily in crisis mode. Eighty percent of Haitians survive on less than $2.40 a day. Inflation puts the price of daily necessities further and further out of reach for the average family. The cost of education, too, is rising, so parents will do without to send at least one child to school.

It’s miserable for many, so much so, it’s become normalized. But in early July, the many crises erupted. Haiti’s history of carrying heavy debt, failing to make necessary improvements to its people’s quality of life and deep corruption within its government hit a tipping point with the people in the streets.

Then, on July 5, in anticipation of fuel price increases from 38 to 47 percent, protestors began blocking roads and burning tires. By the next day, when the announcement was made, those protests multiplied exponentially. Protestors cut off access to Port-au-Prince. They burned vehicles and buildings. They broke into and burned businesses large and small.

At the root of the anger is a requirement from the International Monetary Bank that Haiti drop historic subsidies for fuel, thereby raising the cost of gasoline and diesel. It follows years of corruption charges leveled against President Jovenel Moise, members of Parliament and other leaders in the PetroCaribe scandal.

The country came to a standstill. Prime Minister Jack Guy Lafontant reversed the fuel price increase, but protestors stayed in the street, calling for his ouster. He resigned on July 13, bringing calm to the city, but that calm is only skin-deep. A simmering anger remains.

FONDAMA’s coordinator Fabienne Jean and other civil society leaders met in early August to determine ways to reach out to government officials in response to the decades-long corruption. Together, they asked for transparency in the government, an end to the lawlessness, justice reform, and even a new Constitution.

FONDAMA, the Joining Hands network in Haiti, (Hands Together Foundation of Haiti) has been pecking away at the root causes of this country’s dire poverty:

1.      To combat the effects of climate change that bring catastrophic storms or starving drought, FONDAMA members have led training sessions in rural communities, including sessions about climate change and its effects and issues creating poverty in other parts of the country.

2.      To combat food imports that undermine the small profits of local producers, FONDAMA members have supported local farmers and found ways to bring farmers from all regions together. Also, FONDAMA has offered training in different forms of advocacy, how each organization can play a role in network-wide advocacy campaigns and the power of advocacy against corrupt governments,

4.      FONDAMA sponsored a conference in early June, attended by people from organizations, civil society groups and the media, to highlight issues of climate change, food imports and land grabbing, and search for solutions.

5.      And in each of these steps, and many others not mentioned here, FONDAMA is working with its hundreds of thousands of members in nine of the 10 departments (states), making it known to elected leaders and prospective candidates that the people expect positive change. But inflation and misery continue to rise.

It’s early yet. We do not know when change will come. But immense frustration at the poor conditions in which Haitians are living has lit a fire in the streets, and civil society, FONDAMA included, is at the table to press elected leaders for change. And while we do that, we continue our work in rural communities, educating and training new leaders for a better tomorrow.