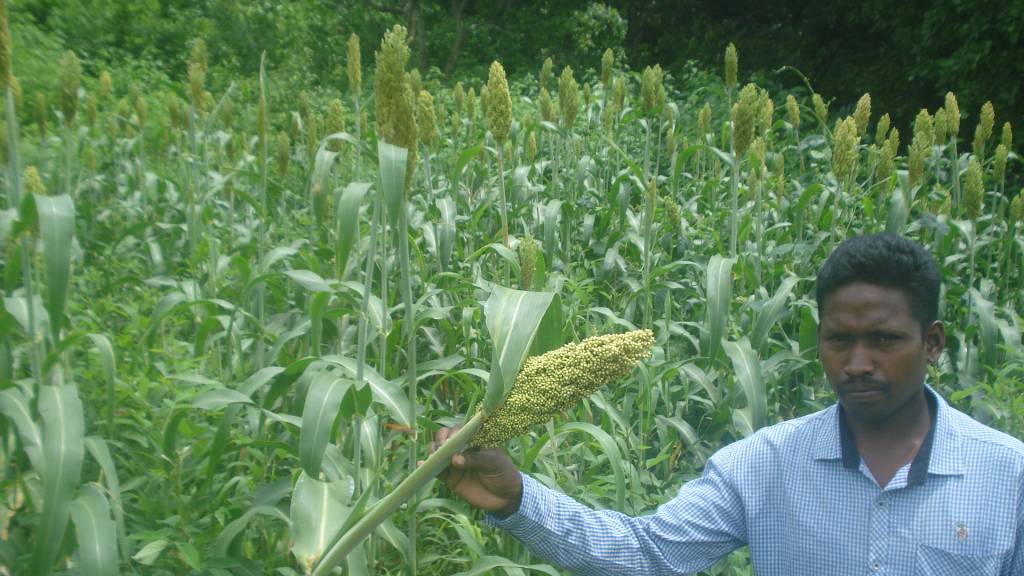 Once Millets were an integral part of the culture and diet of the tribal peoples of Srikakulum District of Andhra Pradesh in India.  However, over the last few decades, due to impacts from the green revolution and unsupportive measures by the state, nearly 85% of millet cultivation in this region started to decline while other crops like rice, sugarcane, and groundnuts, took their place.

In early 2014, CAVS (Chinnaiah Advasi Vikasa Sangam), a partner organization of Chethana, the Joining Hands network in India, began a robust campaign to reclaim lost native seeds with the help of Chethana.  CAVS identified 10 farmers in each of two small villages called Chaparayaguda and AK Baleru who were willing to cultivate millets to mitigate the food and nutritional crises and restore native food culture.

The campaign was initiated at a critical time when native seeds had not been available for the past three years and communities had stopped holding seasonal seed festivals since there were no seeds to celebrate. After receiving seeds, the villagers finally organized a seed festival during the season called ‘Chaitra Amavasya’ and sowed seeds into their mountain terrain landscapes.

In September 2014, the 20 farmers had a bountiful harvest of foxtail millet, finger millet, pearl millet, pigeon pea, sorghum, and little millet. There was a bounty of food grains available, including local varieties. The farmers were able to revive lost millet cultivation and they started to conserve heritage seeds from then on. The best seeds were collected and put in storage for the next season and then passed on to fellow farmers interested in cultivating them.

CAVS, in collaboration with Chethana, has now trained 150 farmers in preparing their own bio-fertilizers, farmyard manure, vermicompost, and neem decoctions. Farmers now have reduced input costs and no longer have to depend on external dealers and suppliers.

Collective effort means food security is restored in these two villages and people are nutritionally secure as well. The farmers are currently looking to organize themselves into a Farmer Producer Organization (a cooperative) to improve marketing linkages, access to technology, knowledge systems and access to loans.

Meanwhile, the 2013 National Food Security Act was passed including language that declares millets as one of the food security components. This is a hopeful development for the future of not only tribal peoples in the Srikakulum District but for all of India. The true challenge of course now lies in realizing these provisions through appropriate rules and guidelines.