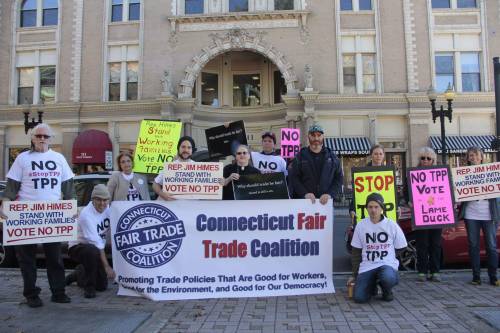 Five years ago several dozen of us gathered in front of the J.W. Marriott Hotel in the Miraflores district of Lima. Inside were officials of the twelve nations negotiating the Trans Pacific Partnership (TPP) free trade agreement. Outside, we,  a small coalition of church and civil society members with the leadership of Red Uniendo Manos Peru, were among the very few people in the world apart from government agencies and corporate lobbyists who even knew about the TPP.  Fast forward to the first week of November and there were several thousands of us gathered in front of the Congress of Peru in downtown Lima crying out for government representatives to not ratify the TPP. Yes, the TPP had advanced, but so did our movement.

Some five years ago, all we were asking for was that the officials reveal the text of the agreement they were negotiating – if not to us, at least to our representatives in government. Our concerns were that the language would replicate other recently negotiated trade deals, such as the U.S.-Peru free trade agreement. In particular, we worried about extraordinary rights provided to foreign investors, which would allow such investors to sue States if the State´s enforcement of regulations threatened the expected profits of investments.

In fact, this is exactly what happened within the framework of the U.S.-Peru agreement when the infamous Renco Group of New York sued Peru for $800 million because the State enforced environmental regulations in the town of La Oroya where Renco´s subsidiary Doe Run Peru operated a metals smelter that had left 99% of the children with lead poisoning. So, we wanted to make sure that such unscrupulous investors would not be able to avoid their responsibilities by way of the TPP, too. While we did achieve a handful of meetings with negotiators of ten of the twelve nations, including the U.S. and Peru, ultimately our words, stories and evidence fell on deaf ears. So we started protesting.

For the past five years we have continued to protest. We have educated the people and the press. We have met with more government officials and congressional representatives. We have marched in the streets.  And we have connected and collaborated with allies across the globe, especially in the United States from where the TPP originated.

The Trade Reform Table of the Presbyterian Hunger Program, coordinated by Rev. Pam Lupfer, has been instrumental not only in connecting Presbyterians in the U.S. with grassroots movements working to dismantle the TPP but also in collaborating with our efforts in Peru. Most recently, in the days leading up to the presidential election in the U.S. and in anticipation of a possible lame-duck vote on the TPP in the U.S. Congress, we focused our efforts on trying to swing the votes of two U.S. Representatives who had previously shown support for the TPP: Rep. Jim Himes of the 4th District of Connecticut and Rep. Diana DeGette of the 1st District of Colorado.

Here you can read an op-ed written by our Peruvian partners that was published in Himes´ home district, a letter to Himes signed by 11 Peruvian Congressmen, and Letter to Rep. Himes and DeGette from mission co-worker Jed Koball, articulating the specific argument of how the TPP provides extraordinary rights for foreign investors and undermines the most basic human rights of the people.

The election has now passed, and because of the long hard years of advocacy, it now appears that the TPP will not come up for vote in a lame-duck congress in the U.S. In the meantime, the remaining eleven nations of the TPP continue to consider moving forward without the U.S., so we remain vigilant in Lima in order to prevent a vote for ratification in the Peruvian Congress.

Regardless of what happens with the TPP, we have wakened the consciousness of the people from North to South regarding the important role of trade in the world. In an ever globalizing society, trade is the tool by which governments and corporations impact markets, regulations, and ultimately social and democratic structures. Until we become more immersed as a Church and as concerned citizens in the shaping of just trade agreements, the gap between the rich and the poor will not only continue to increase, our Common Home will risk further destruction, making all of us vulnerable.