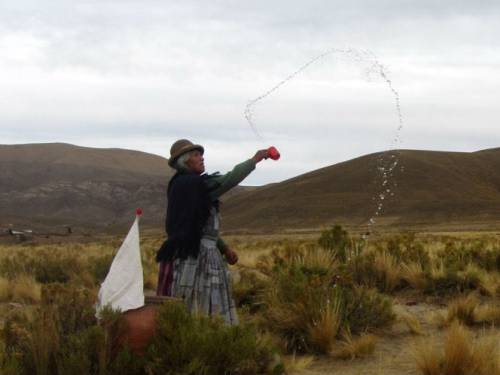 A woman of the Peñas community blessing the land with water from the communal pot. Photo Credit: Chenoa Stock.

Twenty years ago, the Peñas Canyon, located in the Pazña Municipality and Department of Oruro, Bolivia, was a prosperous community that thrived from diverse, agricultural production, including potato, quinoa, fodder, broad beans, corn, a variety of tubers, etc. But now, the community solely depends on livestock subsistence farming for the family, such as sheep and cow breeding, due to the disappearance of the community’s rivers and water sources.

According to the Peña community members, the disappearance of water in the area, seen by the dry rivers and scarcity of freshwater sources, is a consequence of the rupture of freshwater veins due to mining activity. Many miners use dynamite to extract minerals from the land, which subsequently breaks the water veins that used to flow into Peñas. This disruptive mining activity has caused the waters to take another route, thus affecting community life in all forms.

The lack of water has also caused other negative changes. Many youth of the Peñas community have migrated to cities in search of a better quality of life. Currently in Peñas, the majority of the community is composed of elderly men and women who are barely surviving daily life.

The elderly and poorer families hold on to hope, as they have no other option but to remain in Peñas, living from day to day. But they also hold onto and remember their ancestral knowledge, shown in their faithful practice of the Water Exchange ritual. This ceremony is carried out by different communities of the area, including the participation of chasquis, people chosen to travel to the major water sources of the surrounding mountains. Each chasqui carries a bottle of water from Peñas and an offering of various symbols and sweets for the Pacha Mama (Mother Earth). The chasqui leaves the offering and water in exchange for water from the mountain source and prays to the Creator that their lands be blessed again with water and rain. The rest of the community and authorities gather around La Mesa (The Table), the principle gathering place near the dry riverbed, as they await the chasquis’ return.

Upon their return, the chasquis are greeted with water and festive band music, as they pour their water into the communal water pot in La Mesa, celebrating and hoping that the rains will arrive and that responsible mining would protect their precious and scarce water sources.

According to the witness of Juan Carlos Fuentes, a Peñas community member, “Peñas used to be surrounded by the Asanaque Range, with majestic snow-capped mountains that provided water for the community. Sadly, the range is now abandoned and without life.” Juan Carlos presumes that “this change is also due to the global warming that community members, ourselves, are causing.”

As human beings, we must respect the natural laws of our Creator. But it is also important to work towards a Water Law that will allow humanity to defend its rights to a dignified life with clean water. With this objective, UMAVIDA, the Joining Hands network in Bolivia, has focused its campaign, “Water is Eternal Life,” on promoting the passing of the Water Law Bill in Bolivia that, since 2012, has been paralyzed in the Central Government chambers.

It is with Juan Carlos Fuentes, the Peñas community, and our Bolivian brothers and sisters, with whom we walk each day to struggle for environmental justice. As the Bolivian Constitution, newly written and approved in 2009, is slowly writing and passing the laws that support it, we hope that our accompaniment will create a space where Bolivians’ voices can be heard and where God’s Creation will be respected and cared for by the government and its people.

As we walk each step of this campaign and listen to and learn about where it is that God is calling us, we are grateful for PC (USA) support and accompaniment. Bolivia is not the only country with water issues and we hope our cry for environmental justice inspires you to insure that same justice for your congregation and community.