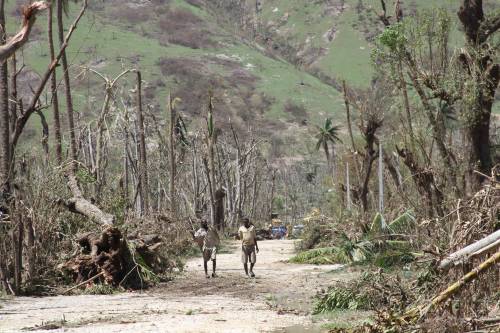 Two residents of the Grand Anse department of Haiti walk along a muddy road, framed by the devastation of trees and vegetation destroyed by Hurricane Matthew on Oct. 4. (Photo courtesy of Global Empowerment Mission)

Our brothers and sisters here in Haiti are suffering – again, and as they too often do.

The effects of Hurricane Matthew of Oct. 4 were horrendous. Most people in the far southwestern tip lost their homes, gardens, livestock, and many, their lives. Death tolls range between 550 and 1,000.

Many still are missing.

The southwestern tip of Haiti is only a few miles wide at the most. It’s tropical – sandy beaches giving way to steep, high mountains. And Hurricane Matthew struck it at blunt force – with winds estimated at 145 miles per hour. Rain deluged for hours.

I’m reminded again why we work here in Haiti in accompaniment. It is not enough for us to replace the goods and basic necessities that disaster steals from our brothers and sisters here. We are here to accompany them in fighting for changes that will reinforce the Haitian people in their ordinary lives!

The right to own their property without fear of land-grabbing;

The right to sell their farm produce and meat products without unfair, import competition;

The right to equal respect under the law without regard to gender.

And this is just a start.

The hard work already has begun as our Haitian grassroots organizations advocate for all these rights and more. The work is difficult.

In late 2013 and early 2014, 800 Haitian families were pressed off their own land by a corporation in cahoots with the Haitian government. Eight hundred families forced to find new homes after losing their only source of livelihood – their gardens. That’s about 4,000 women, men and children doing without. And the corporation used that land to grow food for export and profit, not even to grow food for people in the poorest country in our hemisphere.

Haitian rice producers have faced financial strife since the 1990s because foreign governments convinced the Haitian government to lower its import tariffs to a miserable 3 percent, allowing the U.S. and other countries to bring in cheap rice. The local rice market was gutted, farmers went out of business and the national diet changed from mostly corn to much less healthy white rice.

And yes, there are so many other problems Haiti faces that must be resolved. Haitians need a strong government, ample quality-paying jobs, improved and accessible healthcare and education. Other organizations, many of them Haitian-based, are working on those. In our Joining Hands network, FONDAMA, our Haitian partners are working to promote a healthy Haitian agrarian base. Each of our grassroots farmer organizations around the country are working on local issues, and coming together, they are advocating for change.

Non-governmental organizations (there are thousands working here in Haiti, most of them foreign), Haitian groups and other platforms are handling various aspects of what is needed here. Unfortunately, many of the foreign groups work under their own, preconceived notions of what needs to be done and how, without regard to the ideas, knowledge and opinions of the Haitians themselves! These efforts rarely bring lasting (or even temporary) positive change. How often do we hear: We’ve been working in Haiti for decades, and yet there is no change? Why is that?

And the answer often lies in the ways we work.

After spending three years living in Haiti, I understand that we MUST listen to those we say we want to help BEFORE we commence.  Even better, accompanying the Haitian leaders as they do the necessary work, and with mutual respect and mutual accountability, accompany them in the effort.

In this way, it is my hope and my prayer, that in future years, when disasters strike as they will, the people and the nation of Haiti will have the strength, resources and ability to have prevented chaos, or lacking that, respond on their own.

But as we once again find many Haitians coping with the effects of a monstrous disaster, we also respond with an immediacy as our resources allow.

This week FONDAMA will take clean water tablets, cholera medicines and seeds that farmers can plant immediately to the Southwest where Hurricane Matthew made landfall. It will be a difficult trip, even a dangerous trip. Please keep our staff in your prayers. And we will return with current photos and news of what our brothers and sisters in that region are doing to help their neighbors.

Again, thank you for all your support and prayers. I am grateful to be on this journey with you.