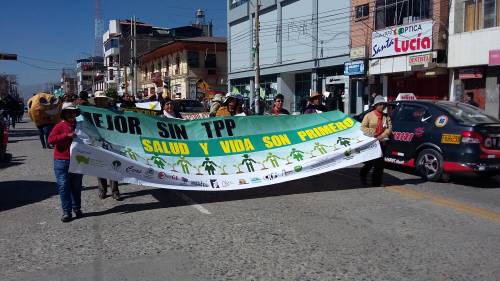 Residents of La Oroya, Peru protest the possible ratification of the TPP.

Presbyterians are working in collaboration with Joining Hands partners in Peru, Public Citizen´s Global Trade Watch and others from civil society in the U.S. to prevent a lame-duck vote on the Trans-Pacific Partnership free trade agreement that has been a focal point of the presidential election in the United States. Despite opposition from the presidential candidates of the two major political parties in the U.S., President Barack Obama continues to press for the ratification of the trade agreement negotiated between the U.S. and eleven other countries including Peru and encompassing nearly 40% of the global economy prior to his exit from office in January of next year. In the meantime, Presbyterians and partners are targeting two Democratic Congressmen from the House of Representatives who have supported Obama´s TPP initiative and also happen to be Presbyterians: Rep. James Himes of the 4th District of Connecticut and Rep. Diana DeGette of the 1st District of Colorado.

The Presbyterian Church (USA) has a clear position opposing the TPP, because it would roll back access to life-saving medicines, undermine environmental protections, jeopardize the safety of the food we feed our families, lower wages and offshore jobs, and elevate investor rights over human rights and democracy. On this last point, our Joining Hands partners in Peru have been instrumental in illustrating how a lawsuit filed by New York based Renco Group against the State of Peru for allegedly violating its investor rights as stipulated in the U.S.-Peru free trade agreement has effectively hi-jacked justice for the long-suffering people of La Oroya, Peru who continue to live with overwhelming levels of heavy metal contamination caused by the irresponsible smelting activity of Renco Group´s primary investment in Peru.

In the letters below addressed to Reps. Himes and DeGette, PC(USA) Mission Co-Worker Jed Koball, who serves with our Joining Hands partners in Peru, articulates how the investor rights clause found in the TPP will continue to undermine the rights of the people of La Oroya and throughout the world where unscrupulous foreign investors escape their responsibilities.