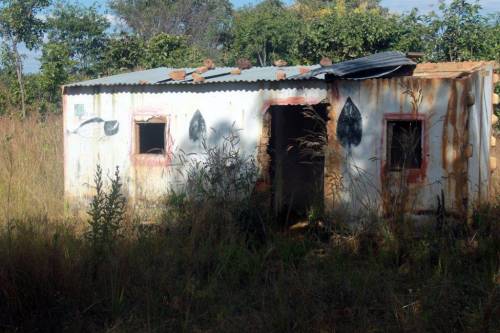 In 2004, residents of Kishieba village in eastern Democratic Republic of Congo (DRC) were displaced from their ancestral land to make way for the Frontier Mine, a cobalt and copper mining project currently owned and operated by Eurasian Natural Resources Corporation (ENRC). The residents of Kishieba were resettled in Kimfumpa, a newly created village in the Haut Katanga Province. As too often is the case, the resettled population was not consulted in the relocation process and therefore was not provided a choice for where to move. The decision was made strictly by the state in consultation with the company.

Now the Kimfumpa villagers, have only memories of better times in their ancient village of Kishieba.  The villagers, complain that unlike Kishieba, the soil in Kimfumpa is not fertile and hence not suitable for agriculture. There are also no rivers or streams that run through the village. Kimfumpa is located far from the main road and lacks infrastructure, running water, and electricity. To facilitate the resettlement in Kimfumpa, the ENRC constructed 52 houses for a community of about 400 inhabitants, provided a water point and a building to serve as a health centre, but the state has failed to equip and render functional the health centre nor has it built a school.

The livelihoods of the resettled community have suffered from the relocation as well. The villagers aren’t able to cultivate vegetables, cassava and maize as they were before due to poor soil quality. Kimfumpa is also very far from neighboring markets, making selling products and produce too difficult. The main source of income comes from charcoal sales in neighboring towns in Zambia, hundreds of kilometers away. There are virtually no education opportunities for the village children; they have to trek at least 20 kilometers to reach the nearest school. Many community members have abandoned the village to look for opportunities elsewhere.

In May 2016, Valery Nodem, Coordinator of Joining Hands for the Presbyterian Hunger Program, and I travelled with Ibond A’nzam, the Coordinator of the Platform of Civil Society Organizations Intervening on Mining (POM), the Joining Hands partner in the Democratic Republic Congo, to visit Kimfumpa. Our visit confirmed the reality that the resettlement of the population in Kimfumpa has led to a worsening of the social and economic conditions of the people. This is a typical case of what is often referred to as the resource curse, where the population in a resource rich area does not necessarily benefit from the huge revenues generated from mineral extraction projects.

During our visit, we heard many testimonials from community members on their poor life conditions and exclusion from decision making processes. Fueled by these concerns, POM has engaged in advocacy to push the state and the ENRC to start providing infrastructure and social services to the Kimfumpa community. This initiative is so important because without any action, the people of Kimfumpa will continue to suffer.

This case documents that the resource curse does not stem from the mineral resource endowments themselves, but from a lack of good governance on the part of government agencies charged with negotiating contracts, supervising resource extraction activities and managing the revenue for the common good.

Kimfumpa is not the only case in the DRC of mineral extraction with doubtful community reward. This is why social activists must redouble efforts to place pressure on the state and companies to uphold their social obligations.