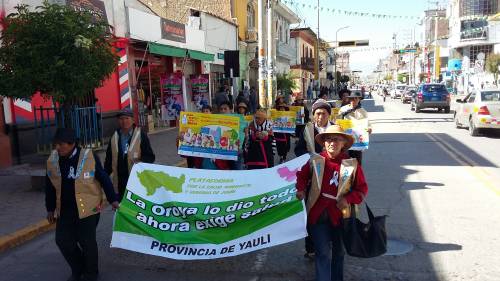 In an unexpected turn of events, after five years of closed-door hearings, the arbiters overseeing the case of The Renco Group, Inc. v Peru issued a surprise decision on July 15, 2016 in favor of Peru on grounds of jurisdiction. Early reactions from the Peruvian government and civil society expressed contentment with the tribunal’s ruling.

But, the reaction from lawyers representing The Renco Group, Inc. was not nearly as distraught as one might expect, leading some of us to question what this “victory” signifies? And more to the point, what does it mean for the people of La Oroya?

To quickly recap, La Oroya, Peru is one of the ten most contaminated cities in the world, where 97% of the children ages 6-12 have been shown to have severe and chronic lead poisoning due to the emissions from a metals smelter operated by Doe Run Peru and owned by U.S. holding company The Renco Group, Inc. who purchased the smelter from the State of Peru in 1997.

Upon purchase of the smelter, Doe Run Peru signed a contract with the State of Peru committing to modernize the plant and install appropriate technologies within ten years in order to abide by environmental regulations.

Since 2000, Red Uniendo Manos Peru, the Joining Hands network in Peru, with the active support of the Presbyterian Hunger Program and Presbyterian World Mission, has been advocating for the enforcement of environmental regulations in La Oroya, specialized health care for affected people, and the remediation of soils.

In 2009, Doe Run Peru, after having failed to comply with its contractual agreement with the State, and having increased environmental contamination in La Oroya, and despite having remitted hundreds of millions of dollars back to Renco Group in the U.S., filed for bankruptcy in Peru.

In turn, as permitted by the U.S.-Peru free trade agreement, The Renco Group, Inc. filed an arbitration against the State of Peru for $800 million (expected revenue losses) in the International Center for the Settlement of Investment Disputes (ICSID) in April of 2011, claiming that Peru had violated Renco Group´s rights as a foreign investor, arguing that Peru’s enforcement of environmental regulations was both too costly for the company and surpassed its expectations when it took over the smelter, thus allegedly violating its rights as an investor.

After more than five years of deliberations, the tribunal issued a decision based on grounds of jurisdiction. In effect, the arbiters of the case agreed that when Renco Group filed its arbitration in ICSID it did not fully waive its right to also file lawsuits in Peruvian courts, as required by ICSID; therefore, they dismissed the case without ever hearing the merits of the case itself. Thus, on legal technicalities, Peru escaped judgment.

To be clear, this is a hollow victory. Renco Group still reserves the right to file arbitration again in ICSID, and this is precisely what it intends to do upon fixing the legal technicality addressed by the tribunal. This is to say, the case is not over as it will likely be heard by a different set of arbiters in ICSID and potentially drag on for another five years.

So, what does this mean for the people of La Oroya? To begin with, La Oroya continues to be one of the most contaminated cities in the world despite the fact that the smelter has not been fully operative for more than six years.

The board of creditors overseeing the bankruptcy case of the smelter have been trying to liquidate it, but are finding it difficult to find a buyer, leading one to question whether the smelter is even profitable at all. Nonetheless, there is great interest in getting the plant operating again, not only by the workers (many of whom were laid off or are being paid 70% of their salaries) but also by the mining industry itself and now the incoming President of the Republic, Pedro Pablo Kuczynski who took office on July 28, 2016.

In the days leading up to his inauguration, Kuczynski stated that reinitiating the operations of the smelter in La Oroya would be a priority for his administration because it would allow the mining industry to export a refined product, adding greater value and stimulating the economy.

He also argued that to make this happen environmental regulations would need to be lowered in La Oroya.

Kuczynski welcomed the decision of the arbiters of the case in ICSID, effectively claiming that it now paves the way for Peru to make necessary decisions without being liable in a foreign tribunal. (To note, the State of Peru believes that future arbiters of a new potential arbitration filed by Renco Group in ICSID will also dismiss the case, this time for reason of statute of limitation, despite the fact that the present arbiters stated that the timeframe to file a new case has not expired.)

One would hope that the government would prioritize the protection of its people and the environment from further contamination by strengthening emissions standards.

Sadly, the viewpoint of the government appears to be the reverse, as it feared weakening the standards prior to the settlement of the Renco case because such action could have been interpreted as favoring a future buyer of the smelter, thus giving legitimacy to Renco´s case that it was not treated fairly by Peru.

This is why we take to the streets.

This is why we march in Lima, in Huancayo, and in La Oroya – demanding specialized health care, environmental remediation, stricter environmental standards.

This is why we hold public hearings in Congress and forums throughout the Region of Junin.

This is why Presbyterians in the U.S. join us in advocating for trade reform so that foreign investors do not have rights that surpass the rights of children to breathe clean air.

Together, we are working to place the health and welfare of the people and the environment in which they live at the very heart of all discourse. Even though our partners on the ground continue to dialogue with local, regional and national legislators and government functionaries, it is clear that logic and sound reason will never be enough to sway the minds of powerful decisions makers.

Only social pressure will do that.

Only we, by the grace of God, can make the world hear and know and believe that people matter more than profits.


One Response to “Peru “Wins!” But What About La Oroya?”