Two PC(USA) congregations in Princeton, New Jersey, offer up an example of how holding difficult conversations can result in real progress healing the nation’s racial divide

LOUISVILLE — During a webinar this week, lay leaders from two congregations — one predominately Black, the other primarily white — shared how their conversations about race and justice in the past year have strengthened their resolve to learn more about systemic racism.

They also discovered what they can do together and as individuals to bend the moral arc toward justice. That phrase was first used by Theodore Parker, who was an abolitionist minister in 19th century, and more famously a century later by the Rev. Dr. Martin Luther King, Jr.

The two congregations are bringing Bending the Moral Arc to the larger Church.

At various times since then, pastors and lay leaders kept the two congregations working toward reconciliation. After the 250th anniversary of Presbyterianism in Princeton in 2005, a partnership between the two churches was formed, and members from both churches began to meet regularly.

During the past year, as emotions ran high following the murder of George Floyd, nonclergy leaders from both churches decided to form small groups consisting of five members from each congregation. For the past year they’ve been meeting weekly to have courageous conversations on race and justice.

During this week’s webinar, four panelists — two from each congregation — discussed how and why they got involved in Bending the Moral Arc.

Michelle Peal of the Witherspoon Street church has been involved in diversity and inclusion initiative efforts in the Princeton community for years. But when Floyd was murdered on May 25, 2020, she noticed that for once, white people wanted to talk about race.

“Not only that, but it was people from our sister church, Nassau,” she said. “I thought, ‘I can’t say no to that.’”

“Leaders kept asking me to participate,” she said. “I’m hoping there’s a small chance that I can make a difference.” 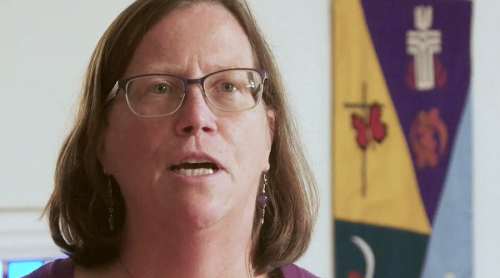 Dr. Claire Mulry of the Nassau church is grateful to have Eskridge as a conversation partner in her Bending the Moral Arc group.

“She’s a big part of my transformation in understanding how much I have to learn about systemic racism — and that it’s my responsibility to learn it,” Mulry said.

Mulry thought she understood the depth of racism. But when Floyd was murdered by a white police officer in Minneapolis, she said she realized she didn’t have a clue.

“I shouldn’t be relying on my brothers and sisters of color to teach me,” she said. “I thought I was an ally, but that’s not enough. I need to be an accomplice in creating an antiracist society.”

Nassau’s Bill Katen-Narvell came of age during the civil rights movement in the 1960s, when racism was more overt. There were still “whites only” water fountains in Atlanta, but by the time he left for college, the segregated drinking fountains were gone. Plus, he had two Black roommates at Princeton University.

‘The moral arc advances because people bend it’

“I wasn’t naïve enough to think racism was over, but it was clear we were moving in the right direction,” he said. “I can’t say that anymore, especially about the last 10 years. I became aware that I had an opportunity to say, ‘The moral arc advances because people bend it.’ I need to work on it.”

The four panelists acknowledged there are multiple challenges involved in having conversations about race and justice.

Eskridge describes herself as extremely private.  She doesn’t necessarily enjoy sharing personal experiences that might inform the group about race. When it comes to race, many of the experiences of Black people in this country are painful for her, she said.

“I’m very passionate about social and racial justice and fighting systemic racism,” she said, “and I have no problem voicing that.”

Yet as a Black woman, Eskridge acknowledges that her passion could get misconstrued as anger or aggression. With differing political views in the groups — at times she had to sit on her hands — she wanted people to feel free to discuss and engage in conversations around these differences.

“I wanted to ensure that each person understood and respected my passion, while I respected their opinions,” she said, “so that we could really listen and be engaged in these conversations.”

In this video below, Eskridge and Mulry describe how participating in Bending the Moral Arc conversations has changed their lives.

After the panel discussion, Denyse Leslie of Witherspoon Street took the 150 webinar participants on a brief overview of the Bending the Moral Arc manual she wrote in order to encourage and assist others in creating race and justice ministries in their own communities. 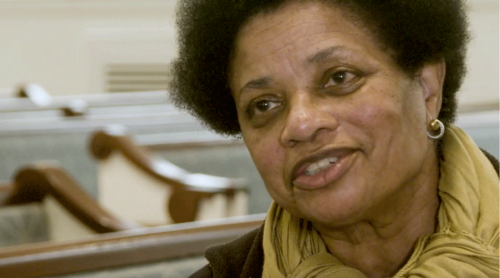 As the 2021 facilitator for the WSPC/NPC Joint Mission Partnership, and one of the founders of Bending the Moral Arc, Leslie said the guide includes sample conversations and other resources and tools.

The entire webinar will be available for viewing soon at  www.pcusa.org/scatteredchurch.