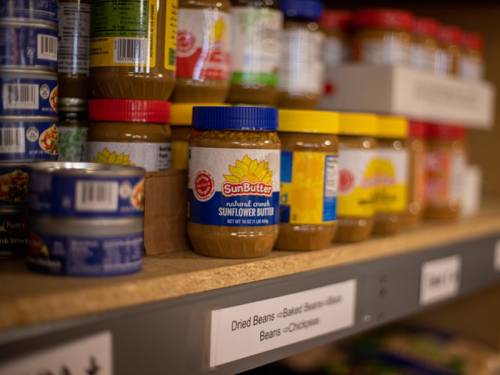 Photo by Aaron Doucett via Unsplash

Representatives from BeLoved Asheville, Forest Hill Presbyterian Church and Second Presbyterian Church told stories of how they’re living out what Jesus told his disciples just before the feeding of more than 5,000 people: “You give them something to eat.”

Paul Jennings said Forest Hill’s ministry began during the 2008-09 Great Recession with a garden at the church, which is about eight miles east of Cleveland. “That got lots of people involved,” Jennings said, “but we found we could provide only 1,000 pounds of food per year.”

The church then partnered with the Greater Cleveland Food Bank to open a pantry, “which picked up steam and has grown each year,” Jennings said. Forest Hill Church now distributes nearly one million pounds of food annually to more than 560 families each month.

The church also serves a monthly hot meal “to try to get to know people, which has become a whole ministry in itself,” Jennings said. About half the volunteers preparing and serving the meal are people from the neighborhood; the other half are members of Forest Hill and other nearby churches.

“Every time we have a problem,” Jennings said, “we figure out a way to deal with it.”

The Rev. Ellie Stock discussed Second Presbyterian Church’s partnership with the Presbyterian Hunger Program’s Joining Hands initiative, which is helping in places including La Oroya in Peru, one of the world’s most polluted spots. “We listen to partners and accompany them as they discern what the issues are — particularly the environmental issues causing hunger,” Stock said.

A big focus is on economic development. St. Louis-area churches in the Presbytery of Giddings-Lovejoy have worked to create a fair-trade corridor with artisans living in Peru. Stock said St. Louis University recently came through with the first-ever independent health study in La Oroya, giving residents there “the credentials to go to the government” to help address the problems they face feeding their families.

The Rev. Amy Cantrell and Ponkho Bermejo, two of the co-directors of BeLoved Asheville, discussed putting love into action in their North Carolina community.

“Food is how you welcome people,” Bermejo said. “Food is the basis for the start of a relationship. It’s an excuse to bring people in.” He said he still adheres to a lesson his mother taught him: “You have to take care of your neighbor. If your neighbor is sick, you are sick.”

This moment in time, Cantrell said, “is a very holy hour to say, ‘We are at the base of building the kin-dom of God.’”

BeLoved Asheville’s community does more than break bread together, Cantrell said: they enjoy pupusas, cheese- and meat-filled thick tortillas from El Salvador, which Cantrell described as “cultural comfort food” passed from one generation to the next. “We’ve invited people to give so we can take pupusas to the streets,” Cantrell said.

As in other communities, Asheville officials have been breaking up homeless encampments, sometimes with very little notice. Cantrell reached a friend who works in City Hall — a man with “deep Christian faith,” Cantrell said — and told him, “You and I are going to be judged by this.”

“At the 11th hour,” Cantrell said, “we got a call saying they would move people into hotel rooms and asked us to help them move.”

BeLoved Asheville then asked the city to purchase that hotel, which it did.

“From a pupusa to buying a hotel started with the ancient wisdom of grandmothers,” Cantrell said, adding a friend had recently offered this aphorism: “Justice is good, but food is essential.”

“That sounds like the gospel to me,” Cantrell said.

The Rev. Dr. Diane Moffett told those gathered about her most recent call to ministry before becoming president and executive director of the Presbyterian Mission Agency in 2018. She served Saint James Presbyterian Church in Greensboro, North Carolina, where “hunger was an issue and it remains one today,” Moffett said.

Blessed with a social worker as part of the congregation, the church joined with Greensboro Urban Ministry and other churches “to make sure families had what they needed,” Moffett said.

Moffett even ran for mayor of Greensboro “because the city wasn’t paying enough attention to those on the margins,” she said. While dealing with Greensboro’s hunger problem, “we knew we couldn’t do it by ourselves,” Moffett said. “We had to do it by networking with other people.”

“Matthew 25 is a vision that fits us,” Moffett said. While it’s general enough to offer opportunities for ministry to a wide range of Presbyterian Church (U.S.A.) churches, “it’s specific enough for us to use in our own context,” Moffett said.

Moffett told one of the webinar’s breakout groups that she wonders “how we can begin to center the advocacy” that “really helps crack the back of the system, as we heard from our friends in Asheville. Issues have been eradicated in communities who have said, ‘We aren’t going to stand for this anymore.’ The heart of the people is to make a better community and build relationships.”

Later she wrapped up the 75-minute webinar with a prayer that included words of thanks that God has given people “the ways we are working to bring out your principles, your way of being. You have called us to be good news to people who are poor. They will determine — just as you will determine — whether we are good news or not.”

Watch the webinar here. Click on “Resources” and then “Recent Online Matthew 25 Events.”