Make A Donation Click Here >
Home › We are women farmers; we deserve more! 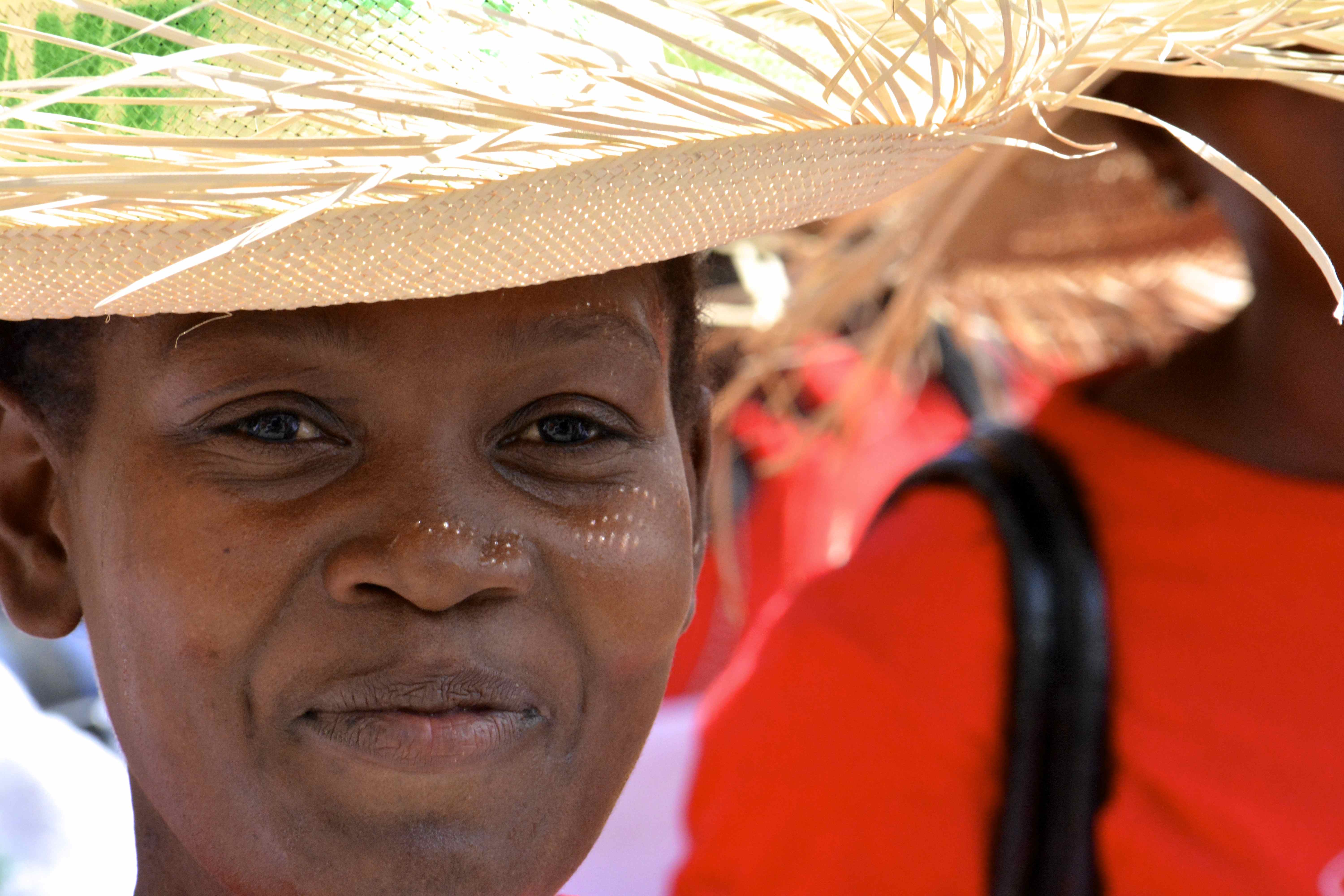 A woman marching for women’s rights in Jeremie, Haiti, on October 15, smiles as she walks. Photos Courtesy of Cindy Corell.

Shortly before noon on Tuesday, October 15, 2013, the streets of Jeremie, a small coastal city on the southern peninsula of Haiti in the Department of Grand Anse, turned bright red. A crowd of more than 1,000 women wearing red T-shirts and straw hats flooded the narrow road alongside the wharf and into the main part of town.

They chanted out for respect for women and carried a white banner that read: Nou menm fanm peyizan nou merite plis! – We are women farmers; we deserve more!

They were the women of Konbit Peyizan Grand Anse (KPGA), and they were on the move.

KPGA is one of the 11 organizations of FONDAMA, or Fondasyon Men-lan-Men Ayiti, the Joining Hands partner in Haiti.

One of the overarching missions of FONDAMA is to secure food sovereignty by promoting the benefits of family farming through Haiti. At the heart of this mission, and the programs to work toward it, is the desire to nurture and strengthen the role of women in agriculture.

Most, if not all, of the organizations that make up FONDAMA not only advocate for gender equality, but also, they rely on women for much of their work, and in Jeremie, KPGA is mostly comprised of women. KPGA’s companion group is OFTAG, or Oganizasyon Fanm Tet Ansanm Grandans, or the organization of women working together in Grand Anse. OFTAG sponsors women’s rights seminars and supports micro loan programs in many of its eight communities.

In 2007, the United Nations set aside Oct. 15 as the International Day of Rural Women, recognizing “the critical role and contribution of rural woman, including indigenous women, in enhancing agricultural and rural development, improving food security and eradicating rural poverty.”

The document delivered to the mayor of Jeremie included a comprehensive list of desired changes.

The women asked for:

If this sounds like a lot, it is. The needs of farmers in rural Haiti are vast, and for the women, they are even more urgent.

Times have changed in Haiti over the past 20 years. Education has for several decades been of utmost importance to families in Haiti, but it traditionally has been more important to send boys to school. Recent generations of parents, many of them women raising children alone, now want to educate their daughters as well as their sons. This desire not only requires additional funds, but it also means the mother has more work to do at home.

In August, I met with a group of women who participate in a micro credit program that is sponsored by KPGA and OFTAG and funded by Action Aid. The women live in Chadonette, one of those villages that’s at the top of a mountain only accessible by a sturdy vehicle. Or donkey. Or, as in the most common of local transport — feet.

About a dozen members of the 45-member group showed up to meet with me. They all have children, and they each had attended school, but none had finished. They rise at about 4 a.m., begin gathering their items for market, prepare breakfast for the family and get the children to school. Then they begin at least a two-hour walk to Jeremie. When they have enough for a larger market, they carry the items on a tap-tap, a form of public transportation in Haiti, in this case, a large truck that carries people and goods for long distances, to Jeremie.

The micro credit business has helped them buy more seeds. They plant more crops, which means more to harvest, more to carry to market and more funds for the family. 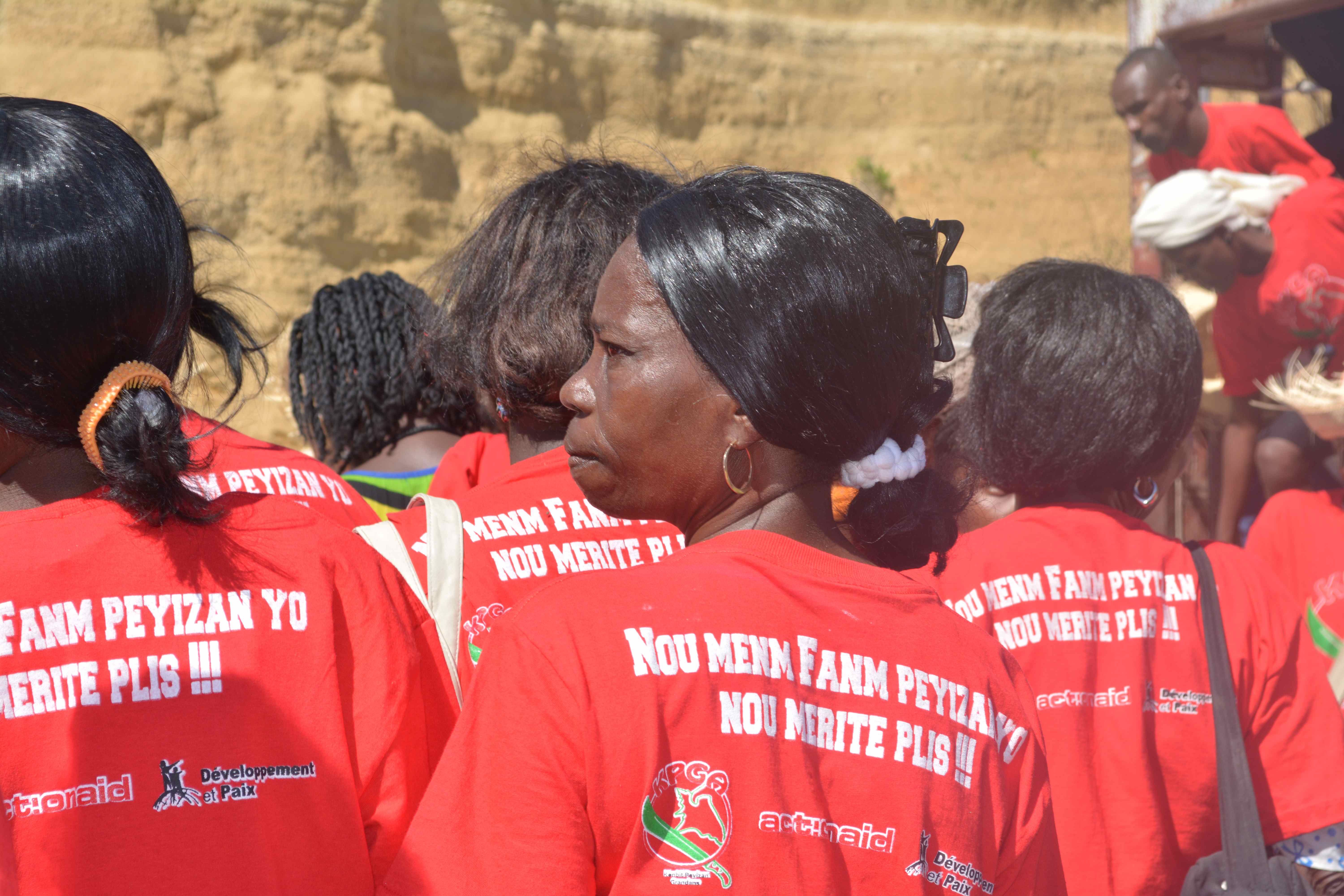 The slogan for the march was “Nou Menm Fanm Peyizan; Nou Merite Plis” which is Haitian Creole for “We are all farm women; We deserve more.”

Most of these women were in their 20s or 30s. They work harder than their mothers did, they say. When they were growing up in the 1980s and early ’90s, education was becoming more important, but more so for boys.

“My mother kept me at home to help her,” one woman said. “She made my brothers go to school.”

But like the others, she wants something different for her daughters.

“I didn’t go far in school,” she said. “But I make a lot of effort to push my daughters, to make them finish high school. I want them to become another kind of woman. I don’t want them to be like me.”

And so they work, these rural women. They work in the gardens, in the fields and they walk far to sell their goods.

The day I was in Chadonette with the women’s group, I asked a woman what her hope was for her daughter.

“I want her to finish school and become a nurse,” she said. “Or become a tailor. Or anything that she wants to be. I want her to be able to choose.”

These mothers’ dreams are universal. The members of KPGA, OFTAG and the other organizations within FONDAMA, by setting their own priorities and galvanizing for change, are already setting the groundwork for making these dreams a reality.

FONDAMA has the capacity to further these efforts by providing more training in leadership, advocacy and agricultural practices. The march on October 15th was a great success, shedding light on the region’s needs to strengthen the role of women in agriculture and society, both locally and regionally.

The next steps for FONDAMA could include advocacy trainings for the Grand Anse organizations, examining existing laws that impede women’s rights and opportunities and working to change those laws and the prevailing attitudes in Haiti’s government.

All those efforts will be greatly enhanced by the strong work already being carried out, especially by the women who — at the heart of it all — want a better future for themselves and future generations. 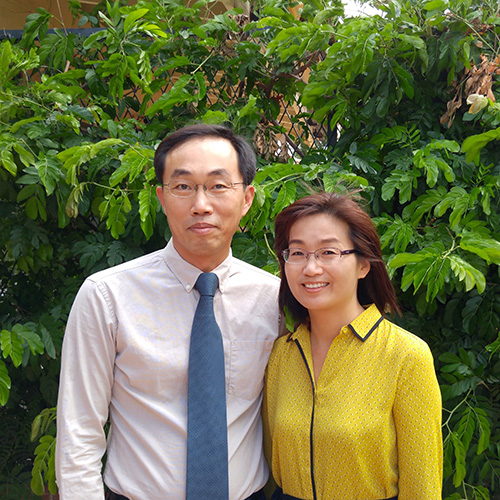