‘We have the power in our congregations’ 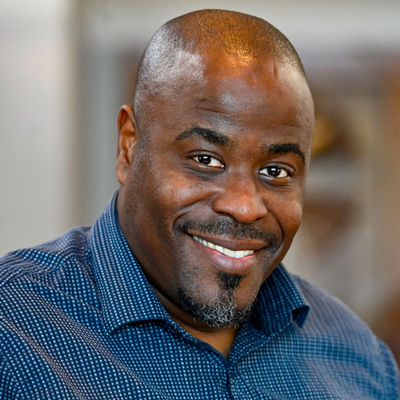 The Rev. Dr. Alonzo Johnson is coordinator of the Presbyterian Committee on the Self-Development of People. (Photo by Rich Copley)

LOUISVILLE — The Book of Isaiah helped to set the tone for a Presbyterian Week of Action program focused on the need to mobilize against systemic and racialized poverty.

The Rev. Dr. Alonzo Johnson, coordinator of the Presbyterian Committee on the Self-Development of People, read Isaiah 58:10-12, which says, “If you remove the yoke of oppression, the pointing of the finger, the speaking of evil, if you offer your food to the hungry and satisfy the needs of the afflicted, then your light shall rise in the darkness and your gloom be like the noonday. You shall raise up the foundations of many generations; you shall be called the repairer of the breach, the restorer of streets to live in.”

The reading was part of a program, featuring representatives of the Compassion, Peace and Justice ministries of the Presbyterian Mission Agency and the national Poor People’s Campaign, that combined worship with calls to become advocates for social justice.

“We are called to be messengers of hope, to bring the good news as Christ has done, and we can do that ‘cause we have the power in our congregations,” Johnson said.

One way to exercise that power is to reach out to the people who make public policy, said Christian Brooks, Representative for Domestic Issues for the Presbyterian Office of Public Witness.

“We have to change the policies that are making the system what it is,” Brooks said during the program. “So how do we change those policies? … We have to start talking to our elected officials on state, local and federal levels.” 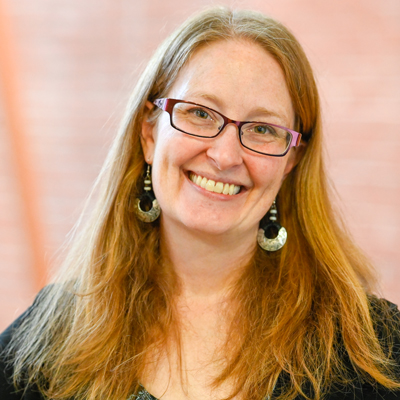 The Rev. Rebecca Barnes is coordinator of the Presbyterian Hunger Program. (photo by Rich Copley)

The service was designed to “connect our faith and discipleship to ways God calls us to act to address racialized poverty,” Barnes said prior to the program.

Theoharis said some people see demands for human rights and human dignity to be unreasonable, and even sometimes quote the Bible to back up that notion.

But beginning with Genesis and throughout the New Testament, there’s “a constant revelation of God’s will that no one should be made hungry or sick or homeless or underpaid or indebted or bereft by the violence of racial and social injustice,” said Theoharis, director of the Kairos Center for Religions, Rights and Social Justice at Union Theological Seminary. “In that Bible, there’s an ongoing indictment of those who would take and would keep the wealth of our world for themselves and cause others to suffer.”

Theoharis also said she hears the biblical command in Luke 1 to fill the hungry with good things “not simply as caring for the poor as an end result but building a movement advocating for policies and structures that actually lift the load of poverty, admonishing nations to do no wrong to the immigrant, to the homeless, to the children, and do not shed innocent blood, as Jeremiah reminds us in Chapter 22.” 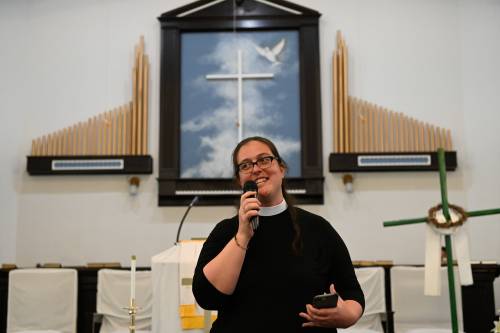 The Rev. Dr. Liz Theoharis is the co-chair of the Poor People’s Campaign and the director of the Kairos Center for Religions, Rights and Social Justice at Union Theological Seminary. (Photo by Rich Copley)

“We live in the richest country in the world, at the richest moment in human history, and yet there are 140 million people who are poor, or one health care crisis, job loss, extreme storm, or small emergency from economic ruin,” she said. “We live in a world that is made of two-thirds water and yet 15 million families can’t afford water. In this country alone, 62 million workers are making less than a living wage. And yet, we have not seen a wage increase in decades.”

In separate remarks, Martin spoke of institutions, regulations, laws and discriminatory acts being used to pit people against each other. “Whether through the belief system, race, housing, health, political power, religion, these systems are impacting and weaponized to impact the poor,” she said.

Like Theoharis, she also spoke of the need for activism: “In these dangerous times and uncertain times, we need each other to step up and step in to bring this message of justice, love and hope to our homeless encampments, our courts, our prisons,” she said. “Our struggles must be waged in the streets.”

She added, “It takes dedication in responding to God’s call to create beloved community by dismantling white supremacy culture and whiteness” through collective work.

“Shades of Oppression, Resistance and Liberation” is the theme of the 2021 Week of Action, which continues through Sunday, Aug. 29. It’s a denominaton-wide effort to bring attention and action to people and communities living under different forms of oppression.

Now in its second year, the Week of Action is a response to the PC(USA)’s Matthew 25 invitation and Hands & Feet initiative and each day has a different emphasis. Tuesday had two, including one focused on the Hispanic-Latinx community and the other on poverty.

Eradicating poverty is one of the main foci of the Matthew 25 invitation, which answers Christ’s urgent call to be a church of action, where God’s love, justice and mercy shine forth and are contagious. The other foci are building congregational vitality and dismantling structural racism.

During Tuesday’s program, resources were posted on the screen to encourage congregations and other viewers to get involved in advocacy, such as the work of the Poor People’s Campaign and Action Alerts by the Presbyterian Office of the Public Witness. (The recording can be found here, and a collection of resources can be found on the Week of Action website.)

The program concluded with words of encouragement and prayers by Johnson and Brooks about the need to keep moving forward, even in the face of adversity.

Brooks prayed, “God, strengthen our backs like Fannie Lou Hamer, who declared sometimes it seems like to tell the truth today is to run the risk of being killed. But if I fall, I’ll fall 5 ft. 4-inches forward in the fight for freedom. I’m not backing off.”