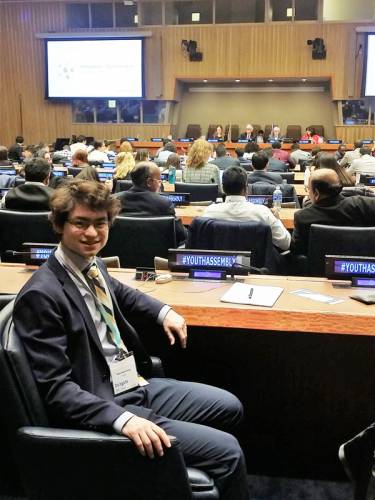 LOUISVILLE — The Presbyterian Peacemaking Program’s Season of Peace has been enhanced this year by artists with something to say — or sing, or paint, or even throw, such as pottery — and it was Simon Doong’s task on Monday to discuss the impact artists are having on Presbyterians subscribing to the Season of Peace videos and spoken word.

The four-week Season of Peace pilgrimage began Sept. 5 and will come to an end on Oct. 3. Subscribe to daily reflections here.

Doong, Peacemaking’s project manager and a co-host of A Matter of Faith: A Presby Podcast, was the guest Monday of Between Two Pulpits, aired by Special Offerings at 1 p.m. Eastern Time each Monday via Facebook Live. Watch Monday’s episode here.

The first week of Season of Peace was given to peacemakers offering up spoken and written word presentations. This week, song, music and dance have taken center stage. On Monday, for example, Presbyterian writer, speaker and musician David LaMotte took a turn to talk about how music is inherently connectional. Hear from LaMotte, part of the band Abraham Jam — a Muslim, a Jew and a Christian — by clicking  here.

On Between Two Pulpits, Doong recalled an experience he had as a Young Adult Volunteer during 2016-17 in South Korea, where he met peace activists protesting construction of a naval base. The base had been constructed, despite their protest. Doong wondered: Why do you keep going?

“It’s easy to become disheartened,” they told him. “But when we do our song and dance, that gives us the motivation to keep going.”

“It’s a statement about the power of art in peacemaking,” Doong told Between Two Pulpits hosts Bryce Wiebe and Lauren Rogers. “That’s a through line in what we are doing” during the Season of Peace.

“I can’t wait,” Doong said, “for folks to learn from these amazing peacemakers.”

A video on the Korean protestors’ peacemaking efforts is set to go out to Season of Peace subscribers on Wednesday, with a written reflection Thursday. Read that reflection by downloading it here.

Doong and the Rev. Lee Catoe, co-hosts of “A Matter of Faith: A Presby Podcast,” have now completed 28 episodes. The format includes the two hosts responding to listeners’ questions around faith, social justice and church life. “If it matters to you, it matters to us,” Doong said of that segment of each podcast. They then bring in a guest who can “let listeners know about resources and opportunities they might not be aware of.”

“We jump into light topics as well, all related to faith,” Doong said. Doong and Catoe are careful to provide responses and not answers. “If you don’t agree, that’s just fine,” Doong said. “There is so much value in that, especially around issues of faith outside of church.”

If he were preaching on the lectionary passages this week, Doong would choose Mark 9:30-37, where Jesus tells the disciples that if they want to be first, they must be last and the servant of all — and that by welcoming children, they welcome Jesus. Doong sees echoes of Jesus’ words today as people of faith and others welcome those who have fled Afghanistan.

“That story is so apt for those seeking shelter, escape, welcome and hospitality,” Doong said. Immigration and migration are “core parts of who we are as Presbyterians and peacemakers.”

Doong said that all the people he encountered during his YAV year were “so nice, so welcoming and hospitable to me. What do we offer to people feeling desperate and alone? That’s exactly what people of faith have to offer. If the church doesn’t offer that, I’m not sure who will.”

With help from Doong and others, Special Offerings invites congregations thinking about places to help with their 25% of the Peace & Global Witness Offering to consider supporting our Afghan and Haitian siblings. Learn more here.

Doong also offered a brief update on the International Peacemakers program to be held online this fall. Six past peacemakers from places including Haiti and South Sudan have been interviewed; all six interviews will be available here. “They are timely and informative,” Doong said of each of the half-dozen interviews.

When Rogers asked the customary question to end their time together on Between Two Pulpits — What is your hope for the future of the church? — Doong was ready with a succinct answer.

“My hope for the future of the church,” Doong said, “is that it be inclusive, hospitable, welcoming to all — and not be afraid to change.”