Support disaster response this hurricane season, GIVE NOW
Make A Donation Click Here >
Home › Then and now: Living in a time of pandemic

LOUISVILLE — As Presbyterian Church (U.S.A.) congregations commemorated Reformation Sunday — remembering when Martin Luther posted his 95 theses for reform on a church door in Wittenberg, Germany, in 1517 — their thoughts turned to Swiss reformer Ulrich Zwingli and the worldwide COVID-19 pandemic that has killed nearly 250,000 Americans. 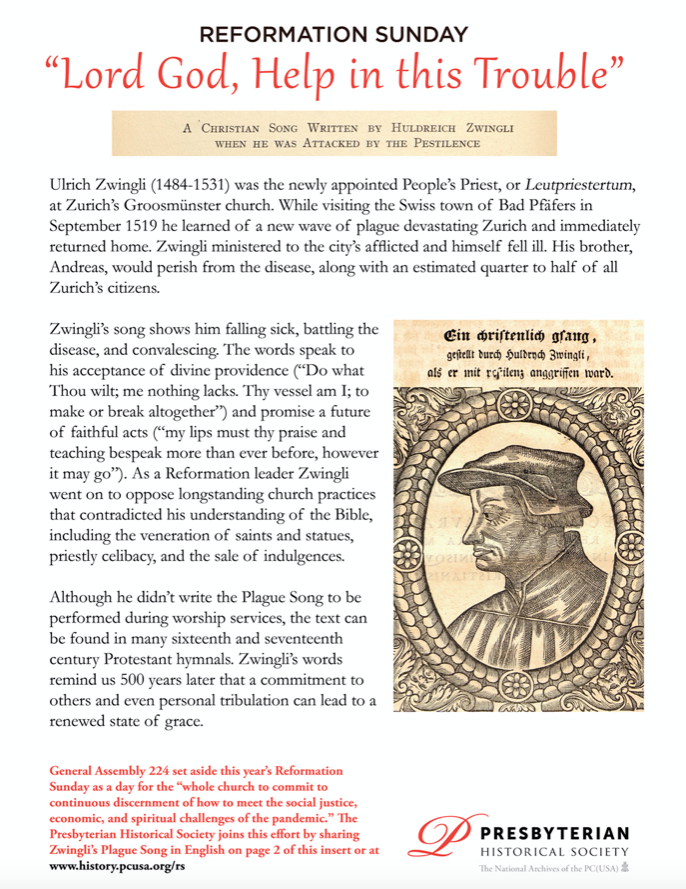 This year’s bulletin insert for Reformation Sunday, provided by the Presbyterian Historical Society, focused on Zwingli’s “Plague Song.” The insert was in response to the 224th General Assembly’s (2020) call to set aside the day for the “whole Church to commit to continuous discernment on how to meet the social justice, economic and spiritual challenges of the pandemic.” 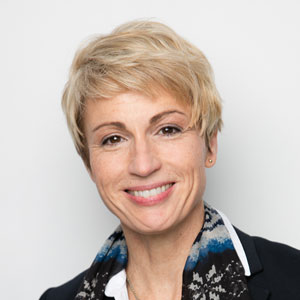 According to the Rev. Catherine McMillan, a minister of the Reformed Church of Zürich in Switzerland, Zwingli took his post as the people’s priest on Jan. 1, 1519 — seven months before bubonic plague fell over Zürich, eventually killing a third of the city’s 7,000 residents. Before the plague, McMillan said, Zwingli was hard at work interpreting the Gospel of Matthew in the language of the people — and using his influence with those holding political office to expose corruption and end the practice of sending mercenary troops to fight in foreign wars for money.

Out of town when the plague hit, Zwingli rushed back to Zürich to pray with people, offer comfort and bury the dead. The other clergy had left town, along with all who could afford it.  Zwingli caught the plague within weeks and was sick for almost a year. Seeing how the poor were hit the worst sharpened his sense for social injustice, and he found that the Old and New Testaments never tired of taking up the cause of the poor and oppressed. Once he recovered, he started working on plans for the city council to set up a health-care system and a hospital.

“He helped found the first welfare system in the world in Zürich in 1525, using funds from the monasteries that had been closed in 1524, when the Reformation had its breakthrough here,” McMillan said.

As a humanist, Zwingli had an optimistic view that people would see the light of reason and what the true gospel was about when they heard the Bible explained or learned to read it themselves. But McMillan said his experience with the plague forced him to confront forces he was unable to control with his intellect or talent.

“He realized the forces of selfishness, greed and ignorance in human nature were very strong,” she said. “To him, the plague stood for the evil forces that obscure the gospel and hinder the Reformation.”

As the pope, cardinals and bishops lined their own pockets with money from the indulgences and the masses and other sacraments that had to be paid for, McMillan said Zwingli saw at a deeper level how these practices manipulated the fear of the people, creating insecurity, fear, anxiety and dependency, instead of bringing comfort and strength.

As a result, Matthew 11:28–30 became one of his favorite Bible passages — and he would constantly tell the people that Christ came to take up their burdens and their fears.

McMillan — an ambassador for the Reformation’s 500th anniversary celebration from 2017–19 — said Zwingli also prayed, “I am your vessel. Make me whole or break me.” In July 1520, after his recovery, he wrote a letter to a friend saying, “I just pray to Christ that he will grant me one thing — to be able to bear it all with a courageous heart. May He break me his vessel or make me strong, whichever He please.”

“He’d gone from being an optimistic humanist to a humble and impassioned disciple and witness to Christ,” McMillan said.

Calling Zwingli “a very accomplished poet and composer,” McMillan said the composition for the “Plague Song” is in four-part harmony — adding that “it’s not really a hymn, but more of a spiritual solo-song, like the courtly love songs of the middle ages.”

There are three movements in the song. In part one, Zwingli feels death knocking and calls on Christ to defend him. In part two, he accepts death, saying that everyone who sets his heart’s desire and hope in Christ realizes that loss and gain are the same. In part three, he’s getting well, which McMillan said is like “a new birth” for him.

“At the end, he says that he will bear trials and persecution of this world joyfully with God’s help,” she said. “He came close to death. Now he has lost his fear of it and is willing to risk it all for God’s work of reconciliation, mercy and justice.”