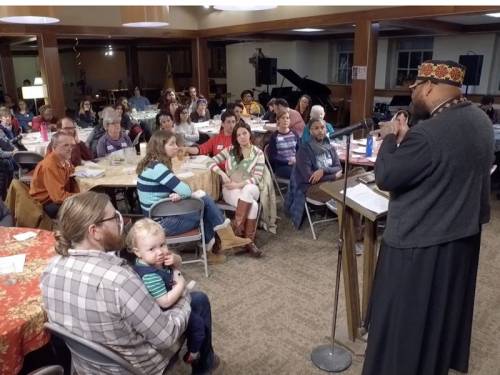 KANSAS CITY, Mo. —  As an actively anti-racist church organizer of The Open Table KC, Nick Pickrell says it’s important for the 1001 new worshiping community he founded to bring in “more people of color than white folks” to speak during their twice-per -month Sunday night gatherings.

“I wanted to have a church that actually talks at length about the systems that are oppressing so many,” he says. “Because that’s what I see Jesus having done his entire ministry on Earth.”

As The Open Table meets around the dinner table and talks about faith and spirituality — and the ways that culture and politics intersect with those — attendees are taught about what their neighbors need.

“This allows us to partner with our community to meet those needs,” says The Open Table KC co-curator Wendie Brockhaus.

Which is what The Open Table’s partner congregation, Second Presbyterian Church in Kansas City, Mo., was hoping for when the church put out a job description for a local missionary.  The church wanted someone to be part of the community to help re-engage with the neighborhood in new ways.

They ended up hiring Pickrell, in part because of his experience as with the Catholic Worker Movement.

“Theologically we’re in a very similar place,” says Second Presbyterian Church’s pastor, The Rev. Paul Rock. “What we were wanting to do at Second and what 1001 (New Worshiping Communities) was doing meshed.”

For Pickrell, the partnership between The Open Table and Second Presbyterian, which allows both to share space and swap ideas, has been “unbelievably fantastic.”

It’s been great for Second Presbyterian Church, as well.  According to Rock, one of the things that has impacted Second Presbyterian the most “is seeing people coming into our doors or hanging outside the church” who “haven’t been seen around here before.”

“They’re coming to engage in a number of things that are affecting our community,” he says.   “And almost to a ‘T’ they’re pleasantly surprised at the fact that we are a church.”

For Rock, The Open Table’s gatherings with such a diverse community is life-giving.  On Sunday night he finds that he’d rather come and do dishes and just look out at the community and listen to the conversations.

Sometimes Brockhaus finds herself looking out over the room too — and that’s when it occurs to her that she is seeing the gospel happening right before her eyes.

Both The Open Table KC and Second Presbyterian are grateful for the ways the Presbyterian Church (U.S.A.) and specifically the 1001 new worshiping communities movement has allowed   them to thrive.

“It’s been a fantastic kind of symbiotic relationship between our church and 1001,” says Rock.  “The support, the funding, the coaching, the assessments they have provided have been fantastic.”

The Open Table has received Mission Program Grants, which are made available through the Racial Equity & Women’s Intercultural Ministries of the Presbyterian Mission Agency.  These grants support new worshiping communities’ and mid councils’ work to transform existing churches.