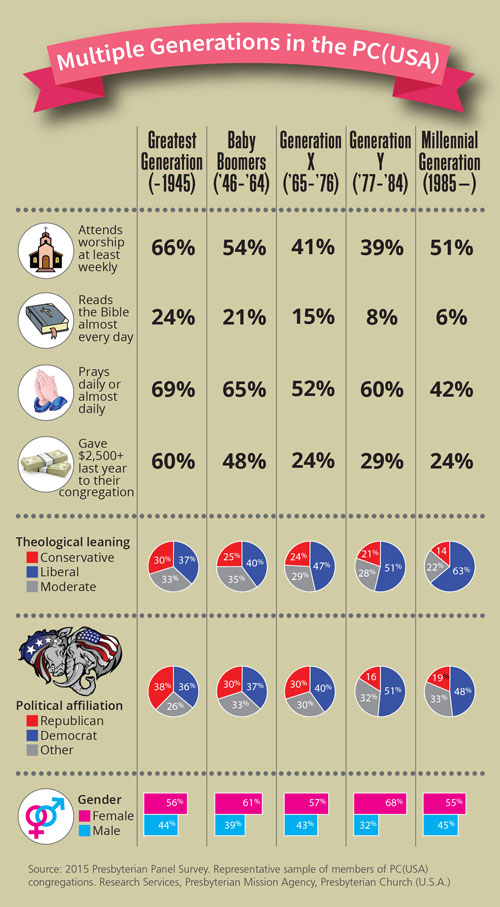 Does coming of age in a particular era decisively shape people’s values, habits and personalities?

Yes, say some analysts. They argue, for example, that the “Greatest Generation” — Americans who grew up during the Great Depression, World War II and the Korean War — is known for being loyal, hardworking and disciplined. Other generations have been influenced by times of economic affluence, stock market crashes and wars.

Generational characteristics influence religious and political differences among Presbyterians Greatest Generation Presbyterians attend worship, pray and read the Bible more regularly than other generations. They also donate more money and are more likely to identify as theologically conservative and Republican, especially when compared with Generation Y and Millennial Presbyterians.

There’s evidence, moreover, that the higher religiosity in older Presbyterians does not occur because they become more devoted as they grow older. Accounting for inflation, giving among the oldest generation hasn’t changed. The percentage of Greatest Generation Presbyterians giving more than $2,500 to their congregations is the same today as it was 20 years ago. In other words, giving did not increase as they grew older. Likewise, the percentage of Baby Boomer Presbyterians who pray daily or almost daily is about the same today as it was 10 years ago.

Perry Chang is a research associate with Research Services for the Presbyterian Mission Agency. This article originally appeared in the January/February 2017 issue of Presbyterians Today.