During Black History Month, Bending the Moral Arc leaders will share how their lives have changed 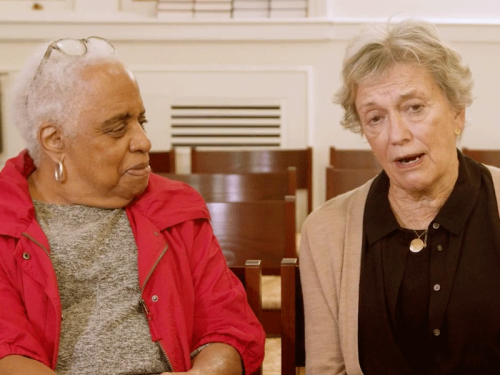 The lives of Barbara Flythe, left, and Pam Wakefield have changed as a result of conversations around Bending the Moral Arc. (Photo by Mike Fitzer)

LOUISVILLE — To enhance learning and the celebration of Black History Month, leaders from Bending the Moral Arc: Courageous Conversations on Race & Justice will take a deep dive into the issues of structural racism.

Barbara Flythe of Witherspoon Street Presbyterian Church and Pam Wakefield of Nassau Presbyterian Church in Princeton, New Jersey, will share how the two churches — one predominately Black, the other primarily white — have come together to bend the moral arc toward justice.

That phrase was first used by Theodore Parker, an abolitionist minister in the 19th century, and more famously a century later by the Rev. Dr. Martin Luther King Jr.

The Witherspoon Street and Nassau churches, which are less than a mile apart, have a long history as PC(USA) congregations. In Nassau’s beginning in 1776 as the First Presbyterian Church of Princeton, enslaved and free Black Americans worshiped in segregated seating. In 1840 they formed their own church on Witherspoon Street. 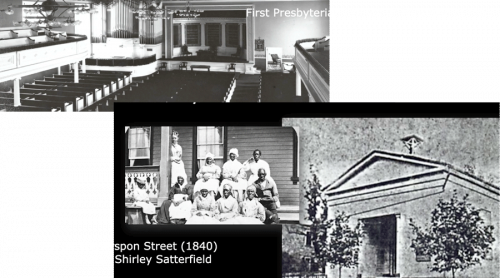 Enslaved and free Black Americans worshiped in segregated seating in the balcony at First Presbyterian Church of Princeton before forming their own church on Witherspoon Street. (Contributed photos)

“A group of us began to meet regularly,” Wakefield said. “But we really shifted gears right after George Floyd died.”

Conversations that once had been relatively easy to have suddenly became more difficult. Flythe couldn’t deal with her feelings of pain and anger, but she recognized everyone felt the same way.

Out of that recognition, Witherspoon Street and Nassau launched Bending the Moral Arc conversations in which two groups with equal membership from each congregation met weekly to talk about race and social justice.

Wakefield and Flythe will discuss how the conversations have changed their lives and deepened their friendship, which they hope will encourage others to create similar conversations in their context. They have come to believe together what King prophetically wrote about in his final book, “Where Do We Go From Here: Chaos or Community?”

“In a multiracial society no group can make it alone. It is a myth to believe that the Irish, the Italians and the Jews — the ethnic groups that Black Power advocates cite as justification for their views — rose to power through separatism. It is true that they stuck together. But their group unity was always enlarged by joining alliances with other groups, such as political machines and trade unions.  To succeed in a pluralistic society, and an often hostile one at that, the Negro obviously needs organized strength, but that strength will only be effective when it is consolidated through constructive alliances with the minority group.

“It would be neither true nor honest to say that the Negro’s status is what it is because he is innately inferior or because he is basically lazy and listless or because he has not sought to lift himself by his own bootstraps. To find the origins of the Negro problem we must turn to the white man’s problem. As Earl Conrad said in [his] book, ‘The Invention of the Negro’: ‘I have sought out these new routes in the unshakable convention that questions involved there cannot be and never could be answered merely by explaining the Negro himself, his ghettos, his history, his personality, his culture. For the answer to how the Nego’s status came to be … does not lie essentially in the world of the Negro, but in the world of the white.’  In short, white America must assume the guilt for the Black man’s inferior status.”

Look for the Presbyterian News Service’s conversation with Flythe and Wakefield on Bending the Moral Arc in early February.

You can download this Bending the Moral Arc small group manual  to help you begin conversations about creating  race and justice ministries in your own communities. It was produced through a partnership among Witherspoon Street Presbyterian Church, Nassau Presbyterian Church and Theology, Formation & Evangelism in the Presbyterian Mission Agency.