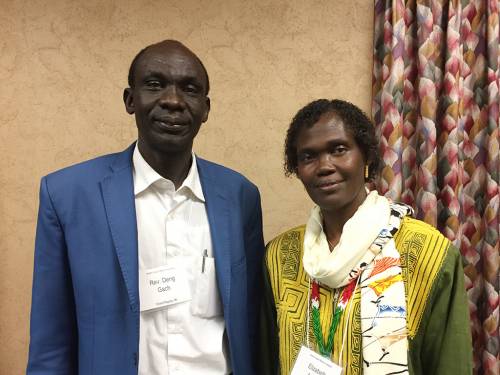 LOUISVILLE – Nearly 30 members of the Presbyterian Sudan/South Sudan Mission Network met at Law’s Lodge October 3 and 4 on the campus of Louisville Presbyterian Theological Seminary to discuss the Network’s ministry and strategies for ongoing engagement as the region experiences instability and leadership challenges.

The Rev. Debbie Braaksma, Africa area coordinator for World Mission at the Presbyterian Church (U.S.A.), provided an orientation to new members of the Network as well as an overview of the group’s work that focuses on areas of relief, education, teacher training, women’s concerns and reconciliation.

Speaking to the work of trauma healing Braaksma said, “When we talk about trauma healing, it’s a process. Forgiveness, reconciliation—getting out of the cycle of being hurt and wanting to hurt someone.”

Guests from the region included the Rev. Deng Gach, president of the Western Gambella (Ethiopia) Bethel Synod of Mekane Yesus Church, and Elizabeth Aluk Andrea, now of Winnipeg, Manitoba in Canada, who works specifically with women’s concerns in South Sudan.

Born in South Sudan, Gach’s family moved to Ethiopia in the 1970s. His synod oversees 12 presbyteries with 138 congregations and approximately 120,000 members. As the leadership struggles continue in South Sudan, he said the border with Gambela has become porous, and the state has received 400,000 refugees since the country became an independent state on July 9, 2011.

“[Our] church is providing the things the U.N. cannot,” said Deng of their work in four refugee camps. “It’s difficult to serve [in the refugee camps]. They don’t trust the [ethnic] Nuer who are living in Ethiopia, they think they are part of the government. Rumors spread that people from the church, who were coming to deliver Bibles, had actually been sent to bribe the refugees against the government.”

Speaking to the complexity of the conflict in which ethnic prejudices play as large a role as political differences, Deng gave the example of the church’s role in caring for 99 rescued children of 125 kidnapped by ethnic Murle.

“Most of the parents were killed so the church tried to help resettle and counsel the children, in partnership with the government,” he said, noting church members raised the equivalent of $10,000 to care for these children. “It’s difficult to remove all this trauma. [The children] don’t trust them. If we want real peace we need to overcome mistrust and ethnic bias. If we are not able to solve this problem, we fear it will spread to other areas including Ethiopia.”

Andrea recently returned from a trip to South Sudan with a group of young women advocates. Born in Lakes State in central South Sudan, she said decades of conflict and division have caused people to become vengeful and commit atrocities such as mass killings, kidnappings, gang rape and torture that would not have existed without the callousness of war.

“This is not the life, and this is not the way we used to be,” she said. “We are traumatized because we are a long time at war. What happened? We should live in peace so we can grow and progress.”

Saying she has experienced trauma from hearing news of loved ones still in South Sudan, Andrea believes women and girls in the country are bearing the brunt of ongoing trauma.

“The South Sudanese woman is suffering,” she said. “She is the one losing her husband to fighting, her sons to war and her daughters to early marriage. Even though there are South Sudanese in the U.S. and Canada experiencing peace, there is no peace in South Sudan.”

The presbyteries of Trinity, Pittsburgh, Redstone and Shenango provided updates on their regional networks, noting challenges in gaining new members and funding mission efforts. Members discussed how replace lost members and keep the team vital along with asking how to “recruit and keep alive the passion that makes this network possible?”

The Rev. Hunter Farrell, director of World Mission at the PC(USA) joined the group by Skype, thanking them for their work that began in 1994 and issued challenge to support the work of the Presbyterian Church of South Sudan (PCOSS). “There nothing better we can do to make a difference in South Sudan,” he said. “In Maslow’s hierarchy of needs people generally wouldn’t be thinking about education. But PCOSS people are thinking ahead and working together for their future with Presbyterians in the U.S. Their being willing to get this off the ground has been a great encouragement to me.”

Also joining the group via Skype was the Rev. Doug Mitchell, Westminster Presbyterian Church (Minneapolis) Associate Pastor for Faith in Action. Saying the church had dedicated $1 million to South Sudan mission—a portion of the $7 million set aside for mission from a recent capital campaign—he noted 50 percent had been disbursed and the remaining $500,000 is to be distributed as a challenge grant.

A report on mission co-workers in the region noted the Revs. Nancy and Shelvis Smith-Mather, who work with the South Sudan Education and Peace Building Project and RECONCILE, were on itineration assignment, along with Lynn and Sharon Kandel, when fighting broke out this July. The Kandels have recently returned to Juba and the Smith Mathers are on parental leave, looking forward to joining their South Sudanese partners in January. Leisa Wagstaff, who was evacuated to Kenya during the fighting, emailed Braaksma during the meeting to say she’d received her visa and would return to South Sudan within the week. 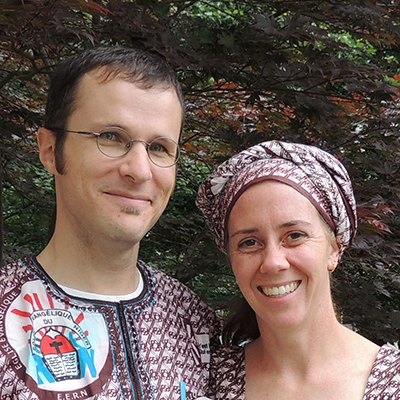