Nancy and Shelvis periodically visit the US and are available to speak as their schedule permits.  Email them to extend an invitation to visit your congregation or organization.

About Shelvis and Nancy Smith-Mather’s ministry

Shelvis and Nancy joined the ministry of RECONCILE International in 2011. Created by the New Sudan Council of Churches, RECONCILE is a Christian organization that seeks to bring peace and healing to communities broken and hurting from decades of war. Shelvis serves as the principal of RECONCILE’s three-month Peace Institute (RPI). RPI gathers faith and community leaders from around the country and strengthens their skills in resolving conflicts and recovering from trauma. Witnessing leaders who are often of rival ethnic groups live together in the dormitory, share meals, listen to one another’s stories, and build friendships is awe-inspiring.

In 2014, Nancy’s role with RECONCILE expanded to include managing a project with three additional PC(USA) global partners: the Presbyterian Church of South Sudan (PCOSS), Across, and the Yei Teacher Training College. The South Sudan Education and Peacebuilding Project is a five-year, collaborative effort to address a gap in educational development caused by years of conflict. When the moderator of the PCOSS explains the importance of education, he shares about the first Presbyterian missionaries who came to Sudan: “Wherever (the missionaries) go, first, they build for themselves where they can sleep. Second, they build the church. Third, they build the school and the hospital. The school and the hospital are for the local community.” He believes that holistic ministry, started by the early missionaries, remains essential to the life of the church today.

from a rich diversity of ethnic, linguistic and cultural backgrounds. Christianity and African indigenous religions are the most commonly practiced faiths, followed by Islam. The PC(USA)’s partnership with the South Sudanese church spans over 100 years.

In early 2011, the people of South Sudan voted to separate from the Khartoum-based government of Sudan and form an independent country. The referendum was part of a 2005 peace accord that ended decades of civil war between rebels in the South and government forces from the North. Years of war stole opportunities for development, including educational development. Consequently, only 10 percent of children complete primary school, and the drop-out rate for girls is the highest in the world.

While great hope and expectation accompanied the birth of South Sudan, great disappointment and heartache followed when the new country descended into civil war in 2013. Nevertheless, God is at work in South Sudan. Many local churches are deeply committed to building peace, to healing emotional wounds from trauma and to bringing development.

About Shelvis and Nancy Smith-Mather

Shelvis and Nancy Smith-Mather feel called to join South Sudan’s churches in building a better future for the country.

“‘Those who break the chain of resentment, retaliation, violence, and hostility are people who take away the sins of the world,’ said Neville War, and I cannot think of a better quotation to describe the Christian leaders with whom we work in South Sudan,” Nancy says. “Our South Sudanese partners are incredible in their perseverance, faith and courage. With Christ’s power, they are helping people heal, reconcile and become peacemakers. We feel humbled to work alongside them and learn from them.”

Shelvis notes that people facing extreme conflict turn to the church to find “something greater, a more profound reality than they experience on a day-to-day basis.”

“I am eager to participate in efforts that exemplify the ‘greater call’ of the church in the world,” he says. “The opportunity to serve as a mission co-worker, more specifically as the principal of the RECONCILE Peace Institute, grants me an opportunity to join in the work of my South Sudanese sisters and brothers as they labor towards transformation during a difficult time.”

Shelvis and Nancy, who are both ordained PC(USA)ministers from the Greater Atlanta Presbytery, were married and took their first ordained calls in Africa. They were assigned to Kenya in 2008 with the PC(USA) Young Adult Volunteer (YAV) program and signed up for an additional year after their initial one-year appointments ended. Both were able to experience Africa beyond the borders of Kenya, which helped them develop relationships and then a love for the people of South Sudan.

In 2012, the Smith-Mathers’ son, Jordan, became the first child born in South Sudan to US born parents. Jordan and his younger sisters Adalyn (2014) and Nicole (2016) received South Sudanese names from elders in their community.  In many parts of the country, it is the elders who name children. Jordan’s name, “Yopay,” is given to a child who is born early, as he was born prematurely. Adalyn’s name, “Keji,” means “home” and was given to her to let the Smith-Mather family know they are welcome in South Sudan. “Nyepal” means “prayer” and was given to Nicole by a South Sudanese pastor who told the family that many in East Africa were praying for Nicole’s healing when she was sick after she was born in the US.

Both Shelvis and Nancy grew up in Atlanta and attended high school, college and seminary together. They are graduates of The Westminster Schools in Atlanta; Furman University in Greenville, South Carolina; and Emory University’s Candler School of Theology.

The Smith-Mather family is humbled by the opportunity to be a part of building peace, fighting poverty through education, and restoring hope alongside the church in South Sudan. They realize they could not do so without family, friends and churches who pray, support and care for them as they serve the Lord in a distant place. Their hearts are filled with gratitude.

Watch a video of Shelvis and Nancy Smith-Mather 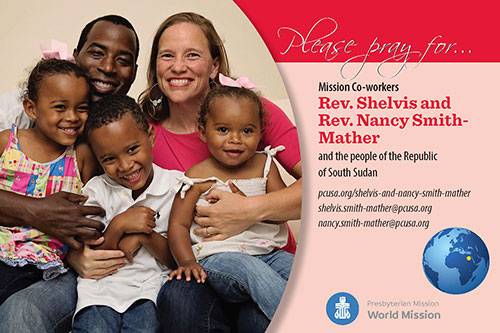 Tragically, after surviving decades of civil war and achieving independence, South Sudan continues to endure cycles of ethnic, political and resource-based conflict. This violence, however,…