Leisa occasionally returns to the U.S. to visit congregations. Email her to learn about her schedule and invite her to visit your ministry.

Leisa Wagstaff serves in South Sudan with the Presbyterian Church of South Sudan (PCOSS) in education and trauma-healing. This includes working alongside the PCOSS with South Sudanese refugee populations in Kenya, Ethiopia and Uganda who have been displaced because of the country’s continuing conflict. In her role as educational facilitator, Leisa serves South Sudan’s most vulnerable communities. She has helped the PCOSS’s school system establish a teacher-training program, develop logistical and curriculum plans, implement trauma-healing workshops for children and prepare teachers to lead workshops.

“I have been given the opportunity to help further proclaim the good news to all creation and use all of my educational training and experiences of working and living in Africa as I serve alongside the Presbyterian Church of South Sudan,” Leisa said. “The majority of the adult population in South Sudan has no education due to the unrest, and 70 percent of children between the ages of 6 and 17 have never set foot inside a classroom. Recruitment of child soldiers, childhood marriage and gender-based violence are all factors contributing to the problem. Girls comprise only one-third of the country’s student population, and the dropout rate for girl students is among the highest in the world. The lack of funding for teacher salaries and basic teaching supplies, and the fact that only 12 percent of the teachers have been trained, further exacerbate lack of education among the South Sudanese.”

In early 2011, the people of South Sudan voted to separate from the rest of Sudan and form an independent country. The referendum was part of a 2005 peace accord that ended decades of civil war between rebels in the South and government forces from the North. However, just two years later, the country was engulfed by fighting when president Salva Kiir accused vice-president Riek Machar of attempting a failed coup. Government and rebels agreed to attend peace talks in Ethiopia in 2014, and a deal was finally signed under threat of UN sanctions against both sides in August 2015. An ongoing and increasingly brutal new wave of violence broke out in July of 2016 and has caused widespread famine. The conflict has displaced more than 3 million people.

Leisa works in a place that was instrumental in her call to mission. She made her first visit to what was then Sudan as a college student enrolled in a work-study travel program. Like many college students, she was drawn to overseas study because she desired adventure and wished to encounter new cultures while earning academic credit.

“Touching down in the Sudan, however, was the beginning of much more: a lifelong commitment to global mission that has taken me to wonderfully diverse communities where churches are growing at astonishing rates and Christians are sustaining their faith in the midst of innumerable socio-economic, political and climatic challenges, and, often, religious persecution,” Leisa said.

Leisa began her mission service through the Volunteer-in-Mission program as a headteacher at a school for children of missional personnel serving in the former Zaire. A decade later, she returned to the country after it became known as the Democratic Republic of Congo as an advisor and projects officer. Since her first experience in Africa, Leisa has served more than three decades in education and community development in Lesotho, Zimbabwe and Cameroon.

While thousands of miles separate Leisa from the Presbyterians in the United States who support her ministry, Leisa tells Presbyterian audiences back home that they are never far from her mind. She says, “I serve as your representative, your mission co-worker, and the embodiment of your desire to share the good news of Jesus Christ in every corner of the earth.”

Watch a video of Leisa Wagstaff 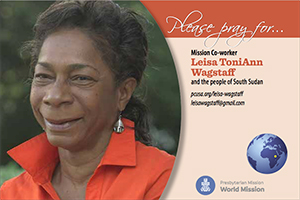 Use this card as you pray for mission co-worker Leisa Wagstaff. This card includes a photo and overview of her work. After nearly 30 years…

Give to the ministry of Leisa Wagstaff