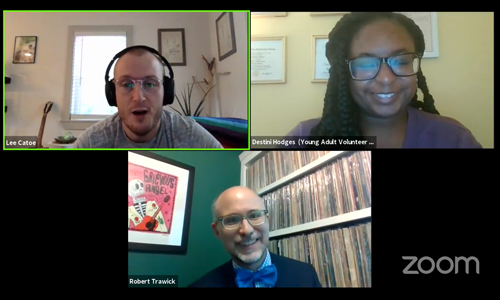 LEXINGTON, Kentucky — Though “Just Talk Live” is a conversational online talk show, participants sometimes do a little preaching — particularly if they have “the Rev.” as their courtesy title.

That happened twice Wednesday afternoon during a special General Assembly edition of the show focused on social witness policy.

Mission Responsibility Through Investment (MRTI) and the Advisory Committee on Social Witness Policy (ACSWP) are ministry areas that have seen most of their planned items for discussion at the current 224th General Assembly, which continues Friday and Saturday, deferred until the 225th GA in 2022 due to the limitations of the online format necessitated by the COVID-19 pandemic. Their leaders took some time to reflect on the situation and where some of the issues people are trying to bring before the assembly figure into its limited format and the massive issues facing the world. 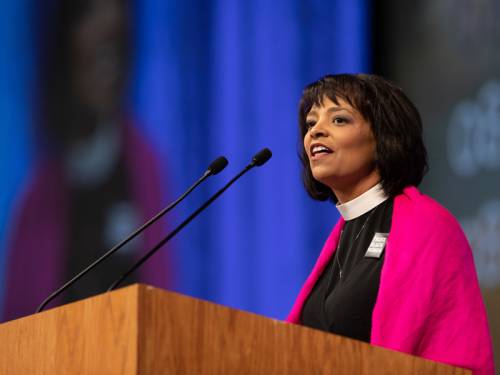 “This is where your ministry should be right now,” incoming-MRTI chair the Rev. Dr. Kerri Allen said, reflecting on Black and brown communities in cities such as Chicago and Detroit that are particularly vulnerable to COVID-19. “Your ministry should be with these people that are dying from COVID, with the people on the frontlines of climate change, with people advocating for racial equity, and on the streets, and that should be part of your ministry without any direction from the General Assembly, because that is the ministry of the Gospel of Jesus Christ.

“And so, if you’re not there, in the trenches and on the streets, standing alongside of all of the most vulnerable within our midst, then I have to question whether or not you are really preaching the Gospel of Jesus Christ … or if you’re engaging in clergy malpractice.”

While Allen and MRTI were disappointed that the committee’s recommendation to add three fossil fuel companies to the divestment/proscription list will not be taken up for another two years, she also acknowledged that the format of the assembly would make participation in discussions by some people in impacted communities impossible and discussion difficult.

“I’m hoping that we can table things until 2022, and that we will continue doing the work of creating justice and equity in all of our spaces we are called to,” Allen said.

The two representatives of the Advisory Committee on Social Witness policy who followed Allen also acknowledged the difficulties the current General Assembly faces, but were slightly less inclined to let some issues go. 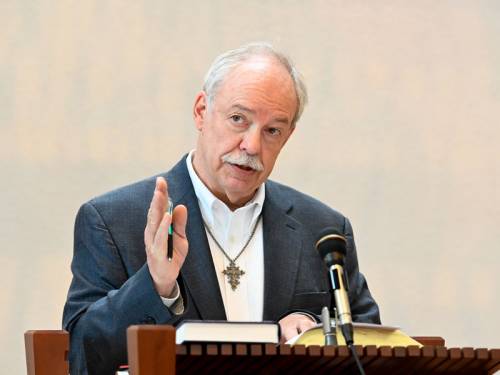 The Rev. Dr. Chris Iosso, the outgoing coordinator for the Advisory Committee on Social Witness policy, was the preacher during a Chapel service at the Presbyterian Center in Louisville, Ky. (Photo by Rich Copley)

“Does the church have something to say? Well it does, and it has,” outgoing ACSWP coordinator the Rev. Dr. Chris Iosso said, taking to the virtual pulpit. “Social witness is like preaching. We got a ton of good sermons. But you need something that’s live, that addresses the current struggle and gives air cover. … We need to say, in a sense, there is a legitimacy to the protest stuff, and it complements the policy work we do, and the preaching and the pastoral care. There is a whole ecology here of the church that is involved in the prophetic witness.”

In addition to immediate matters, longtime ACSWP committee member Robert Trawick allowed that he was “not as sanguine” as Allen about the deferred items.

“What was deemed as ‘essential business’ somewhat missed the boat,” he said. “Things that we have been working on are issues where time is of the essence.”

Those included Israel and Palestine — which was being discussed in another PC(USA) online program at the same time — and environmental issues.

“We have potentially lost an opportunity to speak when voices of the church need to be heard,” Trawick said.

One issue that Iosso and Trawick noted ACSWP had shifted on was divestment from fossil fuel companies. After concurring with MRTI for years that selective divestment was an effective route, they said they had come to favor more categorical divestment, advocated by groups such as Fossil Free PC(USA).

That group’s moderator, the Rev. abby mohaupt, was on Monday afternoon’s edition of “Just Talk Live” and said that while they understood MRTI’s position that continued investment allowed engagement with companies on environmental issues, Fossil Free believed there was no evidence that process worked.

Allen appeared to answer that misgiving Wednesday, noting that three of the nine companies the committee was following on its guideline metrics — General Motors, Ford, and Duke Energy — had agreed to adopt net-zero emissions goals by 2050.

“We have already seen where that type of international partnership that MRTI has been engaged with has actually made a difference,” Allen said.

MRTI’s report for GA did include the recommendation that three companies be added to the Assembly’s divestment/proscription list for non-engagement and/or responsiveness — Exxon, Marathon and Valero.

Toward the end of the hour, Catoe, who is part of ACSWP as the managing editor of the Unbound online journal and Associate for Young Adult Social Witness, pointed out that policy written by the Advisory Committee and others can be the basis for action and advocacy. Iosso, for instance, noted that ACSWP has been looking at the issue of police brutality for decades.

“For anybody who’s listening, any church member or minister, these two men and many others have had hands in writing policies that give you permission to have these conversations, to really do the work,” Catoe said, referring to Iosso and Trawick. “Because without the work being done, they’re just letters on a page.”

Mission Responsibility Through Investment and the Advisory Committee on Social Witness Policy are Compassion, Peace & Justice ministries of the Presbyterian Mission Agency.