Building a Life of Faith. Support the Pentecost Offering.
Make A Donation Click Here >
Home › Self-Development of People will engage with Atlanta at next meeting

Presbyterian committee will hold workshops and forums during September gathering 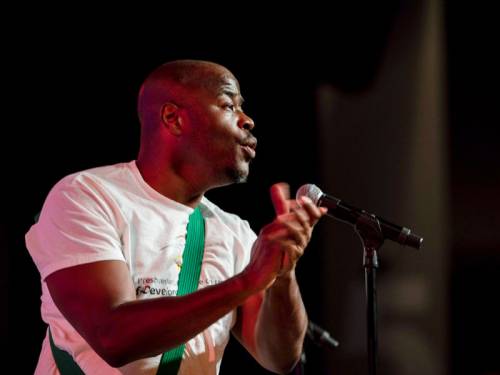 The Rev. Alonzo Johnson, coordinator of the Presbyterian Committee on the Self-Development of People, leads a teach-in while others march during a Public Witness event at the 223rd General Assembly held in St. Louis last year. (Photo by Michael Whitman)

LOUISVILLE — With its September meeting in Atlanta, the Presbyterian Committee on the Self-Development of People (SDOP) aims to get to know the Georgia capital and its surrounding communities better with a series of workshops and meetings.

“I’m excited about the Presbyterian Committee on the Self-Development of People engagement with the Greater Atlanta Presbytery,” SDOP coordinator Alonzo Johnson says. “I am also enthusiastic about SDOP engagement with congregations and communities in general.”

The Atlanta-area meeting Sept. 19-22 will include community engagement days with workshops about refugee care and the church’s role, engaging Presbyterians in the work of preventing and alleviating poverty, community organizing, farming cooperatives and SDOP grants for grassroots groups for community led and controlled projects.

“They are doing incredible things in Atlanta,” Johnson says. “There’s a great vision of priesthood and congregational engagement that is happening in the presbytery.”

“It’s exciting to be in conversations about how SDOP can be helpful in addressing poverty in a large city like Atlanta,” Johnson says.

The committee works to promote justice, build strong communities and achieve economic equity by supporting community-based organizations to enhance the work they are already doing. SDOP does not play a role in leadership of these groups but rather seeks to walk alongside them in their efforts.

In the Atlanta area, SDOP has supported projects such as Life Unlimited, a group of ex-offenders working to address their specific challenges; Friends of Collier Heights, addressing health and wellness; and Georgia Avenue Coming Together, which has launched efforts such as a cooperative restaurant for lower income families.

Since SDOP funds community and not church projects, it is promoting its Atlanta workshops and forums beyond the Presbyterian Church community, appealing to all who would be interested in the topics the events will be addressing.

This is not the first time SDOP has paired community engagement with a meeting. In February 2018, the committee engaged with the community of Charlotte, North Carolina in conjunction with a meeting. After that successful event, SDOP is looking forward to building on the effort in the heart of the Peach State.

“Atlanta is a big deal,” Johnson says. “We’re really looking forward to making those connections, lifting up the issue of poverty and talking about how we can work together.”