Vital Congregations gathering preacher: ‘Become co-conspirators in the work of the gospel’

LOUISVILLE — During the final worship service at the Vital Congregations virtual gathering last week, the Rev. Shanea Leonard challenged nearly 100 participants to become co-conspirators in the work of the gospel.

Preaching from Matthew 9:35-10:1, Leonard, associate for Gender and Racial Justice in Racial Equity & Women’s Intercultural Ministries at the Presbyterian Mission Agency, said this task has never been more necessary than during these times of trouble.

Living in a global pandemic with global warming and high unemployment in a fragile economy, with wars and rumors of wars flying in the midst of a social uprising and the final 70 days of an action-packed election cycle leaves Leonard feeling like it’s far too much.

“As I delved into this passage, I was reminded again that God sees us and knows our situation,” they said, “and is an ever-present help in trouble.”

God sees and knows what has been made abundantly clear, Leonard said, that once again Black and brown bodies are not safe while walking, jogging, driving or playing. 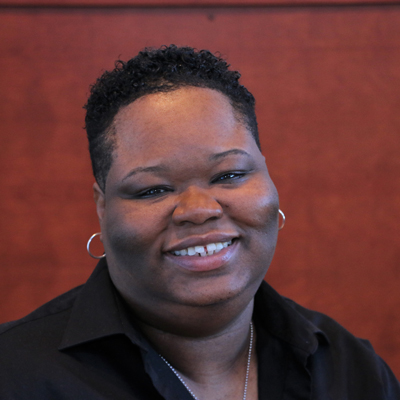 “Not even our homes, or while sleeping  in our homes,” they said. “The sin of systemic racism and the ugliness of white supremacy culture are there for all of us to see.”

As Jesus was going about the work of ministry — proclaiming good news and healing every disease and sickness — he “saw the crowds,” as Matthew’s gospel puts it.

Surely, Jesus saw them before, Leonard said. After all, the discriminated against, the disenfranchised and those treated unfairly are a persistent part of daily living. But this time, Jesus stops when he sees the crowd — the ones described as “harassed and helpless” — and has compassion for them.

“It goes beyond feeling deeply for them,” Leonard said. “Translated (from the) Greek, it literally means he was suffering with them.”

For Jesus knew, Leonard said, that mocking or ignoring what another person is going through — or merely acknowledging it — are not faithful responses according to God’s gospel. Instead, the role for the faithful is to suffer with them — responding in prayer and participating in action to meet the needs of people who are right in front of faithful people.

“Prayer is our number one tool in dismantling racism, eradicating poverty and creating vital congregations,” Leonard said, a reference to the three focus areas of the Presbyterian Church (U.S.A.)’s Matthew 25 invitation.

But then Leonard asked those gathered to notice that Jesus didn’t pray for only the ones he had compassion for. He also prayed for laborers to join him and his disciples in the work of “driving out impure spirits and healing every disease and sickness.”

As you do this work of “healing from harm,” Leonard said there will be colleagues along the way who don’t necessarily have the same morals or ideals that you do. They may not even have your best interests at heart, Leonard said, but they will work with you as long as the work benefits them.

Leonard said there will also be comrades who will work on certain things as long as it’s something they care about. For example, they might fight for the right to vote, but not to dismantle systems of racial inequality in their school districts.

And then Leonard spoke about co-conspirators — those who take up the cause as their own. Seeing value in achieving the goal, they work for the well-being of all, whether they’re in the room or not.

“Co-conspirators look for ways to raise the voice of the harmed —and silence the threat of those who cause harm,” they said. “They champion justice in the session meeting, even when there is no one of color at the table.”

Leonard said this is what God is calling the church to be: co-conspirators in the work of the gospel to “embody the spirit of liberation for all who are oppressed.”

“I don’t know about you, but I give God my ‘yes,’” Leonard said. “’Yes’ to the movement of the Spirit. ‘Yes’ to fight for liberation and equality. ‘Yes’ to the fact that my life — Black lives —matter.”