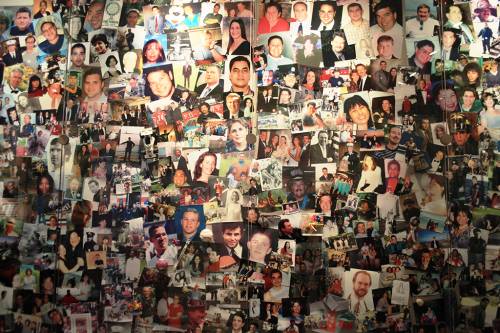 LOUISVILLE – For the Rev. Jon Walton, September 2001 was supposed to mark the start of a new ministry. He had just become pastor of the First Presbyterian Church of the City of New York and his first sermon was September 9th. But any anxiety about his new job quickly evaporated two days later when two planes flew into the World Trade Center claiming more than 2,600 lives.

Like everyone, Walton was stunned by what had transpired. The church was 20 blocks from ground zero and he and his members didn’t know what to expect.

“We immediately opened our doors which face Fifth Avenue and people just started pouring in from lower Manhattan,” he said. “Volunteers, deacons, elders and neighborhood residents quickly mobilized to help. There was no public transportation, subway, bus or car movement other than emergency vehicles headed downtown.”

Those who had escaped the destruction and debris walked the many blocks and were directed toward St. Vincent’s Hospital, a receiving center just a few blocks from First Presbyterian. Walton said there were so many people lined outside of the hospital that staff came seeking volunteers to assist.

First Presbyterian opened its doors for people to come and pray. The attacks had knocked out cell towers and people couldn’t use cell phones. The church allowed those who came in to use their landlines to reach families.

“So many people had called their families while trying to leave the Trade Center before the buildings collapsed. Two women from our church called their husbands to say they were safe and were on their way out of the building, but they were never heard from again,” said Walton. “So this kind of communication was reassuring for the people who were away from all of the activity.”

An hour north of the city, the Rev. Paul Alcorn came to work at Bedford Presbyterian Church in Bedford, New York. One of the church’s nursery school staff members came in and told him about the attacks at the World Trade Center.

“We started watching the news and all of this information started coming in about the first tower being hit and then a second one. Before long, all of us gathered in a classroom and just said a prayer together,” said Alcorn. “It was one of those times when you knew that people in our community were in those buildings.”

Alcorn and his staff spent the rest of the day calling every member to see if they were okay and whether their family members had been accounted for.

“The rest of the day we planned a community gathering for the evening. The church sits on the green in a very New England-style little village,” he said. “Our church functions at times like the community church. We wanted to give people a chance to be together that night.”

Alcorn says his congregation did not lose any members in the attacks but two community men were killed. “It’s a small enough community that everybody knows everybody,” he said.

The Rev. Doug Phillips is a trauma unit chaplain at Westchester Medical Center in Valhalla, New York. Once the news came out about the attack, Phillips says they were told to prepare for mass casualties.

“There was a rumor that 30,000 people were in or near the towers. Under emergency procedures, it was understood that local hospitals would stop sending us patients so we could be prepared for mass casualties,” he said. “We were ready. But once the hospitals stopped sending patients, there was this eerie silence as we sat there wondering when people would start coming. We sat and waited but they never came.”

Aside from two firefighters, it became clear that no one else was coming. Hospital administration began sending people home. But Phillips says there was still a lot of anxiety among staff.

“People were frantically trying to get in touch with family members that worked near the towers, but they didn’t have much luck,” said Phillips. “When I left to go home, I could see military helicopters flying low. There was no traffic on the roads and a great deal of paranoia.”

Over the weeks and months that followed the attacks, the churches in and around New York City felt a great outpouring of support from communities around the world.

“We were the recipient of a great deal of kindness and generosity,” said Walton. “Sunday School classes sent homemade cards and churches in Chicago and Tuscaloosa sent financial support to help those in need.”

Walton says the money was used to set up temporary housing and to support the church’s homeless ministry.

“We had a lot of opportunities for people to be in prayer and discuss their needs, concerns and fears,” he said. “Our neighborhood was plastered with photos of missing people and you had this sense of being in a war zone. We continued to keep the church doors open feeling that spiritual needs were a very important ministry.”

Phillips says a firefighter who had been working to clear the rubble showed up at the hospital a few weeks after the attack with respiratory problems.

“He had been working at this for quite a while. He said we would be seeing a lot more of them over time,” said Phillips. “He was right. We still see people who have been damaged by the destruction of the towers. Other patients come in now, still talking about what happened that day.”

In Bedford, the hurt and the shock continued for months.

“Not only were two community members lost, but so many people in the community worked in the financial district of Manhattan,” said Alcorn. “A lot of people knew not only the two men who were lost but had colleagues in other banks and businesses. There were ripples of impact around that.”

As the years have passed, the number of memorial gatherings on September 11th have decreased, but all three say they’ve seen a greater sensitivity across cultural and religious barriers that they hope will continue to flourish.

The Bedford Presbyterian Church and other interfaith groups in the community began to have conversations around Islam and a desire to learn more about it.

“Out of those conversations grew an interfaith youth program for high school students from the surrounding area,” said Alcorn. “Now, 20 to 40 students—Christian, Jewish, Muslim and unaffiliated—meet four or five times a year. The intention is for the students to learn about different faiths but also talk about their own faith.”

Alcorn says the church has built relationships with other faiths and will often share meals and prayer services together.

“Many of our doctors and nurses are Arab and Muslim so there has been a lot of sensitivity training,” said Phillips. “One of the ER doctors is a good friend of mine who bore the brunt of a lot of people’s anger after the attack. There’s been a softening of feelings and we realize we are all neighbors, living near each other and working together so there is less ‘us versus them.’”

Walton says the experiences on September 11 forced them to look at a number of questions about God and where God is when needed most.

“I think about how issues of our peacemaking and need for and desire for peace are in a different context now,” he said. “It’s God’s peace we are seeking to be guided by. We are driven to have a faithful understanding of the kind of peace that passes all human understanding and what we need in our hearts and our world.”