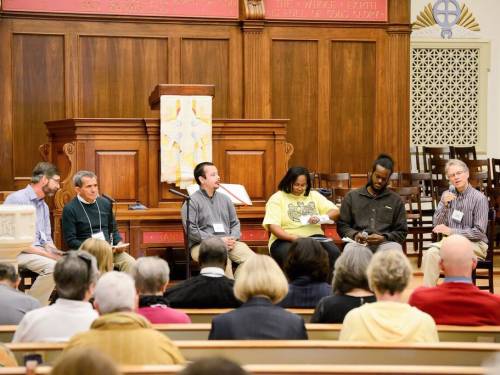 LOUISVILLE – Every year, an average of 200 Presbyterians gather in Washington, D.C., for Advocacy Training Weekend as an opportunity to worship, attend workshops and fellowship with other Presbyterians and Christian denominations. But this year’s attendance for Compassion, Peace and Justice Training Day is hitting record levels and people are still signing up with less than two weeks to go.

CPJ Day is held each year at New York Avenue Presbyterian Church, prior to the start of Ecumenical Advocacy Days. But this year’s registrations have far exceeded expectations, and the number of first-time attendees outnumber returning participants.

“We’ve been amazed at the response to this year’s conference. We’ve never had this many people to register and it’s amazing to see that more than half are first-time attendees,” said Catherine Gordon, representative for international issues with the PC(USA)Office of Public Witness and organizer for the daylong event. “I think people are seeing a strong need for the faith voice in Washington right now—love of neighbor is in short supply.”

The theme for this year’s conference is “Confronting Chaos, Forging Community—and Battling Racism, Materialism and Militarism.” Keynote speakers for this year’s event include the Rev. Kevin Johnson, pastor of Calvary Presbyterian Church in Detroit and the Rev. Floretta Watkins, the first African-American female chaplain with the United States Air Force National Guard and pastor of Seigle Avenue Presbyterian Church in Charlotte, North Carolina.

In addition to the keynote speakers and panel discussions, attendees will have an opportunity to take part in a number of workshops including one titled “Antiracism: Next Steps,” led by the Rev. Mark Koenig, coordinator of Leader Development, Racial Justice and Networking; and the Rev. Alonzo Johnson, coordinator for Self-Development of People.

“Fifty years after the Rev. Dr. Martin Luther King Jr.’s ministry and death, systemic, structural racism remains an open wound in our nation. Unjust economic and social structures, built on white supremacy, violate and distort the lives of black and brown people,” Koenig said. “As followers of Jesus, we are called to address the chaos and violence wrought by racism and build a community of justice and co-equality.”

Another workshop entitled “Creating Spaces of Welcome: Acting in Solidarity with Refugees and Immigrants of all Faiths and Nationalities” will be led by Amanda Craft, manager of Advocacy, Office of Immigration with the Office of the General Assembly.

“As people of faith, we often struggle with how to welcome the ‘stranger/neighbor’ in our midst. This is nothing new,” Craft said. “Biblical texts have been dealing with this since Levitical law. And then sometimes, we want to jump beyond our neighbor into action. This workshop is about finding a place of intersection and connection—the space where God operates.”

Other participants include Amal Nassar, who along with her family runs the West Bank farm known as Tent of Nations in Palestine. For the past 20 years, the Nassar family has hosted people from all over the world, teaching them about the land and how they face struggles with the Israeli government in a nonviolent way. Nassar says the farm continues to face a number of challenges as the surrounding land is absorbed by Israeli settlements.

“Land confiscation continues as well as uprooting of our trees. We still believe if they uproot one tree from the farm, the plan is always to plant tens of them,” she said. “This way we keep hope alive until the Son of truth and justice appears.”

Nassar says the church’s ongoing support is important to them and she plans to share that with attendees in Washington.

“We want more and more people to come and see the farm because the international presence is very important for the Tent of Nations,” she said. “Your solidarity is needed by sending regular volunteers. We also need your prayers.”

More than 15 workshops are scheduled. CPJ Day and Ecumenical Advocacy Days will begin in Washington on Friday, April 21. Click here for more information.

Ministries: Compassion, Peace and Justice, Office of Public Witness, Presbyterian Committee on the Self-Development of People, Leadership Development for Leaders of Color