Dance craze to top-rated South African song with phrases like ‘Save me! Come with me! Don’t leave me here!’ is sweeping most of the world — except the US 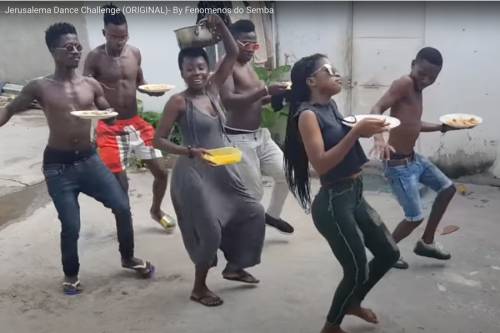 Holding plates to convey a sense of happiness despite the difficulties they face, this dance group from Angola started the Jerusalema Dance Challenge (Photo courtesy of Fenomenos de Semba dance group)

The question came in an email from the Rev. Catherine McMillan, a minister of the Reformed Church of Zürich in Switzerland.

Presbyterian News Service last spoke with McMillan in October. As Presbyterian Church (U.S.A.) churches commemorated Reformation Sunday last fall, she reflected on how Swiss reformer Ulrich Zwingli — who took his post as the people’s priest seven months before the bubonic plague struck Zurich — could help the churches discern how to meet the challenges of COVID-19.

But on this occasion, McMillan wanted to talk about a dance craze sweeping the world based on the song “Jerusalema” from South Africa. The song, which an article in the Guardian newspaper describes as “a lamentation for God to take the singer to the heavenly city,” topped South African music charts in December 2019. Then in February 2020, as COVID-19 lockdowns began to spread worldwide, a dance group in Angola created this video under the hashtag #JerusalemDanceChallenge. A global frenzy was born, which can be seen here:

The beat to the song comes from an Angolan wedding dance. McMillan said the song’s composer, Kgaogelo Moagi, better known as Master KG, felt it was very spiritual. She said he “wanted a spiritual melody and spiritual words to go with it,” which, according to numerous reports, came to him and singer Nomcebo Zikode late one night as he played the melody for her several times at his recording studio.

“In Africa, Jerusalem is a place of longing,” McMillan said. “Even though ‘new’ isn’t in the song, I interpret the song to be a prayer of longing for the New Jerusalem of Revelation 21.”

And with phrases like, “Save me! Come with me! Don’t leave me here!” (the translated lyrics are here), McMillian said the song picks up on “a longing for comfort and God’s presence that people are feeling all over the world.”

According to McMillan, lots of Swiss were joining with people all over the world to create Jerusalema dance videos. Contributors included police, hospital staff, students and soccer teams.

On Jan. 23, the newly elected and first female moderator of the Protestant Church in Switzerland, Pastor Rita Famos, wrote this to a social media chatroom of ministers: “When are we going to do the Jerusalema dance?”

“Immediately my smart phone started buzzing,” McMillan said. “Ministers from all over Switzerland were volunteering.”

Within a few days, the ministers had developed a plan. Regional videos would be made and then edited into one clip. McMillan, who organized one of two groups in Zürich, said they  “danced up a storm in the main portal of the Grossmünster [church] where Zwingli started the Reformation.” In the first scene of the video, McMillan is seen coming through a doorway wearing her PC(USA) stole:

The social media chat group #churchunited, which formed last spring during the early stages of the pandemic to produce online worship services with contributions from across Switzerland, placed the dancing video ministers video on its YouTube channel two weeks ago. Already more than 42,000 people have watched the video. In addition, a shorter version of the video, uploaded to a Swiss radio station, has been viewed nearly 800,000 times, McMillan said.

“Most of the comments I’ve read have been very positive. People were surprised,” she said. “I hope someone analyzes them because it’s like a free survey to see how the church is viewed.”

The Rev Catherine McMillan said she believes the Jerusalema Dance Challenge is popular around the world because the music is uplifting. (Screenshot)

McMillan believes the Jerusalema Dance Challenge is popular around the world because the music is uplifting. The beat is an added plus — both of them much need during the pandemic.

“It gets people together with souls touching, even if they’re not physically touching,” she said.

Asked to hazard a guess why the dance challenge hasn’t taken off in the U.S. — this version was recorded in New York City’s Times Square in November — McMillan had a couple of theories.

“The U.S. has been very preoccupied with itself and has always been a bit isolationist when it comes to culture,” she said. “Songs in other languages aren’t played as much and movies with subtitles aren’t popular.”

After seeing video featuring dancing Reformed pastors, some of McMillan’s parishioners began practicing the dance steps at home, then asked her if they could dance in church, which they did on Valentine’s Day. About 20 people ranging in age from 7 to 80 stayed for the Jerusalema dance. Sadly, there’s no known video of their shared experience, McMillan said.

“It was so exhilarating for some of them,” McMillan said. “It’s like a sacred dance with arms raised in praise. For me it really was worship.”

Born in Scotland, McMillan was raised in the United States. She earned a bachelor’s degree  Davidson College, her Master of Divinity at Union Presbyterian Seminary in Richmond, Virginia, and was ordained as a PC(USA) minister.

“Please issue the Jerusalema Dance challenge for me to Reformed ministers in America,” she said, “from coast to coast.”