A lifeline for students and pastors in need 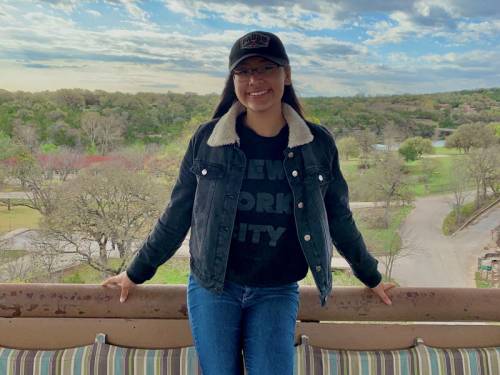 For Sarah Valentina Hernandez Solache, the colorful city of Zitácuaro in the Mexican state of Michoacán was, and always will be, home. But she admits that it simply wasn’t a safe environment for her.

“I had an amazing childhood there,” said Solache, who was raised Presbyterian in the Iglesia Nacional Presbiteriana Getzemani in Zitácuaro. “Mexico is beautiful, with the best climate and the best food ever. But it’s also a really dangerous country.”

Solache said the ongoing violence against young girls that terrorized her community while she was growing up was one of the primary reasons her parents decided to send her, like her older sister before her, to pursue her education in the U.S.

Both sisters are now graduates of the Presbyterian Pan American School (Pan Am): the eldest is a Houston-based architect, and the youngest is a first-year, pre-med student on a full scholarship at Schreiner University in Kerrville, Texas.

Pan Am, located in Kingsville, Texas, is an international, college-preparatory boarding school related to the Presbyterian Church (U.S.A.). Established in 1911, the school equips young people for lives of Christian leadership in the global community. Gifts to the Christmas Joy Offering, a Presbyterian tradition since the 1930s, help Pan Am provide scholarships to students like Solache. The annual special offering distributes gifts equally to the Assistance Program of the Board of Pensions and to Presbyterian-related schools and colleges equipping communities of color.

Because of Solache’s near-perfect academic transcript and her impressive list of extracurricular, church and community activities during her four years at the school, it would only be reasonable to assume that the accomplished 17-year-old had an easy time of it. She didn’t.

“I make it sound like it was all fun and a beautiful world, but really it wasn’t,” said Solache, who arrived on Pan Am’s campus at the age of 13 with “zero” English skills. “My first year was really hard, not only because I was struggling to learn the language and to adapt to the culture, but I was also living alone.”

And while she may have been rooming alone, it was at Pan Am that Solache came to know that she was never truly alone. “Coming to this Christian community is where I actually found myself and my faith, and where I knew that I loved God,” she said. “I found my blessing here.” 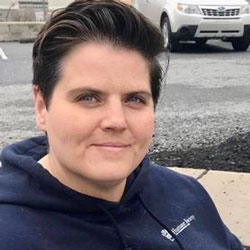 Meg Shoeman Courtesy of the Presbytery of Carlisle

Like Solache, the Rev. Meg Shoeman has had to contend with people’s perceptions that her life was problem-free. “People tend to think if you’re in ministry in some capacity that you’re probably fine and you don’t have any needs,” said Shoeman, “but we’re all human and needs do arise.”

Shoeman, who earned her M.Div. from Pittsburgh Theological Seminary in 2007, confessed that hers has been a “very long journey” since graduating. Unlike many of her classmates who sought ordination right after graduation, Shoeman — because she came out as gay in the years before the PC(USA)’s constitutional prohibition of gay and lesbian ordination was removed — left the ordination process and chose another path.

“After graduation, I started working at an animal shelter, which I thought would be temporary, but I ended up being there a lot longer,” she said. “I remember walking down the steps of the shelter one day and having this fleeting thought that church is a thing of my past. It was crushing.”

But her fleeting thought was just that. Providentially finding a red shirt hanging in her closet just ahead of Pentecost Sunday that year, Shoeman put it on and went to church. Not long afterward, she reentered the ordination process under the care of Market Square Presbyterian Church in her hometown of Harrisburg, Pennsylvania.

After completing all of Carlisle Presbytery’s candidacy requirements, Shoeman accepted a full-time call at Children’s [Hospital] of Alabama in Birmingham, to which she was ordained in 2018. Although the position was a great fit, the culture wasn’t. A little more than a year later, she returned to Harrisburg without a plan.

“I came back with the idea of updating my PIF [personal information form] and seeking a call,” she said, “but it didn’t happen.”

Shoeman thought she would give herself maybe six months or a year, and then COVID-19 happened. “The coffee shop where I was working part time shut down, and I didn’t have my normal source of income. That’s when I knew I really needed some financial help,” she said.

Fortunately, the Rev. Cheryl Galan, interim executive presbyter for the Presbytery of Carlisle, was standing by with two timely recommendations.

“Because Cheryl knew that I’d been seeking a call and that I was really in need of purposeful work, she suggested that I apply for the position of temporary, part-time stated clerk for the presbytery,” said Shoeman.

Galan’s second suggestion was similarly a lifesaver. “When I learned that Meg was struggling financially, I thought immediately of an Emergency Assistance Grant from the Board of Pensions,” said Galan, “and I knew we had some emergency funds available in the presbytery to match their grant.”

The Board’s Assistance Program is available to plan members who experience a period of hardship — such as a significant decrease in work due to the pandemic — or a crisis event.

“My experience with the Assistance Program has changed my understanding of who needs help,” Shoeman said, “but I’ve needed help. I think the beauty breaks through in the fact that there was someone there to say, ‘Hey, did you know that there’s help?’ Cheryl paid attention and reached out to me, even when I wasn’t explicitly stating my needs. I think that people in the church do care about each other and notice and respond to each other’s needs.”

Supporting those in need 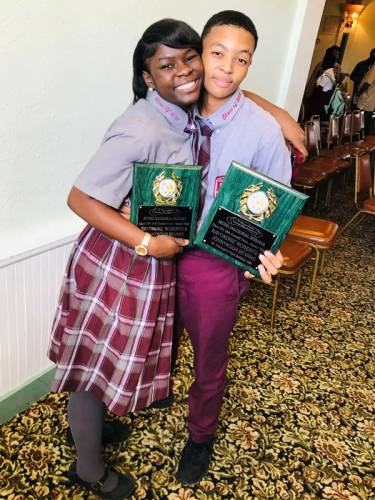 Unexpected needs also caught Johnykqua Bevans and Rayondre Roberts unawares. The second cousins, both juniors at Stillman College in Tuscaloosa, Alabama, are citizens of Grand Bahama Island, which was struck hard by Hurricane Dorian late in the summer of 2019. Both were originally recruited to attend the Presbyterian-related school and join its nationally renowned concert choir.

When they first arrived, Bevans and Roberts knew very little about Stillman, its culture or the Presbyterian Church (U.S.A.). Because of Stillman’s history with the PC(USA), Bevans and Roberts have been, in effect, ambassadors for the denomination as members of the college’s choir, which had an extensive touring schedule before the COVID-19 pandemic brought all rehearsals and live concerts to a halt.

Among the highlights that Bevans and Roberts fondly recall were a trip to San Antonio, where they sang for the funeral of a former college board member, and an annual concert at Westminster Presbyterian Church in Birmingham during Black History Month, where both cousins had solos.

“You get to see the expressions on people’s faces, with many people crying because of the way we sing,” said Bevans. “It was really nice to touch others’ hearts.”

Bevans said that she became even more grateful to the PC(USA) after Hurricane Dorian hit and devastated their island home. Both Bevans and Roberts lost family members in the natural disaster while they were away at school. They were embraced and supported by their classmates, faculty, staff and administration until they could return home to be with their families over Christmas.

In fact, when the president of Stillman became aware of the devastation affecting these students’ families, she contacted Presbyterian Disaster Assistance, which responded with additional financial assistance to help cover costs not included in the two students’ scholarships.

Despite the changes in campus and academic life brought on by the pandemic, both Bevans and Roberts are looking forward to the future. Their dreams are now more than possible thanks to the gifts of generous Presbyterians.

“I think a lot of people may not realize how many lives they can affect just by their support,” Roberts said. “It’s a simple fact when they give students a scholarship — especially those students who are really in need — it’s the best thing that could happen to them. It changes their lives.” 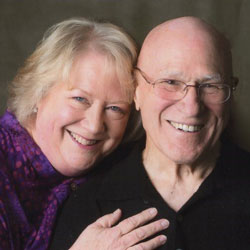 Jack and Kate Eisel Courtesy of the Presbyterian Mission Agency

In another part of the country, Jack and Kate Eisel’s lives were also changing. The couple met in 2009 at Zephyr Point Presbyterian Conference Center in Zephyr Cove, Nevada, where Kate was the conference manager and Jack, then a recently retired pastor, was volunteering in the maintenance department.

Jack, a former physicist, chemical engineer and researcher for the Naval Weapons Center, served 15 interim pastorates over 25 years in 12 different presbyteries throughout the western U.S.

“I found that interim ministry was in many ways an extension of the laboratory experience,” said Jack. “That experience of walking into a new situation or a new problem or project where you assess the issues and the lay of the land, and then figure out how to move forward, is very helpful.”

These days both Jack and Kate candidly admit that moving forward in their own post-retirement lives has similarly required some careful planning. “When we first retired, life was extremely restrictive,” Kate said. “I often had to ask myself, ‘Can I really go get that carton of milk right now?’ ”

Because Kate had lost her job unexpectedly when she was not yet of retirement age, the couple initially found themselves relying heavily on Jack’s modest assets, including a small house he owned in Sacramento. “Fortunately, we had a home to go to, a roof over our heads, for which we were really grateful,” Kate said. “And although it was wonderful that we didn’t have a mortgage, Jack’s Social Security and pension were very modest, so we still wondered how we were going to pay the bills and put food on the table.”

As a minister himself, not to mention the son of a Presbyterian minister, Jack had always known that help was available through the Assistance Program of the Board of Pensions, a resource he occasionally commended to his colleagues. He just didn’t know that one day he might need that help.

“I knew it was there, but it had never occurred to me that I might need it,” Jack said. “But the big dental bills, the surgery bills and major car repairs — you just don’t expect all that. The Assistance Program has been an incredible blessing.”

“We were surprised by the help to begin with,” Kate added. “And then it continued beyond what we had expected. It has always felt like a friend coming alongside you saying, ‘God will provide, and we’re going to be part of that provision.’ ”