Stewart Pattison, Adelite Hategeka, Ken Tracy and Rose Bryant are just some of the names of those whose lives, right now, are being affected by Presbyterian giving and support during the Christmas Joy Offering. Each person’s story of challenges and obstacles is different, but they all have this in common: Their lives have been enriched by the generosity of Presbyterians.

Improving the quality of life 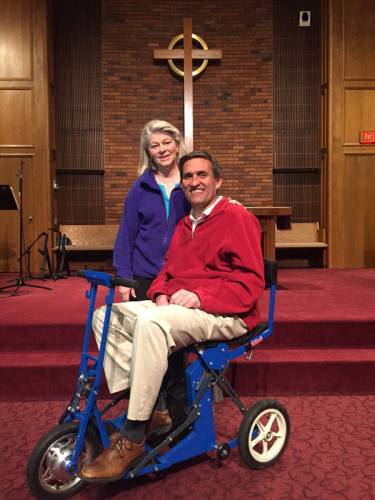 When the Rev. Dr. Stewart M. Pattison was diagnosed with multiple sclerosis, he wasn’t sure what the future would hold — especially when it came to him continuing to serve as head of staff at Community Presbyterian Church in Lombard, Illinois. With mobility becoming harder as the disease progressed, Pattison, though, was able to continue his pastoral duties longer than he had imagined thanks to a scooter he nicknamed “Di Blasi,” after the company that manufactures them.

Pattison had received a grant from the Assistance Program of the Board of Pensions and the Presbytery of Chicago for the purchase of a specialized scooter. Getting the scooter allowed him to continue serving in ministry three years longer than he had planned. Pattison just recently retired from his call. Retirement meant a new chapter in his life, one whose narrative was about navigating the world of disability.

“What I had to do was go on disability with the Board of Pensions,” said Pattison. But unlike some stories, Pattison’s experience with going on disability was a “completely pleasant experience.”

“The people at the Board of Pensions were well organized, responsive and helpful. If I had to rely on the government, I’d be in trouble,” he said.

Without the support from the Presbyterian Board of Pensions, Pattison would not only not have been able to serve his church longer than expected, but he would be unable to do some of the most basic things many people take for granted, like simply visiting his children.

Pattison said that when you have a disability, having to stay at home is not some temporary edict that many without disabilities have grumbled about during the COVID-19 pandemic. Rather, when you have a disability — and do not get the support you need — staying at home can be a harsh reality. “If I didn’t have the special programs that the Board of Pensions has for me, it would be a permanent stay-at-home order. What they do is really important for me and others like me, so that we can carry on with life even with our disabilities. They’ve helped in ways that have opened up my life,” he said.

Adelite Hategeka was born in Kigali, Rwanda, and grew up in Niger. She graduated this year from the Presbyterian Pan American School — an international, college-preparatory boarding school in Kingsville, Texas. She was able to attend thanks to a scholarship supported by gifts made to the Christmas Joy Offering.

“My favorite thing about the school was the people you got to meet,” said Hategeka. “It is funny that many people say that they met people who became their second family, and it makes sense once you experience the same thing. We relied on each other and learned how to live together as a community. The teachers are also great because they are patient. I did not really know English when I first went there, but I slowly learned with their help.”

During her time at Pan Am, as the school is affectionately called, Hategeka took on several important roles, including campus ministry president, leading the Random Acts of Kindness Program at the school, and organizing a remembrance service honoring those killed in the Rwanda genocide that took place in 1994. These extracurricular activities, though, did not distract Hategeka from immersing herself fully into her studies, especially English and math, which she said were her favorite courses.

“I don’t know if I would have been able to get the education I got if I did not have a scholarship,” said Hategeka. “Pan Am literally became a second home to me.”

According to the school’s website, “graduates go on to lives and professions that bring positive changes to the world by upholding the Christian ideals of love, service and community.” That is exactly what Hategeka hopes to do.

“I am looking forward to college life, honestly. I know it will be different from what I essentially imagined due to the pandemic, but it will be the stage where I get closer to my career goals,” she said. Among those goals is for Hategeka to become a civil engineer. “I want to build homes for other people, so I plan to specialize in structural engineering. It is important to me to provide shelter for families,” she said. 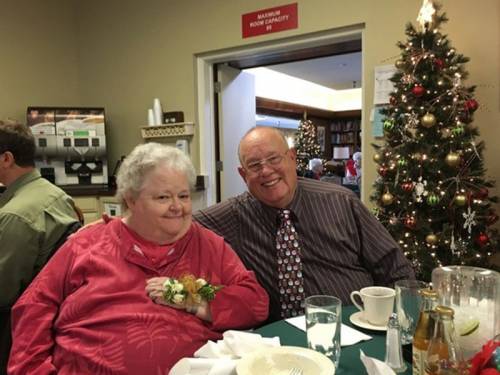 The Rev. Ken Tracy lives in an independent living facility in Pasadena, Calif. The Board of Pensions provides a monthly housing supplement to help not only with his wife Carol’s nursing cost, but also allows Tracy to reside close to her. Carol lives in a nursing home minutes away. Courtesy of Ken Tracy

The Rev. Ken Tracy spent much of his more than 30 years with the PC(USA) helping congregations work through conflict and revitalize their membership. “What I wanted to do was serve what I called ‘troubled churches’ — ones that had conflict within the congregation, lost membership or were hurting financially,” he said.

Tracy’s first call to a troubled church was in Pennsylvania, where he was greeted by a congregation that already had an administrative commission in place to deal with conflict and challenges. He was with the church for seven years, in which he was able to restore the congregation to health, building a strong children’s program and renewed focus on missions.

Tracy had similar successes in subsequent calls, which included stints as an executive presbyter of the Presbytery of Utah and pastor at St. James Presbyterian Church in Tarzana, California, following an earthquake that damaged the sanctuary. He later made his way to the Alaskan tundra, reconnecting him to his earlier passion for serving smaller churches.

It was in Alaska that his wife, Carol, whom he married in December 1965, became mysteriously ill. The best medical care for her would be in Seattle. The trips would be costly. However, thanks to Board of Pensions grants, traveling expenses were 100% covered for the Tracys. “They paid for our flights, hotel, meals, rental car, whatever we needed,” he said.

Turns out, the house where they lived in Alaska, Tracy said, had black mold that affected his wife’s lungs. The couple has since moved from Alaska to Pasadena, California, where Tracy lives in an independent living facility at Monte Vista Grove Homes. His wife, Carol, is minutes away in a nursing home. The Board of Pensions provides a monthly housing supplement that not only helps with Carol’s nursing cost, but also allows Tracy to reside close to his wife. 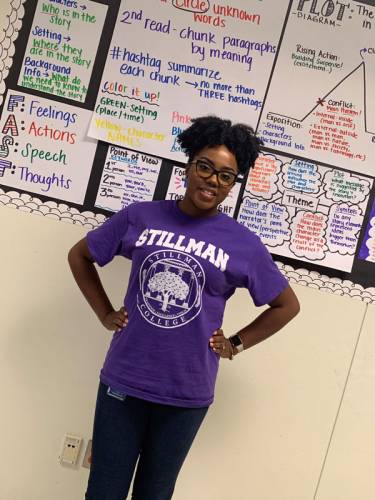 Rose Bryant felt like she was stuck. The single mom couldn’t move forward in her career because she didn’t finish her degree. Bryant decided to take a leap of faith and try student teaching. Her leap led her back to Stillman College, where she finished her degree. She is now a seventh grade English and language arts teacher. Courtesy of Rose Bryant

In 2015, Rose Bryant felt like she was stuck. The single mom couldn’t move forward in her career because she had not finished her degree. She really wanted to get out of her retail job, so that she would have time to spend with her son and could see her family on holidays. So, Bryant decided to take a leap of faith and try student teaching. Her leap led her back to Stillman College, where she’d dropped out of school 12 years earlier.

“I went by the school to pick up my transcript and one of my professors recognized me and asked if I was coming back. I said, ‘No, I’m trying to get a new job,’ but he wouldn’t let it go. He wrote something on a Post-It, folded it up and asked me to take it to admissions. I was walking across campus feeling annoyed and thinking it was something about my transcript,” Bryant recalled.

That note pointed to a grant that would cover her summer classes and would launch her on the path to finishing her degree. “Everything flowed from there. I went back to school in the fall, changed my major to education and was getting straight A’s,” Bryant said.

Bryant became active on campus, serving on the Student Government Association as treasurer. She then became president. She worked to solve problems for students, including improving how they received work study payments and tackling housing issues that she and other single mothers faced.

She now works as a seventh grade English and language arts teacher for the Dallas Independent School District in Texas. She also married earlier this year, and she just bought her first home. Bryant credits that, in part, to the financial aid received through programs like the Christmas Joy Offering, which supports Presbyterian-related schools and colleges equipping communities of color like Stillman College.

As Bryant looks back on her journey, she clearly sees the ripple effect that giving to offerings like Christmas Joy has on people’s lives. Because of a grant supported by the Christmas Joy Offering, Bryant was able to achieve her goal of finishing her degree, which led her to a new career in teaching. Because of her accomplishment, others around her have been inspired to do likewise — to go for dreams that once seemed unobtainable. Among them is Bryant’s younger sister.

“Give as much as you can, because it always helps,” Bryant said wistfully.

Jessica Denson Van Hoy is a freelance writer in Louisville.