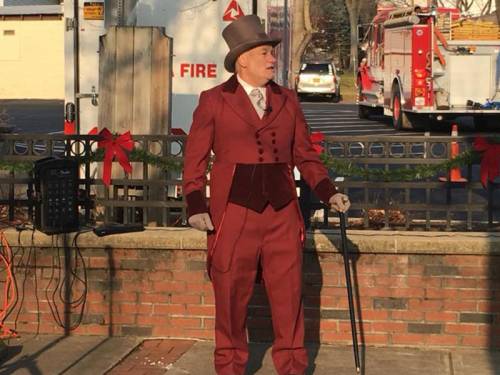 It’s not all Bible stories that the Rev. Tim Coombs tells. Every December, Coombs dusts off his top hat to tell the story of Ebenezer Scrooge in his one-man performance of “A Christmas Carol.” Courtesy of Tim Coombs

The church lectern has been pushed aside and the chancel chairs rearranged — just that morning the good news was proclaimed from that space. Now, in a few minutes, another story will be told. As the last of the stragglers enter the sanctuary, quickly and quietly taking their seats, a man dressed in a Victorian frock coat and top hat walks onto the makeshift stage. After a brief dramatic pause, he begins with the opening words of all good stories — “once upon a time.”

Once upon a time, of all the good days in the year, Christmas Eve, old Scrooge sat busy in his accounting house.

And with that line, the Rev. Tim Coombs is no longer the co-pastor of Trinity Presbyterian Church in Scotia, New York. Coombs is a thespian. He is a storyteller. And he has just transported the 21st century audience to the 19th century world of Ebenezer Scrooge.

For more than a decade, Coombs has been taking his one-man show of Charles Dickens’ timeless classic, “A Christmas Carol,” on the road. Coombs takes the show to churches and other community groups, where the two-hour presentation is often accompanied by a Victorian tea for refreshments. Coombs loves telling this story, as it is one that is dear to his heart — and one he knows by heart, staying true to Dickens’ words. The pastor-turned-storyteller even includes many of the author’s biblical references that movies often leave out.

“I’m not sure why movies do that,” Coombs muses.

Coombs became enchanted with the story of Scrooge in seventh grade, remembering how his English teacher would turn off the classroom lights, light a candle and begin reading to the students.

“I was so engrossed in it,” he said. Little did he know that someday he would be carrying on the tradition of telling stories to others. 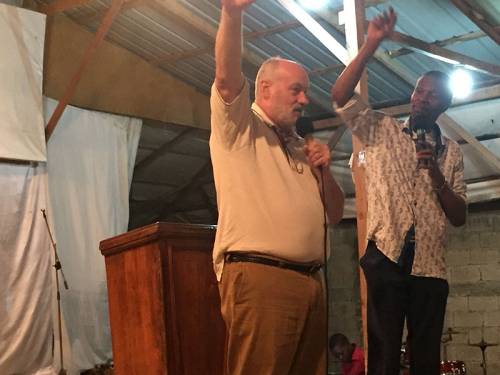 With the help of a translator, the Rev. Tim Coombs brings to life the Bible as he shares his storytelling ministry with those in Haiti. Courtesy of Tim Coombs

In 1995, while attending an educational meeting in Albany Presbytery, a colleague approached Coombs, urging him to attend a synod-sponsored biblical storytelling workshop that was being held at Rutgers University in New Brunswick, New Jersey.

The colleague was insistent. “You need to go to that conference,” Coombs remembers her saying. He brushed it off; she didn’t back off. And so, he went.

“It was love from the very start,” Coombs said of his experience at the conference, which was presented by members of the Network of Biblical Storytellers.

There in a classroom, Coombs, now president of the network, witnessed firsthand how the ancient art of sharing one’s story orally could capture the imagination, help one see things differently and reconnect to familiar words in a new way.

Coombs took it all in, and he took it back to his ministry in upstate New York.

“It has transformed how I approach a sermon and how I preach a sermon,” Coombs said, explaining how he internalizes the Scripture, telling it rather than reading it, engaging others to be in the story with him. Beyond Sunday mornings, Coombs credits storytelling with also transforming his congregation. Just recently, his wife and co-pastor of Trinity Presbyterian, Kathy Gorman-Coombs, shared how a woman’s group she was leading came to life as those gathered freely shared their stories of faith.

Coombs’ storytelling ministry, though, is not just local anymore. Last summer, he was in Haiti sharing the art of biblical storytelling — an important mission, as 40 percent of Haitians cannot read. Even those who can are not encouraged to read Bibles, nor do they often hear the Bible read in worship, Coombs says.

Back in the States, Coombs has also created a new worshiping community around the art of storytelling. The community is called Parallels, which Coombs explains invites people to come and hear a Bible story and then hear personal stories that relate to the Scripture. The idea for Parallels came when Coombs heard a definition of what Jesus’ parables were at a Network of Biblical Storytellers festival.

“A parable is story told in parallel to another story,” Coombs says.

The Parallels community meets monthly at Charlton Freehold Presbyterian Church in Ballston Lake, New York. Coombs chose that location because it is a sister church in his area that needed some attention.

“I wanted to bring some energy to their church,” he said. In addition to monthly storytelling sessions, during each season Parallels meets in a tavern across the street from the church for what Coombs calls “Story Slams.” The new worshiping community has had a small but steady following, Coombs says.

But attendance might pick up when word gets out that Coombs will be on Broadway this December.

“I’ve been invited to do “A Christmas Carol” at the Broadway Presbyterian Church in Manhattan,” Coombs laughs.

Donna Frischknecht Jackson is the editor of Presbyterians Today and a rural pastor in Vermont. She plans to ask Tim Coombs for his autograph the next time she sees him at an Albany Presbytery meeting.

Learn more about the Network of Biblical Storytellers at nbsint.org