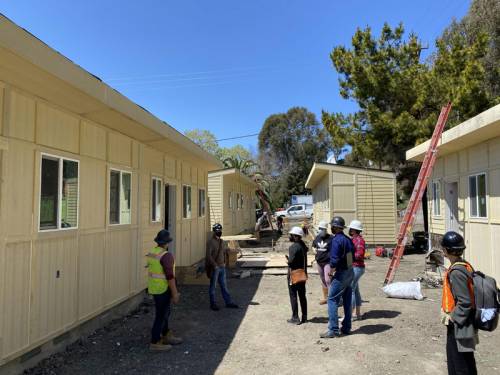 The construction of tiny homes is part of the mission work First Presbyterian Church of Hayward is doing in California to help ease the housing crisis. Courtesy of Jake Medcalf

For several years, tiny homes have been curiosities of minimalist culture: the stuff of home-improvement TV networks and clickbait stories on websites.

In the parking lot of First Presbyterian Church of Hayward in Castro Valley, California, though, a village of five tiny homes is the most visible manifestation of the church’s effort to address homelessness. “We’ve come to the theological place, maybe philosophical, that housing is a human right,” said the Rev. Jake Medcalf, Hayward’s lead pastor. “If we don’t provide housing in our neighborhoods, especially in an area like the Bay, we are literally — I don’t think it’s dramatic, I think it’s real — condemning people to die on the streets.” 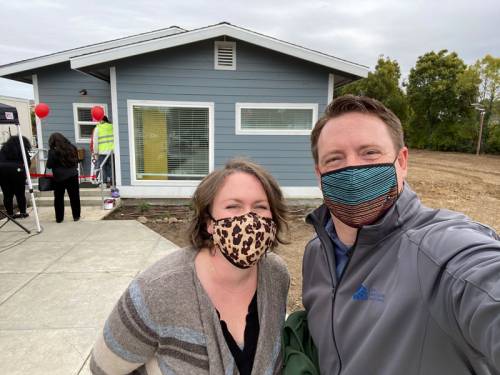 First Presbyterian Church of Hayward in Castro Valley, Calif., created its own not-for-profit to build tiny houses for those in need of shelter. Here, Taryn Sandulyak and the Rev. Jake Medcalf unveil a new unit. Courtesy of Firm Foundation Community Housing

Nestled southeast of San Francisco and Oakland in California’s Bay Area, Hayward serves an area struggling with skyrocketing housing prices. For every person who finds housing, two more become homeless in their community, Medcalf says, and the impact of homelessness can be devastating.

“They have physical health issues that are killing them, they have mental health issues that are killing them,” he said, adding, “Both of those can develop into addictive issues which are killing them, none of which can be made whole without a house. I think to ask them to get physically better, mentally healthy, to get over their addiction, while they’re living on the concrete outdoors really lacks compassion and lacks reality. If churches don’t get involved, I think that they’re just putting their whole head in the sand and letting people really suffer cruelly on the streets.”

The homes, complete with indoor plumbing, electricity and HVAC, are intended as a transitional space for people who are homeless to have a base to build their lives back to a place where they can afford a more permanent residence, something the church also has in its plans.

In 2008, the 218th General Assembly of the Presbyterian Church (U.S.A.) approved recommendations in the report “From Homelessness to Hope,” including “Encourage congregations, presbyteries, synods and other church-related entities to pursue comprehensive responses to the crisis of homelessness and affordable housing.” Presbyterian Church (U.S.A.) congregations are getting involved in affordable housing, from advocacy to building affordable housing units on their properties to address a crisis that is getting worse in the wake of the COVID-19 pandemic and disproportionately impacting people in marginalized communities.

“The financial fallout from COVID-19 is fracturing an already stressed housing system and, if we care about justice, we must create housing solutions that center on equity, combat displacement and ensure environmental justice,” Andrew Kang Bartlett, associate for National Hunger Concerns for the Presbyterian Hunger Program, said in an April webinar about affordable housing presented by the Presbyterian Mission Agency as part of its Matthew 25 invitation. 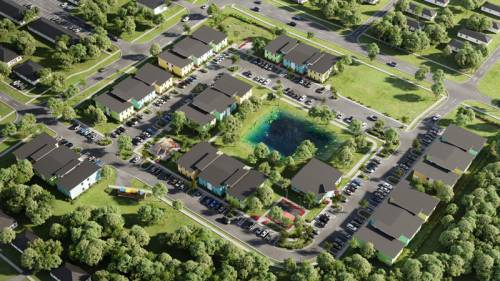 A rendering of the Immokalee Fair Housing Alliance project in Florida that will provide 128 two- and three-bedroom units at or below 30% of household income and able to withstand winds of up to 250 mph. Courtesy of Matthew Bechtel

“I have talked about it in terms of Matthew 25’s focuses on systemic poverty and structural racism,” the Rev. Melana Scruggs, general presbyter of Peace River Presbytery on the western side of the Florida peninsula, said of efforts to create affordable housing for the Immokalee farmworker community in the presbytery. “I think that fits exactly into what our calling is — to make a difference for people who largely either speak Spanish or Creole, and, you know, during COVID didn’t even have good resources about what they were supposed to do during the pandemic? To begin breaking down some of those structural things that make farmworkers vulnerable is part of our faith.”

After the hurricane, when the presbytery and churches asked what the Immokalee community needed, they were told housing. The farmworkers and their families were housed in trailers that were often in disrepair.

The Immokalee Fair Housing Alliance project will provide 128 two- and three-bedroom units at or below 30% of household income and able to withstand winds of up to 250 mph. Donors to the project include Presbyterian Disaster Assistance, which has given $250,000 to the project. Presbyterian Disaster Assistance, the Presbyterian Hunger Program and the Committee on the Self-Development of People (SDOP) are all recipients of the annual One Great Hour of Sharing special offering, and all are involved in supporting affordable housing.

One of the churches SDOP has worked closely with is First Presbyterian Church in Jamaica in Queens, New York, which is getting ready to open the Tree of Life Center, an affordable housing development with mixed-used space at the ground level for social service and community use.

In the first two weeks applications were open for the 174 available units, the Rev. Patrick O’Connor said the center received 37,000 applications, affirming what they were told in surveys.

“We went out and talked to people in our neighborhood, about 1,200 surveys,” he said. “You know, they were really meeting with people in the street and talking to them about what they consider their top five needs are. The building we are creating is reflective of what people told us. Basically, people said that affordable housing was number one.”

Assessing what the community really needs is one of the first things churches that want to get involved in affordable housing should do, O’Connor and other leaders say. They also say churches should not do this on their own.

For the tiny homes in Castro Valley, First Presbyterian Church of Hayward worked with local not-for-profits, government and contractors. It also created its own not-for-profit, Firm Foundation Community Housing, to manage the houses and help churches create other tiny house projects on the West Coast. Medcalf said the company has 10 projects going with as many as 28 homes on one site.

Getting into housing, church leaders say partnerships are essential because housing involves many things outside of churches’ expertise, including financial regulations related to housing.

“Whenever you use the tax credits, financing instruments that are supported by federal guarantees, the Treasury Department manages all of that,” said the Rev. Brian Hamilton of Westminster Presbyterian Church in Washington, D.C., which is undertaking a radical restructuring of its property near the U.S. Capitol to create 123 affordable housing units. “They have a lot of restrictions and a lot of regulations on management, for obvious reasons, because they’re trying to guarantee and protect their investment and the financial well-being of the whole project. It’s not just like you can hire anybody off the street. These are real special skills that have to be brought to the table.”

Washington, like many cities, Hamilton says, is seeing the impact of gentrification as more residents are choosing to live in urban cores over the suburbs. Seeing housing as a need, particularly for older Black residents in the area, the church devised a plan and partnerships that will include a new church facility, mixed-use space and market rate housing in two 90-foot towers on the church’s property.

There are many ways for churches to get involved in affordable housing without major capital projects.

Margaret Mwale, associate for Community Development and Constituent Relations for SDOP, points to Family Promise, an organization with affiliates across the country, as a strong partner for churches. She also recommends learning what efforts are already happening in your community.

“So maybe rather than necessarily starting a new initiative, joining forces with others that are already working on affordable housing and homelessness issues would be most effective,” said Mwale.

Kang Bartlett of the Hunger Program notes that 4% of the One Great Hour of Sharing offering goes to congregation-based community organizing programs, and there are 180 across the country pulling together the efforts of churches to collectively work on issues including homelessness and affordable housing.

Even for small congregations, Medcalf encourages churches to think big. One of the churches involved with Firm Foundation has just 15 members, but it is putting five tiny homes on its property. Several of the churches in this story have just a few hundred members.

Hamilton also encourages churches to be creative in thinking about how they use their own property to meet needs in the community. Years ago, he says, Westminster decided to take pews out of its sanctuary, and the ability to use the space for a variety of purposes has helped the church make invaluable community connections. “We’ve got to get comfortable with leveraging our assets, becoming more entrepreneurial and taking some risks,” said Hamilton.

All of the churches embarking on major structural projects say those are just the latest manifestations of work to serve their communities. “We see this building as continuing to extend the mission of Christ through First Presbyterian Church in Jamaica,” O’Connor said of the Tree of Life Development.

The Tiny Homes at Hayward in California were an outgrowth of the church offering a variety of services to people who were homeless, including allowing people living in their cars to park at their church. And Hayward is proceeding with its own development like the ones at Jamaica and Westminster. “We had the grand opening of the tiny homes, like almost a year ago, just before the pandemic hit in February. An older couple came up to me afterwards and said, ‘Jake, we have never been prouder of our church than we are right now,’” said Medcalf. “That’s kind of in the general feel of our church folks, like it feels like we are getting in the game. People are understanding the story, and the narrative, and the work of Jesus differently because of what this church is doing.”