…be led forth in peace. (Isaiah 55:12). Support to the Peace & Global Witness Offering.
Make A Donation Click Here >
Home › PC(USA) co-moderators reflect on their tenure

Tough talks and a new joy for meetings? 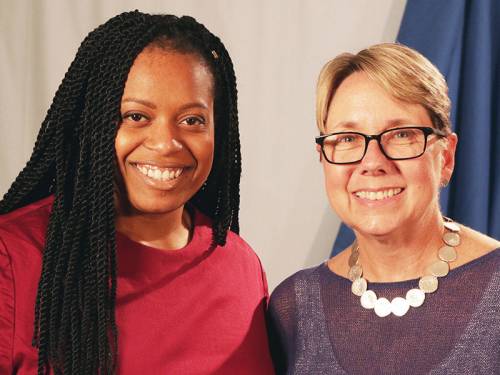 Many questioned whether it could be done. As the Church was weighing in on issues of racism, immigration, fossil fuels and the stormy political climate in Washington, two women took a step in faith and made history in the Presbyterian Church (U.S.A.). Denise Anderson and Jan Edmiston decided two were better than one and became the first co-moderators for the General Assembly at the 222nd General Assembly (2016).

“I felt like a part of an experiment because no one knew what this was going to look like. It’s been an opportunity to try some things, make mistakes and shift things around, even as we’re getting a sense of what’s expected of us and what we might be able to do. The past two years have been incredibly eventful, busy, tiring, but also very cool,” said Anderson. “We’ve gotten to see so much of this denomination that we would not have been able to see if we weren’t in this role. I tell people I have a much deeper appreciation for who we are and what God has equipped us to do.”

Anderson, a pastor from National Capital Presbytery, and Edmiston, a presbytery executive in Chicago, decided to run as a team, knowing that together they could do more for the church than carrying such great responsibility alone.

“We knew each other before we decided to stand for co-moderator and that made a huge difference, so that when we have those low points, we could talk about them honestly with each other,” said Edmiston.

Both Edmiston and Anderson say that from the beginning of this journey, they wanted to address the difficult things that people and churches don’t always want to talk about.

During their first year as co-moderators, they recommended that the Church read and study Waking Up White, a book by Debby Irving that unpacks long-held beliefs and ill-conceived ideas about race. This past year, their suggested read was Always With Us, a book written by a Presbyterian colleague, the Rev. Dr. Liz Theoharis.

“I enjoyed visiting the churches and mid councils, hearing about their experiences and how they found the readings and discussions rewarding and challenging, deepening their racism and anti-poverty work,” said Anderson. “I think that Jan and I found that very encouraging, to know that something is taking root and something is resonating and that Presbyterians are deeply engaged in what we hope will be meaningful work for the nation and the world.”

Edmiston says she’s had many great experiences as she’s traveled across the country, including a visit to Immokalee, Florida, home of the Fair Food Program. She participated in a tour of the area and met with the farmworkers who pick vegetables for some of the major food retailers and restaurants in the United States. Meeting with the families and witnessing the improvements in farmworkers’ lives have made her a major cheerleader for the denomination, which has advocated on behalf of the farmworkers.

A renewed joy for meetings

“Another thing that has surprised me, I have also relished going to presbytery meetings around the country. I have loved it,” Edmiston said. “I have appreciated watching how other presbyteries do their work, and I have been present when people were being examined for ordination and were honored for their service at retirement and different mission projects highlighted at those meetings.”

While these two years filled with meetings have been busy, Edmiston describes her time as co-moderator as inspiring and energizing.

“I’m a lifelong Presbyterian and so I know a lot about our denomination, but I have had the opportunity to meet so many people that I did not know and get a glimpse of the broader ministry that I had not had a personal connection with in the past,” she said. “For example, the Evangelical Synod of Syria and Lebanon. I knew about the ministry work there, but it really makes a difference to actually be there and go talk to the people who are benefitting from the ministries we’ve been involved with.”

Like Edmiston, Anderson also feels that traveling abroad has been enlightening.

“I enjoyed the opportunity to travel around the world with our mission co-workers and to see the deep work they’re engaged in and the ways that Presbyterians and the PC(USA) are partnering with Presbyterians, Christians and interfaith partners and people with no faith,” she said. “I’ve gotten to see what our co-workers are doing in Thailand in the fight against human trafficking. I’ve been to Rwanda and seen how they are lending their gifts to the ongoing healing in that nation following the genocide 24 years ago.”

The co-moderators have served at a time when the Church continues to struggle with declining numbers, but both feel that Presbyterians must still address issues, even those that make them uncomfortable. 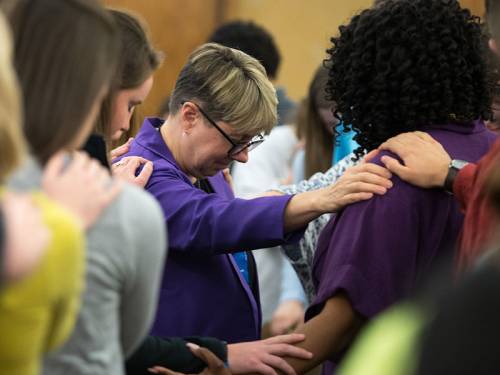 Edmiston and Anderson were friends prior to becoming co-moderators, but the experience of serving together, they say, has deepened their bond. Courtesy of Presbyterian Women

“So many times, we say, ‘That’s the past; let’s move forward; it’s negative.’ But it’s very important for us to be aware of our history,” Edmiston said. “I’m gratified to see individuals, congregations as well as some presbyteries step up and talk about some of the difficult things and try to offer some reconciliation and activism to change the world for good.”

Edmiston and Anderson agree that this “head-on” approach has resulted in positive outcomes.

“I grew up in the South as a Presbyterian, and the culture was not always to talk about unpleasant things. And yet Jesus talked about unpleasant things, and we are called to point out and just look at where we are in the world,” said Edmiston. “I often talk about what’s breaking God’s heart in the community, and I’ve been doing this in talks with churches and mid councils about becoming a 21st century church. That’s different from being the church we have been.”
Anderson is also proud of the organizing work that has taken place around the Poor People’s Campaign and the national call for a moral revival.

“I’m grateful for the ways in which we’ve been able to lend our voices to what the Holy Spirit has already been moving us toward as a denomination in the work of antiracism,” she said. “We’ve been able to truly look at ourselves and our structures in how we are complicit in racism and equity and how we might be able to repent and be honest about that and do better.”

As their term ends, Anderson and Edmiston believe the co-moderator model is something that should continue. The advantage, according to Edmiston, boils down to having a strong relationship.

“Denise and I were at National Capital Presbytery. She was still under care when I left for the Chicago Presbytery, and I admired her writing and I would have her write for my blog. We also had a lot of the same friends. It has been so great. Because we know each other, I can say pretty much anything to her, and she certainly can say things to me,” she said. “We didn’t have to take time to get to know each other.”

This came in handy, Edmiston said, when requests to write something came from a variety of groups.

“There would be times I was swamped and just couldn’t do it. But I trust Denise completely to write something with both of our names on it, and she has done the same for me. I show it to her before it goes public and she shows it to me. But we are on the same wavelength in terms of where we are in our hopes as a denomination.”

Anderson says the fact that the two have remained friends the past two years is a testament to the success of a co-moderator model.

“Not only have we remained friends, but we’ve deepened our friendship. It can prove to be difficult to work with a friend. And what we found is that this work has been very life-giving,” she said. “I hope we’ve been able to confirm the dreams for that model that others have had. I think the chief accomplishment is being able to do something that had not yet been done before.”

As for their successor or successors, Anderson and Edmiston believe many challenges remain in the next two years.

“We, as a church, still have issues that divide us. I think about fossil fuel, for example. We have many Presbyterians who are in the oil and energy business and quite a few who have concerns about the environmental impact of those industries. That conversation will continue,” said Edmiston.

Anderson wishes more could have been done to appoint a Truth and Reconciliation Task Force.

“That work is very much in line with that we are hoping to see the denomination live into. The obstacle there in appointing the task force is that the assembly stipulated that 50 percent must be people of color,” she said. “Even if you are the moderator, getting that many people of color to go out to teach a 90 percent white denomination about racism is a hard sell.”

As they look at the end of their two-year journey, Edmiston and Anderson offer advice that is not just for future moderators, but for all God’s children serving in one way or another. That advice includes realizing that it’s OK to say “no” and to find your own voice.

“Everyone does this differently,” Anderson said. Whoever the next moderator will be, Anderson sees that person or team coming into a denomination “at a very hopeful time.”

“We are poised to do some really cooperative work, God willing, but my advice would be to pace yourself,” she said.

As for the future, Anderson will be able to devote more time as pastor of Unity Presbyterian Church in Temple Hills, Maryland. Edmiston has just begun her new role as general presbyter with the Presbytery of Charlotte.

“People ask if we will stumble over the finish line because we are exhausted, and I don’t think we will,” Edmiston said. “We’ve really loved it, but we will also be happy to give it up too.”