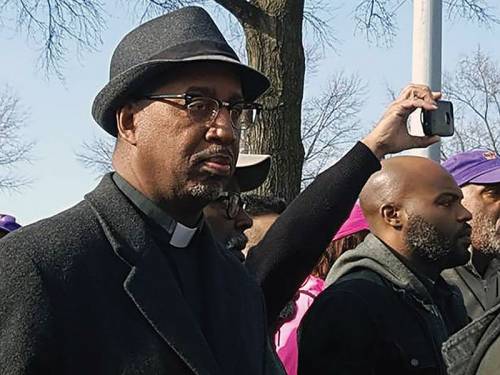 The Rev. Jimmie Hawkins, Associate Director for Advocacy in the Presbyterian Church (U.S.A.), marches in 2020. (Photo courtesy of the Office of Public Witness)

LEXINGTON, Kentucky — The Rev. Jimmie Hawkins, Associate Director for Advocacy in the Presbyterian Church (U.S.A.), will be speaking to a May 20 meeting of the White House Office of Faith-Based  and Neighborhood Partnerships at the invitation of Churches for Middle East Peace (CMEP) about the current conflict between Israel and Palestinians.

“I’m going to basically make a statement because there’s a lot of concern about what’s happening in Palestine,” Hawkins said on Monday. “It’s really good to have the attention of the world, because for the last four years, the world was basically not paying attention to what was going on between the Israelis and the Palestinians. And we need to get that back on track for peaceful resolution.”

In the last week, Jerusalem and other cities have seen the worst violence since 2017 as conflict has grown over Israeli plans to evict families from their homes in a historically Palestinian neighborhood in East Jerusalem to make way for Jewish settlers. Israeli police clashes with Palestinian protesters have grown into exchanges of Hamas rocket fire and Israeli airstrikes the last several days resulting in casualties on both sides.

A major flashpoint of the conflict has been the al-Aqsa Mosque, where Palestinians have been met with police violence while worshiping during the holy month of Ramadan.

“Churches for Middle East Peace denounces the violent actions in Jerusalem and call on the U.S. State Department and Secretary (of State Antony) Blinken to immediately intervene with the Israeli government to stop the aggression toward Palestinians, many of whom are observing Ramadan, and to put an immediate and permanent end to eviction threats against Palestinians in East Jerusalem,” a Monday statement from CMEP said.

Hawkins and the PC(USA) Office of Public Witness, which he directs, want to urge the administration of President Joe Biden to see his campaign call for justice for all Americans in a global context of justice for all people, including Palestinians. Palestinians, they say, are bearing the brunt of the violence in this conflict, inflicted by Israeli police and military.

The office will call on the Biden administration to emphasize the human rights of Palestinians in their discussions with the Israeli government. It is also calling for support of HR 2590, introduced by U.S. Rep. Betty McCollum, D-Minnesota, which aims to make sure none of the $3.8 billion that the United States gives to Israel every year is used against Palestinian people — from violating the rights of children to attempts to displace Palestinians and annex Palestinian land.

In the ecumenical community, Hawkins said the Presbyterian Church (U.S.A.) is often looked to for leadership on Israel-Palestine issues. Part of that stems from the church’s policy on Israel and Palestine, most recently addressed in “Israel-Palestine: For Human Values in the Absence of a Just Peace” developed by the Advisory Committee on Social Witness Policy and approved in 2016 by the 222nd General Assembly. The report recommends response to Israel stem from values grounded in Reformed faith, including the dignity of all people, self-determination of peoples, pursuit of reconciliation and solidarity with those who suffer.

Hawkins said people of faith can be reluctant to speak because criticism of Israel is often met with charges of anti-Semitism. He counters that the criticism is of the Israeli government, not Judaism, and they are two different things.

“It’s become the defensive move that they make, saying you’re being anti-Semitic when really they’re not engaging in what’’ been said,” Hawkins said. “It is criticism of Israel.”

Ultimately, Hawkins says, it is important for the church to speak out, because “It is a justice issue, and we have policy on it.”

The Presbyterian Office of Public Witness and Advisory Committee on Social Witness Policy are Compassion, Peace & Justice ministries of the Presbyterian Mission Agency.